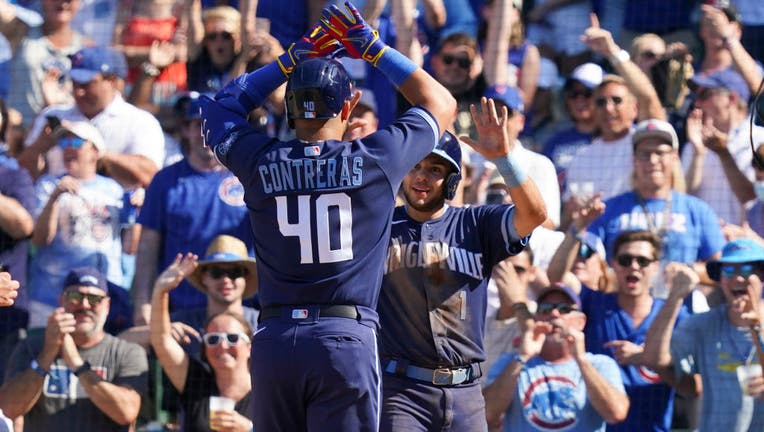 CHICAGO, ILLINOIS - AUGUST 05: Willson Contreras #40 of the Chicago Cubs is congratulated by Nick Madrigal #1 of the Chicago Cubs following a two-run home run during the eighth inning of a game against the Miami Marlins at Wrigley Field on August 05,

CHICAGO - Willson Contreras pounded his chest and pointed toward the roaring crowd. It was quite a return to Wrigley Field for a player many thought would be gone by now.

Contreras hit a two-run homer in the eighth inning in his first home game since the trade deadline, Justin Steele matched a career high with 10 strikeouts and the Chicago Cubs beat the Miami Marlins 2-1 on Friday.

The Cubs looked like they were on the way to their sixth straight loss before Contreras drove an 0-1 pitch from Dylan Floro (0-1) to left-center with one out in the eighth for his 16th homer, waking up a sleepy crowd.

His blast punctuated an emotional stretch that included a standing ovation during the previous home game on July 26.

"That was amazing," Contreras said. "I was looking forward to doing something special right there."

Contreras, due to become a free agent, and Ian Happ got warm receptions when they batted in the first inning. Fans who thought the two All-Stars would be traded didn’t have much else to cheer until the big home run.

Contreras let loose as he rounded the bases and made his way to the dugout. Could he have envisioned a moment like this at Wrigley Field a few days earlier?

"After I didn’t get traded, for sure," he said.

Contreras said he had difficulty focusing as the trade deadline approached. He slumped badly in July with a .149 average, one homer and four RBIs in 19 games.

"I just wanted it to be over, even if I get traded or not," he said. "I wanted to be somewhere that I can play baseball. It didn’t happen. It’s over. I’m still here, and now, I feel relaxed."

Chicago’s only hits prior to Contreras’ homer were singles by Nick Madrigal leading off the sixth and eighth. Happ also doubled in the eighth.

Steele went 4 2/3 innings, allowing four hits and walking one while throwing 93 pitches. Rowan Wick (3-5) got the final four outs for the Cubs, who were coming off a doubleheader sweep at St. Louis.

Miami’s Edward Cabrera threw five hitless innings in his first start since June 12. The 24-year-old Dominican had been sidelined because of right elbow tendinitis.

Joey Wendle singled in a run in the seventh for the Marlins, who lost for the sixth time in seven games thanks to Contreras’ homer.

"Couldn’t write it better, could you," said Steele, who was in the clubhouse. "That’s how he is. He’s a special player. It’s really great to still have him as a teammate."

The Cubs returned left-hander Matt Dermody to Triple-A Iowa after he was the 27th man for Thursday’s doubleheader.

Cubs: Manager David Ross said RHP Kyle Hendricks (strained right shoulder) and OF Jason Heyward (right knee inflammation) are not close to returning. He said he hopes the two veterans play again this season. "I know these guys work really hard and they pride themselves on ... being out there with the guys," Ross said. Hendricks hasn’t pitched since leaving a start at Milwaukee on July 5. Heyward has been sidelined since June 24.