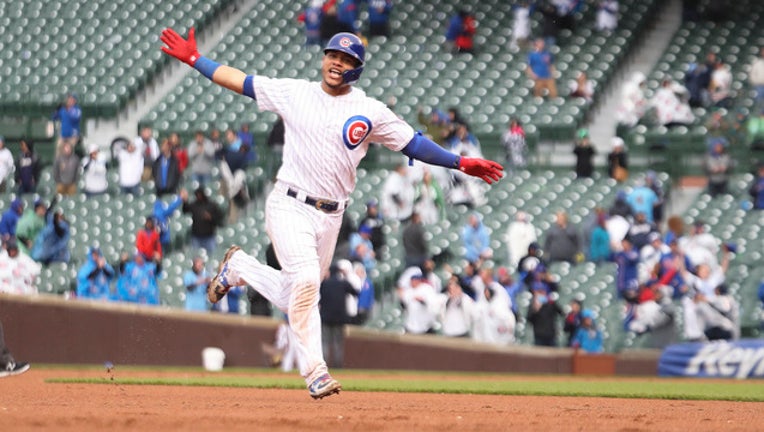 Willson Contreras of the Chicago Cubs rounds the base following his 15th inning walk-off home run against the Milwaukee Brewers at Wrigley Field on May 11, 2019 in Chicago, Illinois. (Nuccio DiNuzzo/Getty Images)

CHICAGO (AP) - As the ball sailed to the left-field bleachers, Willson Contreras spun and tossed his bat toward the Cubs' dugout. He let his helmet go as he approached the plate, got mobbed by teammates and had his jersey ripped off.

The celebration was a long time coming, following a nine-inning stretch of scoreless ball in the Cubs' longest-ever home game against the Brewers. Contreras' 15th-inning homer gave Chicago a 2-1 victory over Milwaukee on Saturday.

Contreras turned on a 1-2 pitch from Burch Smith (0-1), sending a long shot to left that lifted the Cubs their 11th win in 13 games.

Contreras, who struggled in the second half of last season, is off to a strong start, batting .315 with 10 homers. He was understandably fatigued after catching 15 innings on a cool, rainy afternoon, but he still had enough to come through with the big hit.

"I feel good. That was something that I put my work on during the offseason," he said. "Just trying to have good at-bats. But right now, I'm more focused on calling a good game."

The game-ending drive was Chicago's third in five days. Kris Bryant hit a three-run homer in the ninth against Miami on Tuesday, and Jason Heyward connected leading off the 11th the following night against the Marlins.

"I know the type of power that he (Contreras) has and the threat that he is in that lineup," Cubs starter Cole Hamels said. "Especially when he's playing well and he's hitting the ball to all sides of the field, it makes him a lot more dangerous. Just to be able to see what he's able to do, especially after 15 innings of catching, I think that's what we were all talking about. I don't think he really wanted to go out there for a 16th inning."

The Cubs moved back ahead of the Brewers for the NL Central lead after falling into a virtual tie with Friday's 7-0 loss. Milwaukee had its season-high seven-game win streak snapped.

Tyler Chatwood (2-0) struck out seven in four innings to cap a strong effort by the bullpen after Hamels worked seven solid innings.

Hamels gave up a run and three hits in his fourth straight no-decision. Seven relievers combined to give up one hit the rest of the way.

Milwaukee's Zach Davies held Chicago to one run and six hits in 6 1/3 innings. The right-hander lowered his ERA to 1.54 through eight starts. But the Brewers, who won an 18-inning marathon against the New York Mets one week earlier, couldn't push ahead.

"To play two in a week, yeah, not ideal," manager Craig Counsell said. "Came out on the short end this time. The pitching was awesome. It was tough to hit. Frankly the conditions were just miserable for the players out there on the field for both sides."

Both teams scored in the fifth, with Hernán Perez hitting a homer and Albert Almora Jr. tying it in the bottom half with an RBI double .

The Cubs left the bases loaded in the 11th and again in the 13th, after Javier Báez led off with a double off the center-field wall that Lorenzo Cain seemed to think was heading out.

The Cubs activated left-handed reliever Xavier Cedeño from the 10-day injured list and placed right-hander Allen Webster on it because of an inflamed nerve in his pitching arm.

Signed in February, Cedeño had been sidelined since spring training because of inflammation in his left wrist.

Brewers: Milwaukee scratched surging slugger Ryan Braun from the lineup after he tweaked his left hamstring while running the bases in the previous game. Braun struck out as a pinch-hitter in the 12th. The Brewers hope to have him start on Sunday. The 2011 NL MVP had been on a tear, going 13 for 28 over his previous seven games, and he hit his 38th career homer against Chicago on Friday. ... RHP Chase Anderson (right middle finger laceration) is scheduled to start Monday for Triple-A San Antonio.

Cubs: C Victor Caratini will continue his rehabilitation from surgery to repair a broken bone in his left hand with Triple-A Iowa. Caratini began a rehab assignment Monday with Class-A South Bend. ... Manager Joe Maddon said he hopes to start INF Daniel Descalso (sore left ankle) on Sunday. Descalso has been limited to pinch-hitting since he was hurt running the bases against St. Louis on May 4.

Brewers: RHP Jhoulys Chacin (3-3, 5.03 ERA) makes his first start at Wrigley Field since last year's NL Central tiebreaker, when he dominated in a 3-1 victory that gave Milwaukee its first division title since 2011.

Cubs: LHP Jon Lester (2-1, 1.41) tries to extend his string of dominant starts. The five-time All-Star has allowed three runs - one earned - over 18 innings in three appearances since returning from a strained left hamstring.