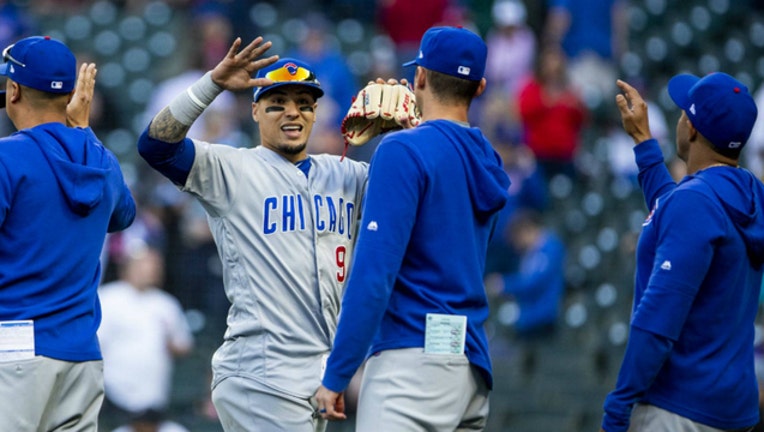 SEATTLE (AP) - Jon Lester was nearly flawless, even when he didn't need to be thanks to an early outburst from Javier Báez and the Chicago Cubs' offense.

Lester and two relievers combined on a one-hitter, Báez homered and doubled during Chicago's six-run second inning, and the Cubs beat the Seattle Mariners 11-0 on Wednesday for their 13th win in 17 games.

"He sets the pace pitching-wise," Chicago manager Joe Maddon said of Lester. "Offensively, we hit the ball hard. We hit it out of the ballpark. We played with a lot of energy again. I really appreciate the energy and enthusiasm in the dugout. It's outstanding."

The Cubs handed Seattle starter Marco Gonzales his first loss of the season, thanks to the big second inning when 12 batters came to the plate. Gonzales (5-1) failed to make it out of the inning after giving up five hits and walking two.

Báez led off the second with a homer to deep right-center field - his 10th of the season - and later added an RBI double just inside third base. Jason Heyward also had an RBI single, and both of Gonzales' walks came with the bases loaded.

Gonzales, who was trying to become the first six-game winner in baseball, was also hurt by an error from left fielder Domingo Santana, who dropped David Bote's liner. It was Santana's sixth error of the season, the most of any outfielder in the majors. Gonzales was only charged with three earned runs, but it was the shortest start of his career.

"I'm just a little off-rhythm," Gonzales said. "I'm having trouble finding the action that I needed on my pitches. Falling behind in counts, pitching through some traffic on the bases, and not controlling things I can control."

Lester (2-1) cruised after the early run support, allowing one hit in seven innings. Pitching in his home state for the first time since September 2014, Lester struck out eight and walked only one. Seattle's only hit off the left-hander was a looping single from Ryon Healy in the second inning. It was Lester's second start since a stint on the injured list with a hamstring injury and easily his most impressive outing of the season.

"I think we were able to just use that layoff almost to regroup a little bit physically on my shoulder and elbow. It was just a matter of making sure the leg was OK coming back," Lester said. "I felt like my arm was good, my mechanics were good and it just kind of carried over to the last few starts."

Lester has not allowed a run in his last two starts in Seattle - even though they were five years apart. He said pitching with late-afternoon shadows allowed him to use his cutter more against right-handed hitters.

Anthony Rizzo and Willson Contreras both homered in the fifth. Rizzo has 10 extra-base hits in his past 11 games, including homers in three of the past four.

Cubs: Kris Bryant was lifted for pinch-hitter David Descalso in the fifth inning. Bryant was the designated hitter for both games in Seattle.

Mariners: 3B Kyle Seager believes he will be able to come off the 60-day injured list when he is eligible in late May. Seager has been out all season after having hand surgery during spring training. He took light batting practice for the first time on Tuesday and was taking ground balls during pregame on Wednesday. Seattle manager Scott Servais said how Seager's hand responses to facing increased velocity at the plate will be important. Seager will have a minor-league rehab assignment before rejoining the club.

Seattle was outscored 52-26 on its six-game homestand and lost the last four games by 14, 13, one and 11 runs. According to STATS, Seattle is the first team to lose four straight games with three of them by more than 10 runs since the 1890 Philadelphia A's, an American Association team, in its final week of existence.

The Cubs had a special guest for batting practice before Wednesday's game: Pearl Jam's Eddie Vedder. The longtime Cubs fan and Seattle resident took a few hacks in the batting cage while chatting with manager Joe Maddon. Vedder watched both games of the series with former Chicago Blackhawks star Chris Chelios.

Cubs: After a day off, the Cubs return home to open a homestand against St. Louis with Kyle Hendricks (1-4) getting the start. Hendricks allowed seven runs on 10 hits against Arizona in his last start.

Mariners: Seattle opens a 10-game road trip on Friday in Cleveland with LHP Yusei Kikuchi (1-1) making his eighth start. Kikuchi pitched only one inning in his last start as Seattle tries to limit his innings for the season.