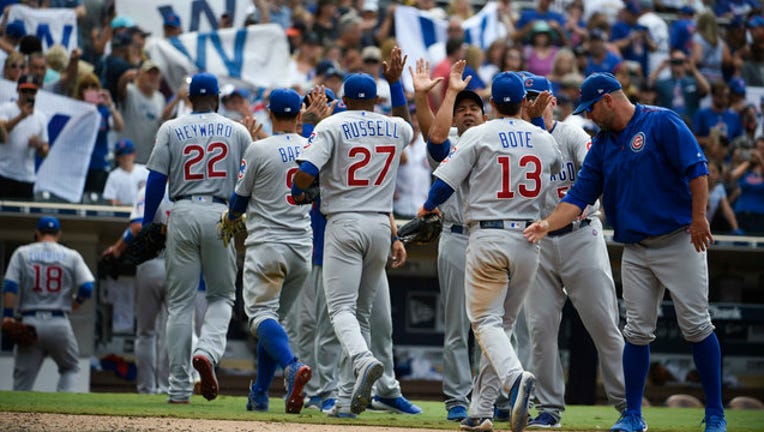 SAN DIEGO (AP) -- Jon Lester and the Chicago Cubs are on top of the National League at the All-Star break.

Lester won for the eighth time in nine starts, Jason Heyward drove in two runs and the Cubs beat the sloppy San Diego Padres 7-4 on Sunday for a three-game series sweep.

Chicago closed out a 4-2 West Coast trip. With All-Star second baseman Javier Baez putting together a big first half, the Cubs (55-38) lead the Milwaukee Brewers by 2 1/2 games in the NL Central.

"I feel like we've been playing really good baseball for a while and the Brewers have kind of matched us," Lester said. "We're able to kind of gain some ground this weekend on our end. I think the biggest thing is just keeping your head down and keep plodding ahead. You can't worry about other teams and what they're doing right now."

The Cubs won the World Series in 2016, stopping their 108-year title drought. They made it back to the NLCS last year before losing to the Los Angeles Dodgers, so they know how to approach the second half.

"We've got still a month and a half of baseball to kind of battle our way through and then obviously September is kind of the game-changer," Lester said. "We get through this next month and a half and get into September and put ourselves in a good potion, I feel pretty confident about it."

The Cubs jumped to a 5-0 lead after two innings against rookie left-hander Eric Lauer, who came within one out of his first complete game in a 4-1 victory over the Dodgers in his previous start.

It was more than enough for Lester (12-2), who struck out seven in 5 1/3 innings. The All-Star lefty allowed three runs and six hits while improving to 10-1 in his last 12 starts.

Lester was selected for Tuesday's showcase in Washington by the players' vote, but he won't be on the active roster due to Sunday's outing.

The 34-year-old Lester carried a 7-1 lead into the sixth inning before getting into a jam. He hit Freddy Galvis with the bases loaded, forcing in a run. James Norwood then came in and got Austin Hedges to pop out before walking pinch-hitter Carlos Asuaje, bringing home another run. Manuel Margot then flied out to right, ending the inning.

"There was a time that I thought he might go through seven but all of a sudden things began to unravel in the sixth and I had to get to it pretty quickly," manager Joe Maddon said. "But overall Jon had a nice day."

Lester said he's been fortunate in the first half.

"I've been on the good side of the baseball gods in the first half. I will definitely take that," he said. "I feel there's been some games I've thrown the ball really well and some games where I haven't and I still kind of had some good fortune along the way."

Pedro Strop surrendered Hunter Renfroe's seventh homer in the seventh, but Justin Wilson got three outs before Brandon Morrow pitched the ninth for his 22nd save.

Christian Villanueva also homered for San Diego, hitting his 19th of the season in the fourth. Villanueva had two hits and scored twice.

Lauer, meanwhile, was in trouble early and often. He faced seven batters and threw 37 pitches in the first inning, when Baez and Addison Russell hit RBI singles and Ben Zobrist drove in a run on a groundout. Heyward hit a two-run single in the second.

That was it for Lauer (5-6), who allowed five hits, struck out three and walked one.

The Cubs added an unearned run in the fourth, when the Padres committed three errors.

"There were some ugly moments. Some very ugly moments in the game today, and tough to stomach from a manager's perspective," San Diego's Andy Green said. "Stuff we can't do. Some fight at the end, yes."

Kris Bryant brought in a run in the sixth when he was hit by a pitch by Adam Cimber with the bases loaded.

"Frustrating," Green said. "Not where I thought we'd be. Not where I want to be. I take ownership of that. It's my team. It's our team. We expect to play better than we've played. I think everyone in the clubhouse expects to play better from a win-loss perspective."

The Cubs placed outfielder Albert Almora Jr. on the family medical emergency list and recalled infielder David Bote from Triple-A Iowa. Bote started at third base and went 1 for 2 with a walk.

Cubs: Kyle Hendricks (6-8, 3.92 ERA), who beat the Padres on Saturday night, is scheduled to start Thursday night as the Cubs open the second half against the St. Louis Cardinals.