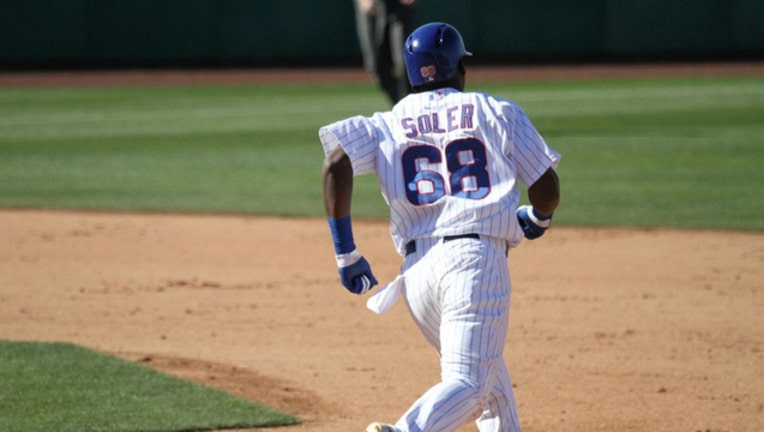 OXON HILL, Md. (AP) -- Wade Davis already had closed out a World Series. And that was part of his appeal for the Chicago Cubs.

In a trade between the last two champions, the Cubs acquired the All-Star reliever from the Kansas City Royals on Wednesday for outfielder Jorge Soler. Davis immediately takes over the spot held by Aroldis Chapman, who became a free agent after the Cubs won their first title since 1908.

Davis has done especially well in the postseason and helped the Royals win the 2015 crown. In 27 1/3 career postseason innings as a reliever, he has a 0.33 ERA with 39 strikeouts. The 31-year-old righty went 2-1 with 27 saves in 30 chances and a 1.87 ERA last season. He spent time on the disabled with a forearm injury and was limited to 43 1/3 innings, but returned to pitch in September.

Hoyer said Royals GM Dayton Moore allowed the Cubs' trainer to examine Davis earlier in the day, and the medical report was fine.

The 24-year-old Soler hit .238 with 12 home runs and 31 RBIs in 86 games last season. He missed almost two months because of a strained left hamstring.

For the Royals, the deal made financial sense as they try to cope with several star players eligible to leave after the 2017 season. Davis, who will make $10 million next year, was part of those looming free agents, along with outfielder Lorenzo Cain, first baseman Eric Hosmer, third baseman Mike Moustakas and pitcher Danny Duffy.

Starting next offseason, teams only receive a draft pick after the first round if a player signs with a new club for $50 million or more. Otherwise, it's a lower pick.

At 24, Soler is under contract control by the Royals for a while, "so this was important for us," Moore said.

Soler figures to play right field and can also serve as a designated hitter.

Davis joins a bullpen that includes Hector Rondon, Pedro Strop, Carl Edwards Jr. and more. For a team that expects to play "that seventh month," as Hoyer said, it helps to have extra arms.

Hoyer said the Cubs saw the physical toll it takes on pitchers to play until November. With Chicago well positioned to try to extend its run, Hoyer said, "we want to plan accordingly."

Chapman was traded from the New York Yankees to the Cubs late in the season.

"Having Wade there from Day One then makes everybody else a little bit better," Cubs manager Joe Maddon said. "And also, when you win games, when you win a lot of games, win a lot of games in row, that's where you have the tendency to beat somebody up. So by having this kind of depth, you don't have to put the burden on one or two guys."

"It's going to mean you can spread it out a little bit more. So having Wade there at end permits us to use these other guys differently and the ability to spread out the workload," he said.

The trade was announced at the winter meetings, where relievers have been a main focus. The San Francisco Giants gave closer Mark Melancon a $62 million, four-year deal while free agents Kenley Jansen and Chapman are still available.

"Like I said, Aroldis pretty much relies on his fastball. He's got a great slider. Whereas Wade, growing up a starter, pitches," he said.

Davis is a two-time All-Star who has dominated in recent seasons. Since the former Tampa Bay starter became a full-time reliever in 2014, Davis is 19-4 with 47 saves and 1.18 ERA.

Soler made his big league debut in 2014, and the Cuban is a career .258 hitter with 27 homers and 98 RBIs. He starred in the 2015 postseason when the Cubs reached the NL Championship Series, reaching base in his first nine playoff plate appearances and batting .474 with three homers and three doubles in seven games.

Soler went 2 for 13 in this year's postseason, with both hits coming against Cleveland in the World Series.