Darvish (6-3), pitching at Wrigley Field for the first time since the Cubs traded him to the Padres as the centerpiece of a seven-player trade on Dec. 29, 2020, didn’t allow a runner past second base after Yan Gomes hit a home run in the second.

Taylor Rogers pitched a perfect ninth inning for his 19th save.

The start of the game was delayed 1 hour, 25 minutes because of rain that included tornado sirens throughout the Chicagoland area.

Cubs left-hander Justin Steele received medical attention one batter after unsuccessfully trying to field a hard grounder by Jake Cronenworth with his bare hand in the first. Steele remained in the game, but the Cubs had two left-handed relievers warming in the bottom of the inning. 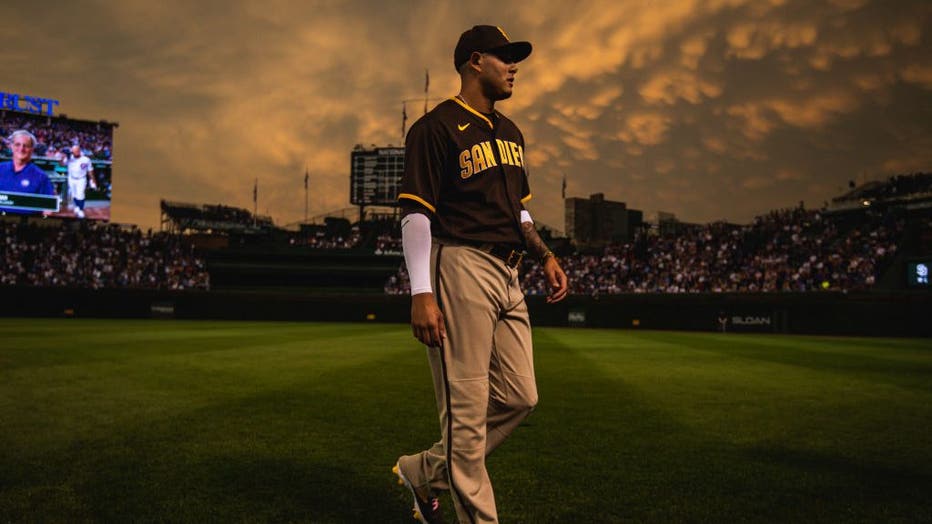 Manny Machado #13 of the San Diego Padres warms up in the outfield prior to the game against the Chicago Cubs on June 13, 2022 at Wrigley Field in Chicago, Illinois. (Photo by Matt Thomas/San Diego Padres/Getty Images)

Steele pitched seven innings of one-run ball while throwing 60 of 77 pitches for strikes.

"I don’t know what I was thinking," said Steele, who had a bruise on his left index finger. "But I was able to manage the pain a little bit going through the start."

However, the Padres pounced on reliever Rowan Wick (1-2), with Machado collecting his 1,499th career hit and scoring an insurance run on Hosmer’s double.

Steele found a similar groove, retiring nine of the next 10 batters after allowing consecutive singles to Kim and Trent Grisham to open the fifth.

Since allowing seven runs in two innings of a 20-5 loss at Cincinnati on May 26, Steele has posted a 2.84 ERA in his last three starts.

Darvish allowed a pair of two-out hits to Christopher Morel and Willson Contreras in the eighth but struck out Ian Happ to end the eighth and complete a 107-pitch performance, one shy of his season high. Darvish has allowed one run while walking none in his last two starts covering 14 innings.

"Happ is a pretty good with sliders, we wanted to stay away from that," Darvish said. "So the idea was to go with a four-seam fastball, mix in some slow curves and finish with a splitter. Basically, it went as planned."

With the victory, Darvish has beaten every team but the Orioles (0-1) and Rangers (no decision in one start).

"He’s really a magician with the ball," Padres acting manager Ryan Flaherty said. "He can get himself back into any count. And he falls behind 2-1, 3-1, and he can get himself back. It just makes it harder on a hitter because even when you get the count in your favor, you can’t sit dead red on the fastball."

Padres player development consultant Mike Shildt, who managed the Cardinals for 3 1/2 seasons (2018-2021), joined the coaching staff to assist acting manager Ryan Flaherty. "You can’t say enough about what (Shildt) means to me," said Flaherty, who is filling in as manager while Bob Melvin and bench coach Ryan Christenson remain in COVID-19 protocols.

The Cubs haven’t named a starter for Wednesday, but top prospect Caleb Kilian remains a possibility as long as the Cubs put a pitcher on the injured list. Kilian was optioned by the Cubs on June 5 and last pitched for Triple-A Iowa on July 10.

Padres: LHP Sean Manaea (3-3, 3.52) will face the Cubs on Tuesday at Wrigley Field. Manaea allowed two runs in seven innings in a 13-2 win over the Mets on Wednesday.

Cubs: RHP Kyle Hendricks (2-5, 5.22) will oppose the Padres on Tuesday. Hendricks allowed three runs in five innings in the Cubs’ 4-3 win over the Brewers on June 1. Hendricks has been dealing with an achy shoulder.