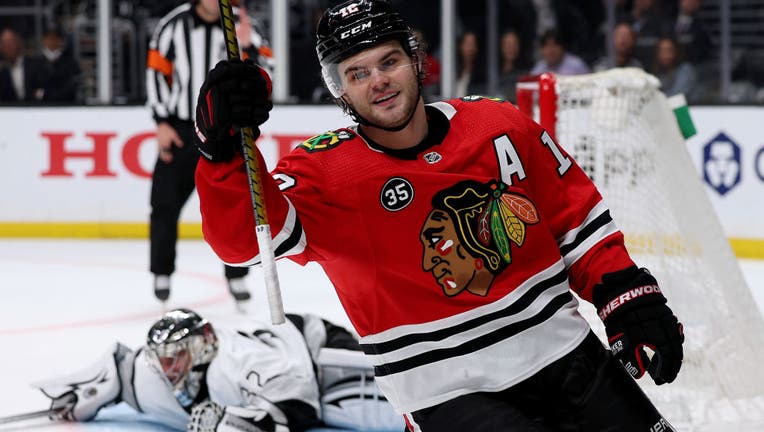 Alex DeBrincat #12 of the Chicago Blackhawks celebrates his goal past Jonathan Quick #32 of the Los Angeles Kings, to clinch a 4-3 win in an overtime shootout at Crypto.com Arena on March 24, 2022 in Los Angeles, California. (Photo by Harry How/Getty

Thursday night, Delia picked up the biggest win of his fledgling NHL career and outdueled Quick.

Delia made 43 saves and stopped all three of Los Angeles’ attempts in the shootout to give the Chicago Blackhawks a 4-3 victory.

"It’s hard to put into words. It’s really cool," said Delia, a Rancho Cucamonga native. "To be from this area, growing up watching Kings and Ducks, especially Jonathan Quick and, you know, get to compete with some really good company and come out victorious, it’s definitely a memorable experience."

Alex DeBrincat had a goal and an assist in regulation and then had the only score in the shootout for the Blackhawks, who have won two straight for the first time since getting four consecutive victories in the middle of January.

Delia made only his third NHL appearance this season. The 27-year old goalie began the season with Rockford of the AHL before being called up two months into the season. With Chicago playing on back-to-back nights, Delia found out before Wednesday’s game in Anaheim that he was going to get the start.

"He’s gone through a lot. Just nice for him, a California boy won in California in front of his family. Awesome," coach Derek King said. "He stood in there and also did a great job in the shootout."

Delia will be seeing more action over the final month of the season. He is the Blackhawks’ backup goaltender after Marc Andre-Fleury was traded to Minnesota and Kevin Lankinen assumed No. 1 duties.

Patrick Kane also had a goal and an assist for the Blackhawks. Sam Lafferty also scored.

"As a team, we’re trying to form this identity of how we want to play and how we want to be moving forward. So I think these past few games we’ve been pretty good," DeBrincat said. "It’s nice to win some games again, and hopefully we can keep going."

Phillip Danault scored twice for the Kings for his fourth multigoal game of the season. Quick made 28 saves.

Trevor Moore added a short-handed score for Los Angeles. He’s the first Kings player since Mike Richards in 2011 to have a short-handed goal in two straight games.

"We had a strong start. And we got down a little bit, and then we pick it up and we came back in the third, and that was a huge point. Obviously, we didn’t get the finish we wanted," said Danault, who has a career-high 21 goals on the season.

Kane, who has four straight games with a point, has 23 in March (five goals, 18 assists). That’s second to Nashville’s Roman Josi, who has 26 points this month. Kane was in position after DeBrincat’s shot took a big bounce off the endboards and put it past Quick at 16:44 of the first period.

Shortly after Los Angeles’ Troy Stecher was sent to the penalty box for hooking, the Kings evened it on Moore’s breakaway short-hander 2:13 into the second. Moore has 13 goals this season, but four are short-handed — which ties him with Columbus’ Gustav Nyquist, Florida’s Aleksander Barkov, Ottawa’s Alex Formenton and Anaheim’s Isac Lundestrom for the league lead.

DeBrincat scored his team-leading 36th of the season nine minutes later on a one-timer after a feed from behind the net by Dylan Strome.

Both of Danault’s goals were rebounds in front of the net. His first score at 16:50 of the second period gave him his third goal in the last four games and tied it at 2.

After Lafferty’s backhander in front of the crease put the Blackhawks back on top with 1:51 remaining in the second, Danault would tie it again at 9:07 of the third when he was able to fight through traffic and knock it in.

With the Kings still missing seven key players due to injuries, coach Todd McLellan thought this was the first time there were major breakdowns in communication. Despite being short-handed, Los Angeles is in second place in the Pacific Division by two points over Edmonton.

Blackhawks: Conclude their three-game road trip against the Vegas Golden Knights on Saturday.