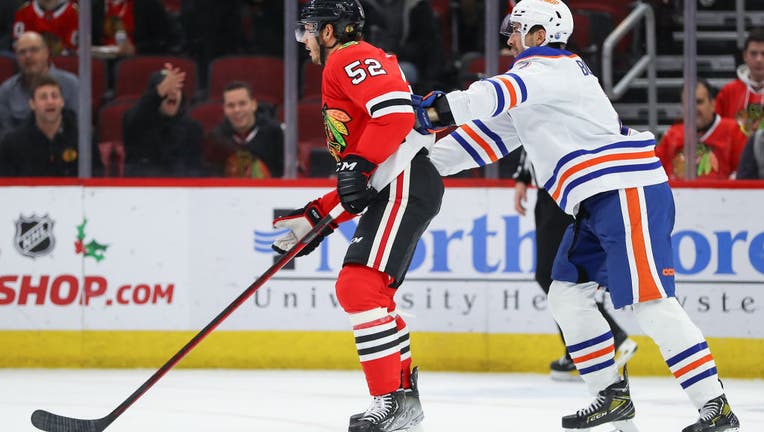 CHICAGO - Leon Draisaitl had two goals and an assist, helping the Edmonton Oilers top the slumping Chicago Blackhawks 5-4 on Wednesday night for their third straight win.

Connor McDavid, Ryan Nugent-Hopkins and Mattias Janmark each had a goal and an assist as Edmonton improved to 2-0 in Chicago this season. Brett Kulak had two assists, and Stuart Skinner made 21 saves.

"Just got to keep building and we can't be satisfied with three wins in a row and the record we have," Janmark said. "We've just got to keep moving forward here."

The Blackhawks lost their eighth consecutive game and dropped to 2-10-4 in their last 16 overall. Max Domi had two goals, and MacKenzie Entwistle and Boris Katchouk also scored.

"It is good to see that we do fight back right to the end," first-year Blackhawks coach Luke Richardson said. "But we have to be more stingy defensively without taking away from our offense."

McDavid got Edmonton some breathing room when he skated past Chicago defenseman Jack Johnson at the blue line and beat Arvid Soderblom on the goaltender's stick side, making it 3-1 with his team-best 18th goal 1:18 into the third period.

After Janmark finished a 2-on-1 with Nugent-Hopkins midway through the third, Domi and Entwistle scored 19 seconds apart to get Chicago (6-12-4) back in the game.

But Edmonton's two biggest stars went right back to work. McDavid set up Draisaitl's 15th goal on a one-timer with 4:39 left.

Chicago made one last push, closing to 5-4 on Domi's second power-play goal with 1:11 left. But the Blackhawks couldn't come up with the tying score in the final moments.

"It was a little scrambled in the end, but we won," Oilers forward Jesse Puljujarvi said. "That's the really important thing."

Edmonton (13-10-0), which plays again Thursday night at Minnesota, jumped in front with two goals in the second.

Skating in his 500th NHL game, Oilers defenseman Darnell Nurse found Draisaitl at the side of the net for an easy tap-in goal 54 seconds into the period.

A streaking Nugent-Hopkins made it 2-0 at 9:48 with his 10th goal, converting a nice feed by Puljujarvi from behind the net.

Edmonton also had a goal overturned in the first because of goaltender interference on Zach Hyman, who scored after he pushed Chicago defenseman Seth Jones into Soderblom. Hyman sent a shot off the inside of the post in the opening period.

Chicago got one back when Johnson's long shot went off Katchouk and into the net 14:33 into the second. It was Katchouk's first point in his 12th game of the season.

Blackhawks defenseman Jarred Tinordi (hip) and forward Sam Lafferty (back) were scratched because of injuries. ... Oilers forward Tyler Benson made his season debut. He had been sidelined by a knee injury.

Oilers: At the Minnesota Wild on Thursday night.

Blackhawks: At the New York Rangers on Saturday night.