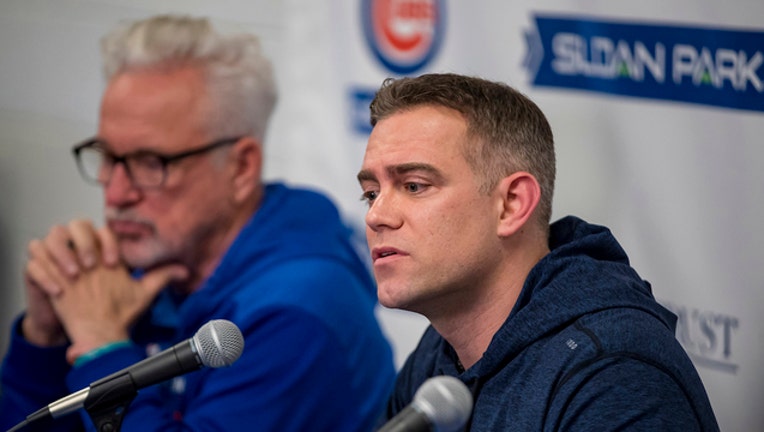 The way Epstein sees it, there's blame to go around.

"I see us as in it together," Epstein said. "My job is to put him in a position to succeed. I like nothing more as an executive than sitting back - the team's playing well, the manager's on a roll, you guys are all talking about this is the best job he's ever done. That makes me feel good. Now, the team's struggling so there's going to be speculation in the other direction."

The Cubs entered Saturday's game against the crosstown White Sox trailing NL Central leader Milwaukee by a half-game at 46-42. They were coming off an 11-3 romp at Pittsburgh on Thursday, but the Cubs have been in a funk for weeks, struggling at the plate and making mistakes in the field and on the bases.

"The sloppiness has kind of surprised all of us," Epstein said.

Maddon led the Cubs to the playoffs in each of his first four seasons, including a World Series championship in 2016 that ended a 108-year drought. But with an early exit last year after struggling down the stretch and a contract that expires after this season, there are questions about his future.

"We're in this together," Epstein said. "Look, Joe's been remarkably effective and remarkably consistent. I'm not going to sit here and say this is on him. My job is to put him in a position to succeed. And when we're not succeeding, you can't point at any one thing."

Epstein said the Cubs are "not close" to making any trades. How the team performs over the next few weeks will go a long way toward determining the types of moves Chicago tries to make prior to the July 31 deadline.

"I think we all feel fortunate to be within half a game of first place, giving the way that we've played," Epstein said. "If the (division) had shaken out a little bit differently, we'd be in a lot different mindset - probably looking more longer term. Right now, we're looking very short term. We're looking at how to claw back to first place and then build a lead."

Epstein said he expects veteran Ben Zobrist to rejoin the team this season, though there is no set date. The 38-year-old Zobrist is going through a divorce and has been on the restricted list since May 8.