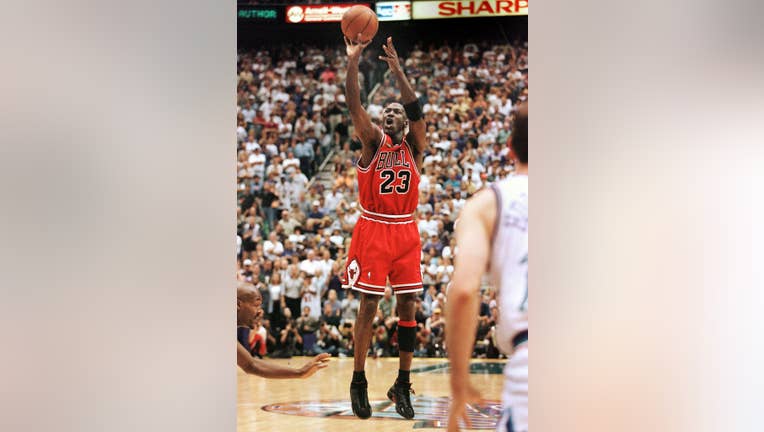 With 5.2 seconds left in the game Michael Jordan of the Chicago Bulls (C) aims and shoots the game-winning jump shot as Bryon Russell of the Utah Jazz (L) drives at Jordan's feet 14 June during game six of the NBA Finals with the Utah Jazz at the Del (JEFF HAYNES/AFP via Getty Images)

The final episodes of “The Last Dance” have aired, yet ESPN has one more program to show about the Chicago Bulls’ sixth championship.

ESPN will show “Game 6: The Movie” on Wednesday night at 9 p.m. EDT, following a rebroadcast of episodes nine and 10 of “The Last Dance.” The episode will feature game footage captured by five NBA Entertainment cameras and marks the first time that the game has been available to watch in high-definition.

The Bulls defeated the Utah Jazz 87–86 as Michael Jordan hit the game-winning basket with 5.2 seconds remaining to cap their sixth championship in eight seasons.

Executive Producer Gregg Winik — who had the same title for NBA Entertainment during that Bulls championship season — said the brainstorming about Game 6 started by compiling the last 40 seconds of the game for the final episode of “The Last Dance”. After they were able to do that, it started to expand into a project of its own. Winik and his team then took the NBC telecast and started to lay in footage to get the complete product.

“If you would have told me six months ago if we could have done this, I would have said it was impossible,” Winik said. “It features a lot of dramatic imagery and the pictures jump off the screen.”

High definition was still in its infancy in 1998. In fact, the first major sports event to be broadcast in high definition didn’t happen until Super Bowl 34 in January 2000.

Connor Schell, ESPN’s executive vice president for content, said there were conversations about showing the original NBC broadcast, until discussions revolved around an enhanced presentation.

“It was timed out beautifully and how quick we were able to get it on the air,” Schell said. “To top off this project with this never-seen-before version of Game 6 is an incredible ending.”

ESPN and Nielsen said that the final two episodes of ’The Last Dance” on Sunday averaged 5.6 million viewers.