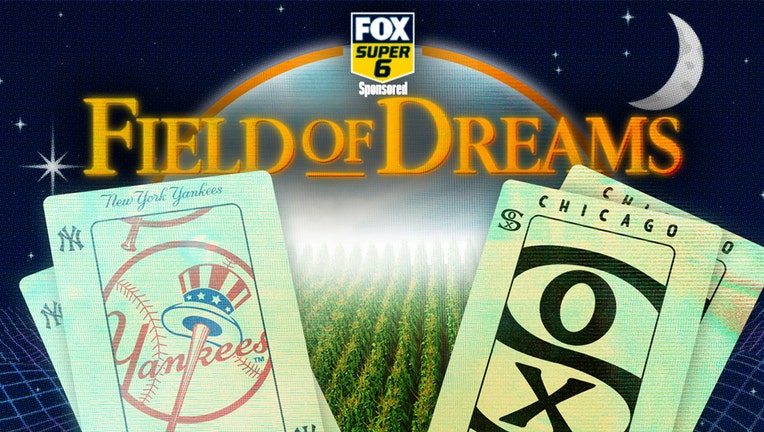 In one of the most powerful moments of the 1989 film "Field of Dreams," Terrence Mann – the character played by James Earl Jones – tells Ray Kinsella (Kevin Costner) about the enduring legacy of baseball.

"They'll watch the game, and it'll be as if they dipped themselves in magic waters," Mann said. "The memories will be so thick they'll have to brush them away from their faces. People will come, Ray. The one constant through all the years, Ray, has been baseball."

It has been 32 years since the iconic ballpark in an Iowa cornfield from Field of Dreams became a part of American life. On Thursday night (6 p.m. ET, FOX), Major League Baseball will turn the Hawkeye State into Baseball Heaven with a game between the New York Yankees and Chicago White Sox at an 8,000-seat stadium custom-built next to the movie landmark.

The Field of Dreams game is a celebration of the game that happens to include two of the sport’s hottest teams. The Yankees are right back in the American League East and Wild Card races following a post-trade deadline surge, thanks to Aaron Judge and company. The White Sox are running away with the AL Central, aiming for home-field advantage throughout the playoffs and now have Eloy Jimenez back to help assist an already potent attack.

And as you are watching the Field of Dreams game on FOX Thursday night, you can win big yourself for free with FOX Super 6. Just answer correctly six questions about how the game will play out, and you could win $10,000 of David Ortiz's money.

It’s free and easy to play – just download the FOX Super 6 app from your phone or tablet device, make your picks and tune in!

Here are the questions for Thursday night’s game, with a little insight to help in your selections.

How many total Home Runs will be hit?

The dimensions in the custom stadium are nothing out of the ordinary – 335 feet down the lines, 380 to the gaps, 400 to dead center. The one wild card in this is there’s no "superstructure" like a normal stadium to either knock a ball down to keep it in the park or give it an artificial jet stream to fly out on.

In that sense, this could be similar to a spring training game – and the ball tends to fly in spring training stadiums. Plus, both lineups can hit and the weather forecast for Thursday evening in Iowa calls for temperatures in the high 90s. Usually, that means "hitting weather."

How many total runs will be scored?

The White Sox lineup has been depleted by injuries for a lot of the season, but Chicago still has posted roughly five runs a game. The Yankees have been majorly inconsistent, but have shown the ability recently to produce big offensive games during this run back into contention.

This number could go high – and keep in mind, at FOX Bet, most MLB game total scores over/under tend to be at least 8 runs, if not 9 or 10.

How many total strikeouts will be thrown?

The White Sox pitching staff entered Tuesday with the most combined strikeouts thrown by any team in the majors at 1,120 – one more than the Dodgers and Brewers. The Yankees pitching staff has thrown the second-most behind Chicago in the American League entering Tuesday’s action.  Both teams' lineups are also in the upper half of the sport when it comes to whiffs committed. There are also unfamiliar surroundings and the temptation to hit it to the corn.

In other words – think a big number.

Who will have the winning pitcher and how many innings will he pitch?

The options: Yankees or White Sox, with assorted ranges from 1/3 of an inning to 6+ innings

Both teams tend to use their bullpens effectively, and in competitive games like this, it isn’t uncommon to see starters get pulled fairly early.

So a reliever throwing toward the lower end of the scale is a good bet here.

Which team will score more runs and how many will they score?

The options: Yankees or White Sox, with ranges from 1 to 9+ runs

It would feel like a safe bet that this game could end up being one of those where the winning run total could break into double figures. The White Sox may have the upper hand in the sense that Carlos Rodon is a far more established starter and could do a better job keeping the Yankee bats in check early.

Which team will win and by how many runs?

The options: Yankees or White Sox, with ranges from 1 to 9+ runs

Forget the special nature of the location for one second – although it certainly is hard to do given how incredible the visual will be. This is a crucial game for two teams that have legitimate World Series aspirations.

It also could be a potential Division Series matchup should the Yankees get the Wild Card. This is also the young White Sox’s first really major national exposure, and they could thrive in it.

All in all? It should be fun.

Play the FOX Super 6 Field of Dreams game for your chance to win $10,000 of David Ortiz's money! Just download the FOX Super 6 app on your phone or mobile device, make your picks for Thursday's game then tune in and check out the action.