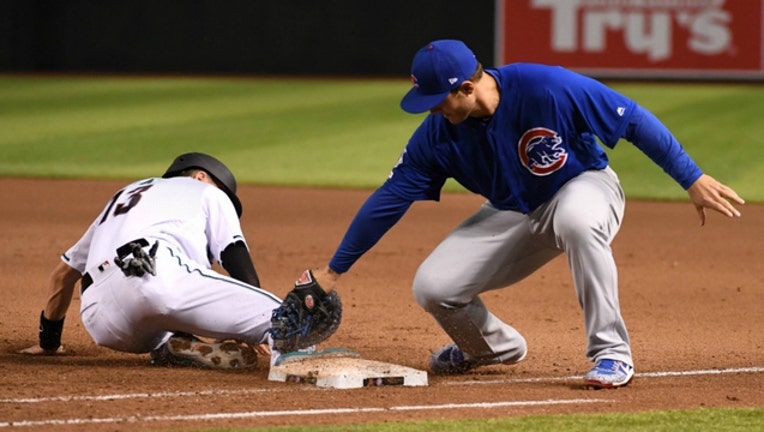 PHOENIX (AP) - The Arizona Diamondbacks are rolling along quite nicely.

"Once we were aggressive, we just put the ball in play and found some holes," Jones said. "We've just been grinding. Passing the baton and trying to have good at-bats. It's just a matter of playing together and pushing the guy in front of you."

Kris Bryant and Javier Baez homered for Chicago, and Albert Almora Jr. matched a career-high with four hits. But the Cubs were unable to overcome another shaky performance by Kyle Hendricks, who was coming off his best start of the season.

The Diamondbacks jumped on Hendricks (1-4) for three runs in the first. Jones singled in Ketel Marte, and Flores drove in two more when he rolled a single through the right side with two out.

Bryant responded with a two-run shot in the third for his first homer since opening day. Bryant's two-out drive left the park in a hurry, hitting a digital sign board in left-center on the fly.

Baez's team-leading ninth homer trimmed Arizona's lead to 4-3 in the fourth. But the Diamondbacks broke it open in the fifth on Flores' RBI single and Ahmed's first triple of the season.

"That was the big thing. Two outs, nobody on, three runs in that fifth. That hurt," Cubs manager Joe Maddon said. "That falls under the category of that's baseball, especially in a place like this. It is kind of a 'Coors (Field) light.'"

Six of Arizona's runs came with two out.

"We've got some really hot guys right now," Ray said of his run support. "It's fun to watch."

Hendricks (1-4) was charged with seven runs and 10 hits in five innings. The righty struck out 11 in seven scoreless innings in his previous start against the Diamondbacks on April 19.

Hendricks has pitched more than five innings only once in five starts this season.

"Guys were making good plays behind me. We were battling back," Hendricks said. "I just couldn't go out and get a shutdown inning. Not good overall. I didn't give us a chance to win at all."

David Peralta had two hits for Arizona, including his 13th double. Peralta passed Paul Goldschmidt in 2014 for the most doubles in franchise history in the opening month of the season.

The Cubs promoted right-hander Dillon Maples from Triple-A Iowa. Maples takes the roster spot of left-hander Randy Rosario, who was sent down after Thursday's game.

Maples worked one inning against the Diamondbacks, walking the first two batters before striking out the side.

Maddon said his Chicago restaurant, Maddon's Post, will open on May 14. The Wrigleyville restaurant will serve Polish and Italian cuisine.

Cubs: LHP Mike Montgomery (back injury) is scheduled for a rehab start for Iowa on Saturday.

Cubs: RHP Yu Darvish (1-3, 5.96 ERA) gets the ball on Saturday for his sixth start of the season. He pitched five innings of three-run ball in a 6-0 loss to the Diamondbacks in his previous start last Saturday.