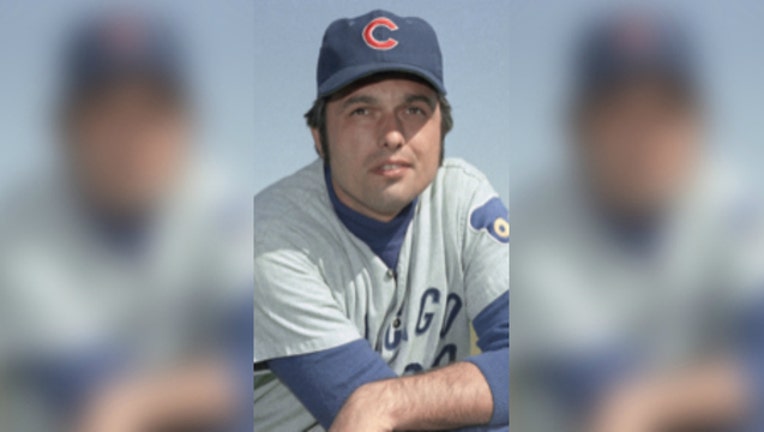 CHICAGO (AP) - Milt Pappas, who came within a disputed pitch of throwing a perfect game for the Chicago Cubs in 1972 and was part of the lopsided trade that brought Frank Robinson to Baltimore, died Tuesday. He was 76.

Pappas died of natural causes at his home in the northern Illinois community of Beecher, said his widow, Judi Pappas.

The 6-foot-3 right-hander won 209 games during his 17-year career with the Orioles, Cincinnati Reds, Atlanta Braves and Cubs, finishing with a career ERA of 3.40 to go along with 1,728 strikeouts and 43 shutouts. He also hit 20 home runs.

Pappas was a teenager when he joined the Orioles in 1957 and he started quickly.

"He spent two weeks in the minors and then he was in the major leagues pitching to Ted Williams and Mickey Mantle," Judi Pappas said.

Pappas won at least 10 games every year he was in Baltimore and was part of the Baby Birds staff in 1964, a young rotation with great promise. He was an All-Star by 1962 and started the Midsummer Classic in 1965, months before he and two other players were dealt to Cincinnati for Robinson, the future Hall of Famer who won the Triple Crown and was the World Series MVP in his first season with the Orioles.

Pappas was sent to Atlanta two years later, where he pitched 2 1/3 innings of relief and gave up three runs in the 1969 NL Championship Series against the Mets, and then to Chicago in 1970.

Twice in the next four seasons he won 17 games with the Cubs, including 1972 when he went 17-7 and came within one pitch of throwing a perfect game. Instead he walked San Diego's Larry Stahl with two outs in the ninth and finished with a no-hitter. He disputed the calls by umpire Bruce Froemming for years and his widow said he forever insisted he had thrown a strike.

Pappas's name was in the news a number of times after he retired before the 1974 season. In 1987, the body of his then-wife, Carole, who disappeared five years earlier, was found in a vehicle in a pond in suburban Chicago. The coroner determined there was no sign of foul play and the Wheaton police chief said it appeared she was on her way home and accidentally drove into the pond.

Last year, Jake Arrieta won his eighth straight start to become the first Cubs pitcher to win that many consecutive games since Pappas won 11 in 1972.

"Milt will forever be remembered for one of the most dramatic pitching performances in team history as he delivered a no-hitter that neared perfection in 1972," Ricketts said. "We will always consider him part of the Chicago Cubs family."

Though Pappas spent nearly half his career in Baltimore and just four seasons in Chicago, Judi Pappas said he always considered himself a Cub.

"He was first and foremost a Cub, absolutely," she said.