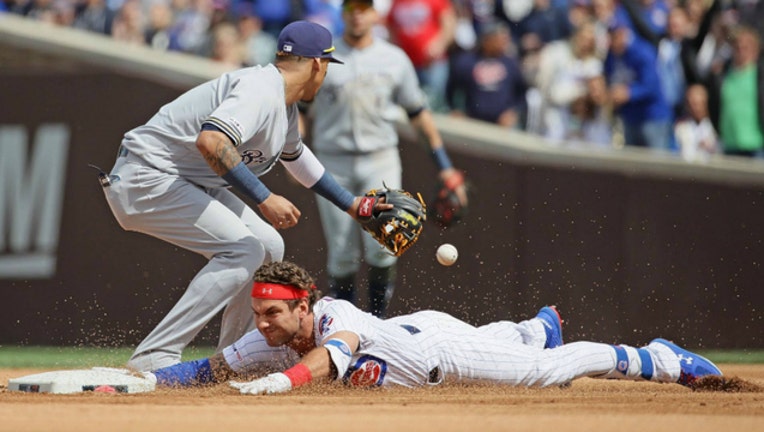 CHICAGO (AP) - Gio González is quite comfortable with the Milwaukee Brewers.

After a strange start to the season, that's a big deal for the veteran left-hander.

"We pitched really good again," manager Craig Counsell said. "Our guys did a great job, and it started with Gio."

González finished last year with Milwaukee, helping the Brewers make it to the NL Championship Series. But he was a free agent up until he signed a minor league contract with the Yankees in March.

After opting out of his deal with New York, he returned to a Milwaukee team in need of some rotation help. It's worked out quite well so far, with González (1-0) recording a 1.69 ERA over his first three starts.

"I'm just happy to put on a big league uniform," González said, "and I'm happy to do it with the Brewers. They've been great to me."

Yasmani Grandal and Jesús Aguilar each drove in two runs for Milwaukee, which moved into a virtual tie with Chicago for the NL Central lead. Hernán Pérez also contributed with a couple of nice plays at second base.

The Brewers (24-16) moved a season-high eight games over .500 in their first visit to Wrigley Field since they topped the Cubs 3-1 in the division tiebreaker game Oct. 1.

"It was just a bit off for the offense today in terms of finishing it off," Cubs third baseman David Bote said.

Braun put Milwaukee ahead to stay with his eighth homer with two out in the fourth. Quintana had retired 10 in a row before Braun drove a 1-0 pitch over the wall in center, answering the usual round of boos that chase the 2011 NL MVP whenever he visits Wrigley.

It was Braun's 38th homer against Chicago, his second-highest total against a single team. He has connected in each of his three games against the Cubs this year.

"Wrigley is always such a special place to play," Braun said. "It's loud. It's always packed. It's energetic. You play in some of these ballparks now with the teams that aren't competing, and it can be really empty at times. It's not an enjoyable atmosphere to play in as a competitor. This place is always special. It's always fun."

Milwaukee added two more in each of the final three innings. Grandal singled in Orlando Arcia and Aguilar walked with the bases loaded in the ninth.

González struck out three and walked three in 5 2/3 innings. He got some help in the third when Pérez robbed Albert Almora Jr. of a potential run-scoring single with a diving play on a grounder up the middle.

"He kept us off balance, made pitches," Cubs manager Joe Maddon said. "We made a couple of well-contacted balls but for the most part, not."

Chicago hurt itself with a couple of fielding miscues. Grandal slid home safely when first baseman Anthony Rizzo made an ill-advised throw to the plate after making a diving stop on Mike Moustakas' grounder in the seventh. Catcher Willson Contreras had a costly throwing error in the eighth.

Brewers: CF Lorenzo Cain was shaken up after he fouled a ball off his lower left leg in the sixth inning, but he stayed in the game. ... RHP Chase Anderson (right middle finger laceration) was scheduled to throw a bullpen session Friday. He is expected to make at least one rehab start before returning to the Brewers.

Cubs: INF Daniel Descalso (sore left ankle) could return to the starting lineup this weekend. Descalso has been limited to pinch hitting since he got hurt last Saturday. "He's doing well," Maddon said. "He's making a lot of progress."

Brewers right-hander Zach Davies and Cubs left-hander Cole Hamels get the ball on Saturday. Davies (4-0, 1.56 ERA) pitched into the eighth inning in a 3-2 victory over the New York Mets on Sunday. Hamels (3-0, 3.38 ERA) is coming off three consecutive no-decisions.