CHICAGO - Brian Goodwin homered with one out in the bottom of the ninth inning to give the Chicago White Sox a 2-1 victory over the Cleveland Indians on Sunday.

Goodwin hit a 3-1 pitch from Nick Wittgren (2-4) over the wall in right for his sixth home run of the season.

Liam Hendriks (5-2) allowed just one hit in the ninth to complete a scoreless six-inning stint by the Chicago bullpen. Reynaldo Lopez allowed one hit in three innings followed by Aaron Bummer and Craig Kimbrel, who each worked a hitless inning.

Chicago won two of three in the series to extend its AL Central lead to nine games.

Myles Straw homered for the Indians.

A day after he became the first major league player to hit his first three homers in a game, White Sox rookie catcher Seby Zavala was hitless in two at-bats and also walked. 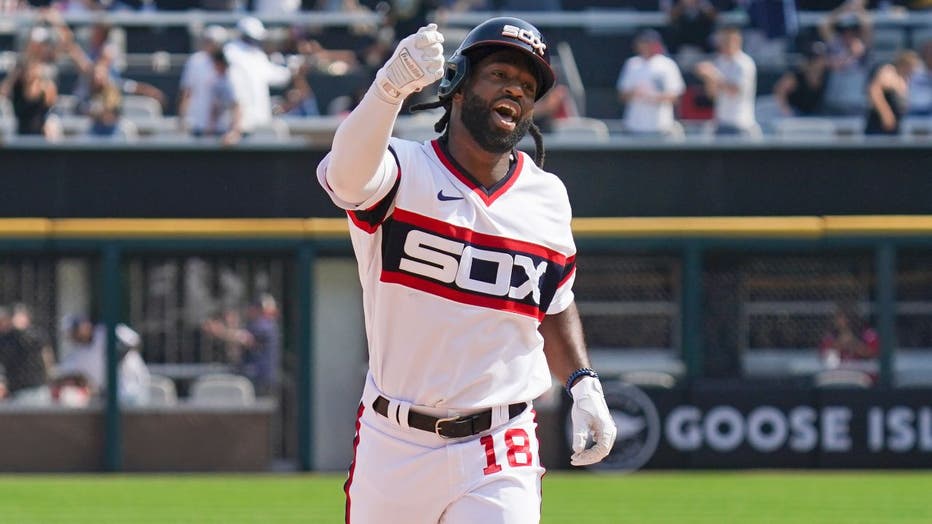 Brian Goodwin of the Chicago White Sox celebrates his walk-off home run during the ninth inning of a game against the Cleveland Indians at Guaranteed Rate Field on August 01, 2021 in Chicago, Illinois. The White Sox defeated the Indians 2-1. (Nuccio DiNuzzo/Getty Images / Getty Images)

Cleveland jumped out to a 1-0 lead on Straw’s fourth homer of the season leading off the third.

Chicago tied it in the fifth when José Abreu — who was hit in the head with a 96-mph fastball on Friday — was hit by a Cal Quantrill pitch with the bases loaded. The up-and-inside pitch grazed off Abreu’s left arm just below the shoulder. He stood at home plate for a moment before slowing making his way to first base.

Quantrill gave up one unearned run on three hits and four walks over six innings. He struck out six.

After consulting with the Elias Sports Bureau, the Indians announced they are freezing Terry Francona’s managerial record at 723-568, which was through Wednesday’s game.

Francona is on medical leave for the remainder of the season and has been replaced by DeMarlo Hale. If Francona returns next season, he will get credit for the team’s record the rest of the way. If he doesn’t return, those games go on Hale’s record.

Francona is just five wins away from matching Lou Boudreau for most in franchise history.

Indians: RHP Shane Bieber (shoulder strain) is expected to begin playing catch again Monday in Toronto. Bieber had been limited to throwing weighted balls for a few days after he had started to play catch over a week ago.

White Sox: OF Billy Hamilton was placed on the 10-day injured list prior to the game with a right oblique strain. It’s the second time this season Hamilton has been on the IL with the oblique issue. "He’s so active, once in a while he tweaks it," manager Tony La Russa said. "I don’t think it’s anything that’ll keep him out very long." ... LF Eloy Jiménez (groin tightness) hit in the batting cage and did some running drills on Sunday. There’s a chance he’ll return to the lineup on Tuesday after missing the last four games.