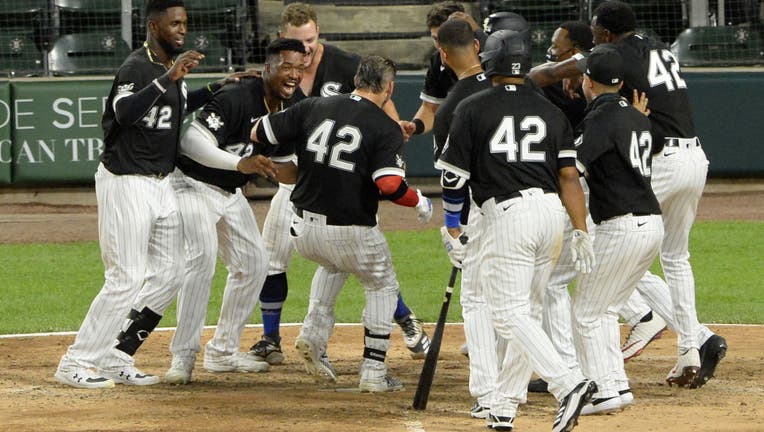 CHICAGO - AUGUST 28: Yasmani Grandal #42 of the Chicago White Sox is mobbed by teammates at home plate after hitting a walk-off home run in the bottom of the ninth inning against Ian Kennedy #42 of the Kansas City Royals on August 28, 2020 at Guarant

CHICAGO - Yasmani Grandal hit his third career game-ending home run in the ninth after a defensive miscue as the Chicago White Sox beat the Kansas City Royals 6-5 on Friday night.

Yoan Moncada had an RBI single in the seventh, Eloy Jimenez added a two-run homer and Luis Robert also homered for the White Sox who have won 10 of their last 11 games and eight straight at home.

Trailing 5-4 in the ninth, Ryan O’Hearn drew a one-out walk off White Sox closer Alex Colome. Maikel Franco followed with a liner to left-center. The White Sox caught Franco in between first and second. First baseman Jose Abreu tried to run him down but Franco got to second base before Abreu’s diving attempt of a tag. While Abreu was sitting on the ground near second base, Abreu threw to the plate. Grandal wasn’t looking for the throw and the ball got by Grandal, allowing pinch-runner Bubba Starling to score to tie the score.

“A very bizarre play. As I am thinking, it’s a dead ball as soon as Abreu falls on the ground. I am looking at the runner at third and he is standing at third, he’s not going anywhere,” Grandal said. “Right after that, I have to figure out if the dugout wants to challenge or not and let the umpire know we’re trying to challenge the play. As that happens, I turn around and see the ball going through my legs. Like I said before, it’s something to learn from, make sure I am aware as to when the play is over and when the umpire is actually calling timeout.”

Grandal made up for everything when he broke a 5-5 tie with a leadoff homer off Ian Kennedy (0-2) in the bottom of the inning.

“I’ve caught Kennedy before and I had plenty of AB’s against him. I kind of had a pretty good idea of what I wanted off of him in order to take a good swing at it,” said Grandal.

Colome (1-0) finished the game by getting the final four outs after blowing his first save attempt.

The White Sox moved into a tie with the Twins for first place in the AL Central.

Jorge Soler hit a two-run home run and Whit Merrifield added a solo shot for the Royals, who have lost all four of their games to the White Sox this season.

“We fought so hard to get back, every time in that game, multiple times. ... That’s one of the worst feelings as a reliever, getting walked off,” said Kennedy.

Royals manager Mike Matheny wants to see his team take advantage of situations when opponents give them a break.

“For our team to take that next step, we have to be relentless in those situations,” Matheny said. “We can’t let teams off the hook as often as we have. We’re facing major league-caliber pitching. I get it. It’s just that it’s going to continue to be the conversation. They’re going to get sick and tired of hearing about it, but it’s too big of a piece of the puzzle for us, to not make a mark early, to not figure out how to get it done late.”

Royals reliever Tyler Zuber, activated from the bereavement list before the game, walked Jimenez to start the seventh on four straight pitches. He gave up a single to Grandal, One out later, he was relieved by Scott Barlow, who walked Edwin Encarnacion to load the bases. After Franco was unable to make a running overhead catch in foul territory, Moncada ripped a single to right to put the White Sox ahead 5-4. Barlow escaped further damage by getting Robert to line out and Danny Mendick swinging.

Trailing 2-1 in the fifth inning with two outs, Tim Anderson hit a liner off the right thigh of Royals starter Danny Duffy. Duffy didn’t appear hurt despite getting a visit from the team trainer. Two pitches later, Jimenez teed off on a fastball, driving it deep into the ivy in center-field to give the White Sox a 3-2 lead. It was Jimenez’s 11th of the season and it measured at 452-feet.

Moncada chased Duffy with a two-out single in the sixth inning. Robert reached on a single off Royals reliever Jesse Hahn and Mendick struck out but reached on a passed ball by catcher Cam Gallagher to load the bases. Pinch-hitter Nomar Mazara added another run by drawing a bases-loaded walk to extend the lead.

The White Sox lead was short-lived. Reliever Matt Foster allowed a one-out walk in the seventh, then Soler followed with a two-run shot on an 0-2 pitch to tie the game at four it was his eighth of the season.

With two outs in the second, Robert hit an opposite-field home run into the Royals’ right-field bullpen. It was the rookie’s 8th of the season.

Merrifield tied the game in the third with a leadoff shot on a high 2-1 fastball. It was his sixth of the season. White Sox starter Reynaldo Lopez then surrendered three consecutive hits. Ryan O’Hearn hit an RBI single to put the Royals ahead 2-1.

Lopez was pitching in and out of trouble all night. Lopez allowed two runs on six hits in four innings. He struck out four and walked two.

Before the game, the White Sox acquired speedy outfielder Jarrod Dyson in a trade with Pittsburgh to boast their depth as they make a run for the postseason. Dyson came in as a defensive replacement in the ninth for Jimenez in left.

Duffy allowed four runs, three earned on seven hits. He struck out six and walked one in the no-decision.

Grandal and his teammates weren’t looking to make a statement by not playing on Friday. Grandal pointed to the significance of Jackie Robinson Day. If you don’t play today than what is the point? We thought today was the day to play. If it wouldn’t have been Jackie Robinson Day today we could’ve possibly taken a different route, but we thought today was definitely the one day we needed to play.”

INF Nick Madrigal, one of Chicago’s top prospects, returned to the White Sox. He separated his left shoulder in his fifth game with the team. The 23-year-old second baseman was selected by the White Sox with the fourth overall pick in the 2018 draft. Catcher Zack Collins was optioned to Schaumburg to create a spot for Madrigal. Madrigal did not play on Friday night.

Brady Singer (1-3) is scheduled to start for the Royals against the White Sox on Saturday. The right-hander is 0-1 in three road starts this season with a 4.02 ERA.