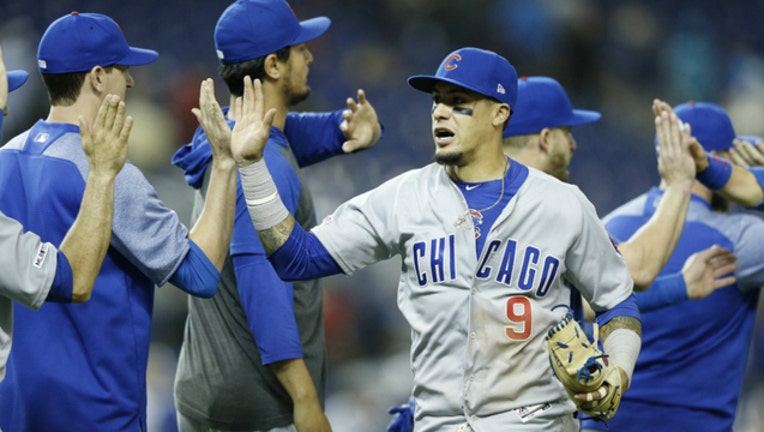 CHICAGO (AP) - Cole Hamels is starting to look like his old self.

The Cubs have won 4 of 5 since being swept in a three-game series at St. Louis last weekend. The Cardinals opened a season-high 10 game road trip that will take them to Miami and New York to face the Mets.

Before starting up at Wrigley Field, the Cubs finalized a three-year contract with Craig Kimbrel that guarantees the closer $43 million. While Chicago's bullpen should get a boost once Kimbrel arrives, its rotation is shaping up nicely.

Hamels (5-2) was sharp again, striking out a season-high 10 and walking one after a hard-luck loss last Sunday at St. Louis when he allowed two hits and one unearned run in seven innings. Harrison Bader, who doubled in the second, was the only Cardinal to reach second base against the left-hander.

"That's as good as anybody's thrown the ball against us all year," Cardinals manager Mike Shildt said. "He was in control, command, everything. Changeup, putting it where he wanted to. He had all his ingredients working and that's a tough recipe to beat.

Hamels said he "corrected some mechanical flaws" after giving up six runs in four innings in Houston on May 27. He threw 74 of 99 pitches for strikes on Friday, and the lefty is once again consistently getting ahead of hitters.

"It's the part of the game where you're really staying in control and you're keeping hitters off balance," Hamels said. "You're putting them in a situation where they're going to have to commit to pitches that might be out of their zone and not be in their slug zone."

"When you get to that point, hitters just can't relax and sit on things," Maddon said. "He was very unpredictable and very accurate.

Hamels said he "emptied the tank" to strike out the side in the eighth. Pedro Strop gave up a home run in the ninth to Paul DeJong before finishing his sixth save in eight chances.

Báez's 16th homer was his third in five games. Victor Caratini had two hits, including an RBI double.

Cardinals starter Miles Mikolas (4-6) exited after four innings with a bruised right forearm. He was struck by David Bote's hard comebacker, knocked the ball down and tossed to first for the final out in the bottom of the fourth.

"Just in the forearm," Mikolas said. "Just a little bit of swelling and a pair of seams on the good, meaty part of my arm. Didn't catch the bone, no breaks, no chips, no cracks."

Shildt wanted to wait a day to evaluate Mikolas further but didn't think the right-hander would miss a start.

Giovanny Gallegos entered and pitched two scoreless innings as three Cardinals relievers shut out the Cubs the rest of the way.

Báez went deep to right center on an 0-2 pitch with two outs in the first for a 2-0 lead.

With two outs in the fourth, Jason Heyward and Caratini lined back-to-back doubles to make it 3-0.

The 31-year-old Kimbrel helped Boston win the World Series, then turned down a $17.9 million qualifying offer from the Red Sox in November.

Kimbrel was optioned to Triple-A Iowa and will report to the Cubs training facility in Mesa, Arizona. The right-hander had been training in Florida as he awaited a deal.

Major League Baseball confirmed a two-game series in London between the Cubs and Cardinals at West Ham's Olympic Stadium on June 13-14, 2020.

Struggling RHP Michael Wacha (3-2, 6.30 ERA) is the tentative starter when the Cardinals open a three-game series Monday in Miami. He's come out of the bullpen for his last two appearances after giving up six earned runs in 4 2/3 innings in a start against Kansas City on May 22.

Cardinals: C Yadier Molina (right thumb tendon strain) is eligible to come off the 10-day injured list Saturday, but Shildt said the nine-time All Star won't rejoin the club until later in the Cardinals road swing. "We can't push it," Shildt said. "There's a tear, it has to heal, for grip strength and long-term."

Cardinals RHP Jack Flaherty (4-3, 3.76) faces Cubs LHP Jon Lester (4-4, 3.32) on Saturday night. Lester rebounded from a three-game personal slump with a solid seven-inning win over the Angels last Monday when he allowed a run on four hits. Flaherty beat the Cubs in a five-inning outing in St. Louis last weekend.