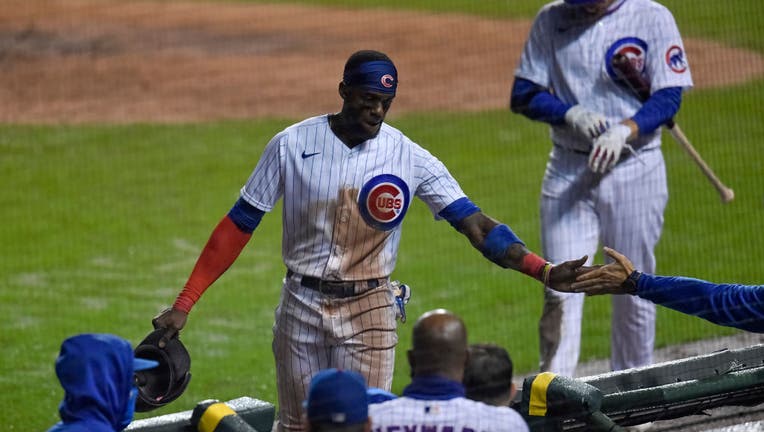 Cameron Maybin #15 of the Chicago Cubs celebrates with teammates after scoring in the fifth inning against the Cincinnati Reds at Wrigley Field on September 10, 2020 in Chicago, Illinois. (Photo by Quinn Harris/Getty Images)

Ian Happ drove in two runs and Hoerner, Kris Bryant, Anthony Rizzo and Cameron Maybin each had two hits as the Cubs broke out of an offensive funk and strengthened their grip on first place in the NL Central. Maybin and Contreras each drove in a run and scored twice in a game that started 75 minutes late because of rain and ended after 4 hours, 7 minutes, with 1 a.m. approaching.

“I felt like we haven’t come back in a while,” Cubs manager David Ross said. “It was nice to see the guys continue to have really good at-bats against a real good pitcher on the mound. Good at-bats, contact, really went a long way.”

Contreras and Hoerner, a young utility man, came through with the most timely plate appearances in this one.

The Cubs entered with just a .207 batting average at home, the worst in the majors. Contreras is one of Chicago’s few hitters who hasn’t been struggling lately.

“He just looks on time every swing,” Ross said. “Just really good overall at-bats for Willson and a great night for him.

Six relievers combined for 5 1/3 innings of six-hit ball and allowed only one earned run for the Cubs after Adbert Alzolay permitted three runs on three hits over 3 2/3 innings in his third start this season. Kyle Ryan (1-0) closed out the fourth and got the first out in the fifth to earn the win. Jeremy Jeffress pitched the ninth for his seventh save.

“With Adbert not getting really far, we got some really good innings out of the bullpen,” Ross said.

Nick Castellanos tripled to drive in a run against his former team, but the Reds lost for the third time in four games. Brian Goodwin, Jesse Winker, Shogo Akiyama and Tyler Stephenson each had an RBI.

Hoerner knocked in two runs with a double to start the scoring in a five-run fourth that chased Gray (5-3). The 23-year-old infielder then raced home from second with the go-ahead run on Happ’s single that second baseman Mike Moustakas gloved in shallow right field.

Moustakas tried to make a throw from the ground, but Hoerner beat it after relying on third base coach Will Venable to wave him home.

“I didn’t look at the ball at all,” Hoerner said. “I was just following his signal.”

The rally matched Chicago’s high for runs in an inning this season.

Gray scuffled as his pitch count climbed quickly in his second straight loss. The veteran right-hander was charged with five runs on six hits and three walks.

“I’m not going to sit here and tell you I felt great, but I felt OK,” Gray said.

Gray came off his worst outing this season and shortest of his career on Sept. 1 when he allowed six runs in the first inning to St. Louis and got only two outs. His turn in the rotation Thursday had been pushed back from Sunday.

The Cubs optioned RHP Colin Rea to the team’s alternate site in South Bend, Indiana, to make roster room for Alzolay. … OF Steven Souza Jr., designated for assignment on Sept. 5, cleared waivers and was granted his release. … Minor league INF Pedro Martínez was traded to Tampa Bay as a player to be named in the Aug. 30 deal for INF/OF José Martínez.

Reds: Moustakas started at second, but left in the sixth with a bruised left foot after being hit pitch in the fourth... DH Winker left in the seventh with back tightness. … OF Nick Senzel could return in a matter of days, manager David Bell said. Senzel was placed on the injured list Aug. 19 for an unspecified reason. … LHP Wade Miley (left shoulder sprain) had extra soreness Thursday after a side session Wednesday and “took a step back,” Bell said.

Cubs: Bryant was back in the lineup at third base after being held out Wednesday. He was hit by a pitch on the left elbow Tuesday.