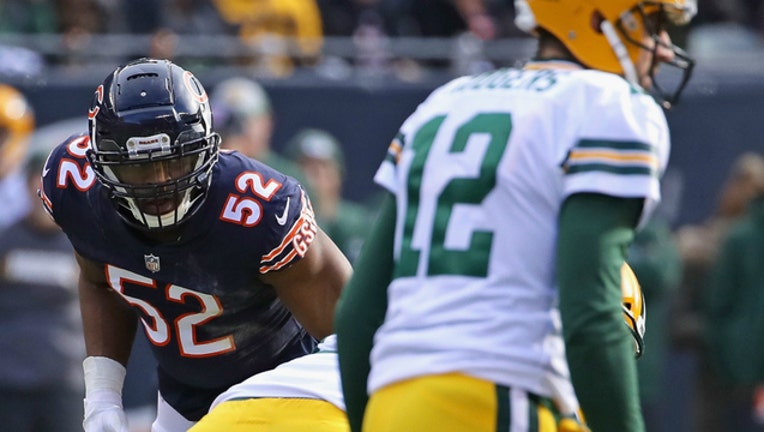 CHICAGO, IL - DECEMBER 16: Khalil Mack #52 of the Chicago Bears awaits the snap against Aaron Rodgers #12 of the Green Bay Packers at Soldier Field on December 16, 2018 in Chicago, Illinois. (Photo by Jonathan Daniel/Getty Images)

CHICAGO (AP) - As part of the celebration of its 100th season, the NFL will break from tradition and feature the Packers vs. the Bears in its season opener Sept. 5.

Usually, the Super Bowl champion is the home team for the prime-time opener, but the league wants to salute historic rivalries in 2019. None fits better than Chicago-Green Bay. The teams have met 198 times since 1921, when the Bears were the Chicago Staleys. Green Bay leads the series 97-95-6, including the clubs splitting two postseason games.

Staging the Thursday night game at Chicago's Soldier Field - even if it is a modernized version of the stadium - adds to the theme. There will be a free fan festival and concert in nearby Grant Park and, for the first time, the league has approved a free viewing event of the game in the park.

"We see that around other sports," said Peter O'Reilly, the NFL's executive vice president for league events. Such viewings, for example, have been a staple of the World Cup for decades, and hockey also has adopted the practice. "It will create a big festival environment."

This will be the first time since 2003 the Super Bowl champion has not played in the opener. New England instead will open at home in the prime-time game Sunday night, Sept. 8. The opponent has not yet been determined. The full schedule will be announced next month.

"With the 100th season, we want to do something to kick it off in a special way," said Hans Schroeder, the league's chief operating officer of media. "We're celebrating the Bears, one of the original member clubs, in their 100th season, and the Packers are in their 101st. It's an iconic matchup."

"George 'Papa Bear' Halas and the NFL's co-founders probably didn't imagine the federation they established 100 years ago in cities and towns across the Midwest would one day be the most successful professional sports league in the world," Emanuel said in a statement. "But that's what their vision achieved. Chicago - the most American of American cities - is the perfect venue for this game."

Schroeder and Brian Rolapp, the NFL's chief media and business officer, outlined other plans for the 100th season: NFL Films will produce a series that selects the 100 greatest teams, plays, games, characters and game changers; an all-time team is being chosen and will be featured in a TV series; and Peyton Manning will talk to fans around the country about the history of the NFL for another television series.

The league also disclosed plans for next month's draft that will supplement the proceedings in Nashville. Teams will make selections in eight of the original 13 towns that comprised the NFL for its first season. In Dayton, Ohio, the field used back then, Triangle Park, still exists, and a selection will be made there. The NFL also has committed to installing new turf on the field.

"This is a really special moment for our city," Dayton mayor Nan Whaley said. "We're excited that the NFL is recognizing the places that were there in the very beginning and that they are celebrating Dayton's special history in paving the way for the league with a donation that will leave a lasting impact in the community."

Each of the 32 clubs will stage a "Fantennial Weekend" during the regular season in which it will work in conjunction with local high school football teams on a Friday, stage a fan festival on Saturday, and then have former players from the NFL club at the game on Sunday. The home team also will reveal the greatest moment or play in its history that day.

Rolapp said the league is talking to DIRECTV about expanding the digital presence for its popular Sunday Ticket option that makes available all out-of-market games. The NFL could opt out of its contract with DIRECTV after next season.

"The world has really changed and how people consume games has changed," he said. "How do we broaden these rights, deliver more easily to digital platforms?"