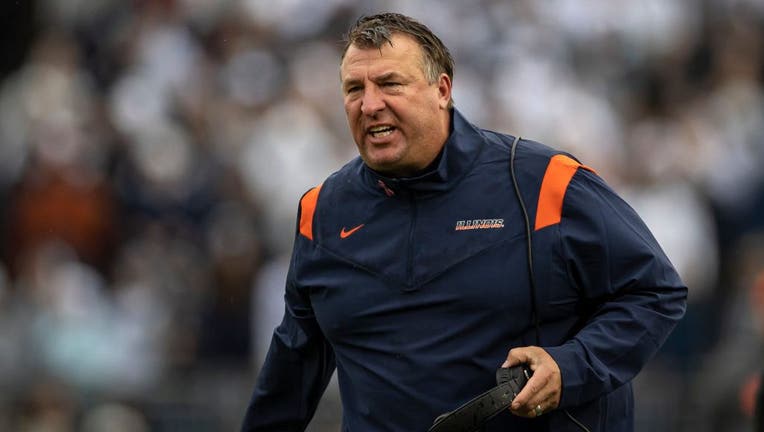 Head coach Bret Bielema of the Illinois Fighting Illini reacts to a play against the Penn State Nittany Lions during the first half at Beaver Stadium on October 23, 2021 in State College, Pennsylvania. (Photo by Scott Taetsch/Getty Images)

Bielema, in his first year coaching the Illini, said he developed mild symptoms Monday and tested positive later that night.

Assistant head coach George McDonald will fill in for duties that Bielema is unable to do remotely.

"I’m disappointed that I will not be with our team this week when we travel to Iowa, but I’m grateful that I’m vaccinated and received the booster shot last week," Bielema said in a statement. "Going back to last spring and this fall, I have a set protocol for anyone on our staff who may be removed due to COVID, including myself as a head coach. Our players and coaches have prepared for 10 games already this year and today’s news will just be a continuation of that process."

Bielema said he anticipates to be back with the team the following week ahead of their matchup with Northwestern.

Athletic Director Josh Whitman said the program prepared for the possibility of being without coaches due to the virus.

"Coach will remain as involved as possible throughout the week, and we are confident in Coach McDonald’s ability to serve in his place where needed, including during the game at Iowa on Saturday," Whitman said in a statement. "In the meantime, our medical staff is taking all necessary steps to ensure that we are monitoring the team and taking appropriate precautions to limit any potential spread within the program."