CHAMPAIGN, Ill. - A week after outlasting Penn State on the road in an NCAA-record nine overtimes, Illinois has an opportunity to show the program is finally rounding into shape under first-year coach Bret Bielema.

"Really excited about this week’s opportunity," Bielema said. "I think the greatest thing that we can do is continue to take this program and advance it forward."

Bielema understands that Illinois (3-5, 2-3) can’t rest on its accomplishments against Penn State, which was ranked No. 7 at the time.

"We put the game to bed very quickly (Sunday) night," Bielema said. "And we moved into our Rutgers preparation, a team that is obviously 3-4 and won their first three games and faced a pretty daunting Big Ten schedule and played very, very well against them." 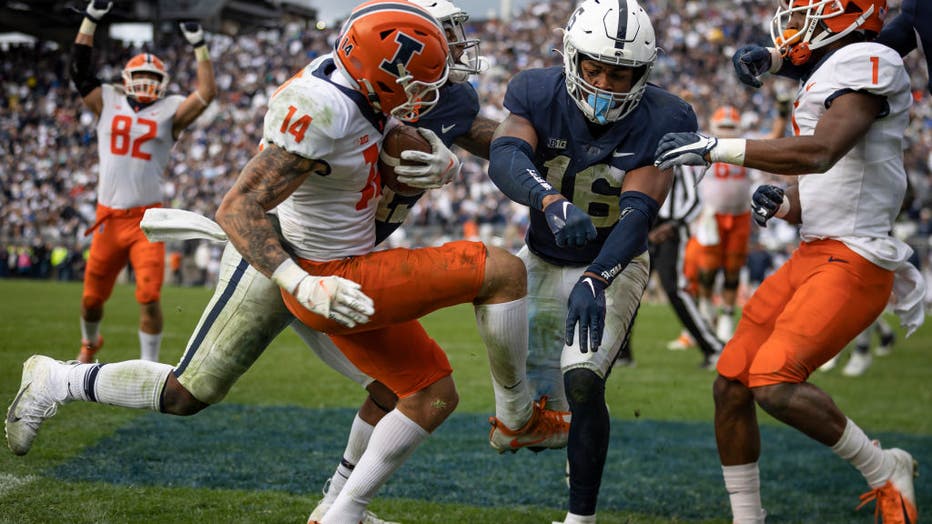 Casey Washington #14 of the Illinois Fighting Illini catches a two point conversion in the ninth overtime to win the game against the Penn State Nittany Lions at Beaver Stadium on October 23, 2021 in State College, Pennsylvania. (Photo by Scott Taets

"We are now going into our eighth week and we still have the chance to write the story for the 2021 season," he said. "But the arrow on this program is up. We’ll just keep moving. But we need our fans to stick with us. I guarantee you our players will continue to work hard, our coaches will. It’ll turn."

The Illini will be without quarterback Art Sitkowski, who left the Penn State game with an arm injury. Medical tests confirmed it was broken and he is out for the rest of the season following surgery Wednesday.

Sitkowski transferred to Illinois this offseason from Rutgers. He was 74 of 148 passing for 698 yards, six touchdowns and two interceptions in five games this year.

Brandon Peters, who lost the starting job earlier this season to Sitkowski, is the likely starter against Rutgers with Matt Robinson the backup.

Peters is 40 of 82 passing (48.8%) for 410 yards, one touchdown and one interception. In his career with Michigan (two seasons) and Illinois (three seasons), Peters has 3,403 yards, 26 touchdowns, 12 interceptions and an overall 52.8% completion percentage.

Running back Chase Brown, who left with an injury in the Penn State game, should be cleared for the Rutgers game along with offensive tackle Vederian Lowe.

Rutgers senior wide receiver Bo Melton returned to the lineup after being sidelined by a shoulder injury and matched his career high with eight catches for 101 yards and a touchdown against Northwestern two weeks ago.

Last year, he had a career-high 150 yards receiving with touchdowns of 29 and 66 yards in a loss to the Illini. Running back Isaih Pacheco had 133 yards rushing in the game. It was the third time Rutgers had a 100-yard rusher and receiver in the same Big Ten game (2014 and 2015, both against Indiana).

Throwing to Melton will be quarterback Noah Vedral, who leads the Rutgers offense with 1,274 passing yards and another 194 yards on the ground.

The guy to watch on defense for the Scarlet Knights is Olakunle Fatukasi. He wears the No. 3, hence his nickname, "O3."

Fatukasi is averaging 10.1 tackles per game and is ranked seventh nationally and second in the Big Ten. He had a game-high 13 tackles in the 21-7 loss at Northwestern. He needs 16 tackles to become the 12th player in school history with 300 career tackles.

Illinois was able to put up 357 yards rushing on a tough Penn State defense. If Illinois can get Brown involved early and often -- he rushed for 257 yards against Charlotte and 223 against the Nittany Lions -- it will be a good step toward beating Rutgers.