LAKE FOREST, Ill. - Many things are changing for Chicago Bears quarterback Justin Fields since Matt Eberflus took over as the coach.

It was that way for the Bears on both sides of the ball on Tuesday as they went through the first day of a voluntary minicamp under their new coach.

"It’s defintely a different mindset than last year so I’m ready for the roll and I’m ready to lead this offense and lead this team," Fields said.

Fields wants to be named the starter, the sooner the better.

Fields said starting over in a new offense will be challenging. The goal is simply to get it down.

"It would be easier if it was the same offense as last year and we were just able to grow on that," Fields said.

Offensive coordinator Luke Getsy is installing an offense similar to the one run in Green Bay where he was quarterbacks coach working with two-time defending NFL MVP Aaron Rodgers.

Fields needs to improve his delivery over last year when the Bears won two of his 10 starts. Eberflus has an idea where it starts.

"I think it’s about footwork and then the timing, the footwork and timing," Eberflus said. "There should be a clock on every single drop that he takes. There’s the drop, the number of steps and then there’s a hitch and a second hitch. And the ball has to be out of his hands on the first or second one. Based on the coverage and based on the call."

It takes more than Fields and the new system to be successful and the Bears haven’t spent wildly in free agency. So they’re counting on the draft for help even without a first-round pick.

Fields likes the idea of taking an Ohio State receiver. Former teammates Chris Olave or Garrett Wilson are in the draft.

Olave, in particular, has Fields’ eye.

"He’s fast, of course, he has great hands, great route-runner and he’s probably one of the best deep-ball trackers that I’ve ever played with in my life," Fields said. "So he’s a great player, great person. His mindset and the way he carries himself is awesome. That’s my guy." 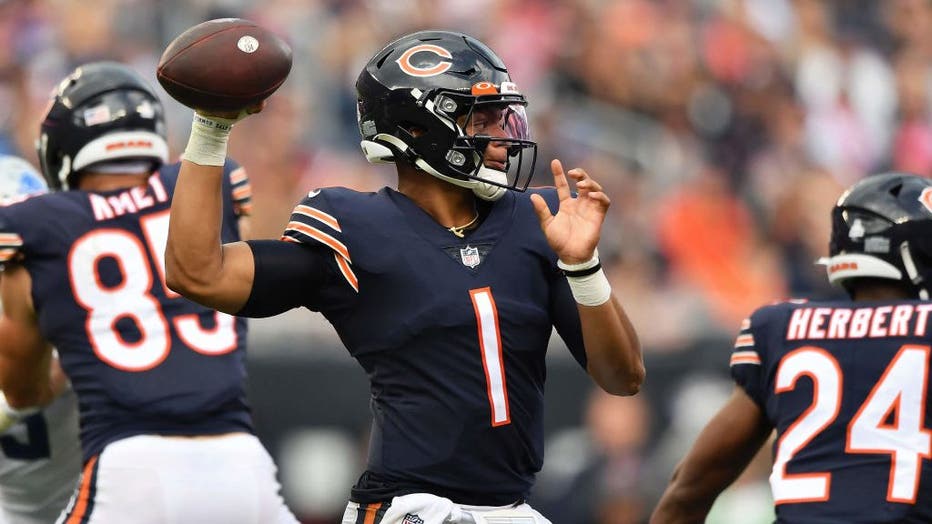 Quarterback Justin Fields #1 of the Chicago Bears passes against the Detroit Lions at Soldier Field on October 03, 2021 in Chicago, Illinois. (Photo by Jamie Sabau/Getty Images)

Eberflus, who was the Colts’ defensive coordinator last season, has taken the Bears back to a 4-3 front after the team played a 3-4 for seven seasons.

It’s going to take an adjustment period for defensive players, just like it will be an adjustment playing without standout Khalil Mack. He was dealt to the Los Angeles Chargers for a second-round pick and a sixth-rounder next year.

"I was actually at a friend’s house, and a friend told me, and I didn’t believe him," Gipson said.

The new scheme has a different defensive line with nose tackle Eddie Goldman and defensive ends Akiem Hicks and Bilal Nichols gone. The switch to a 4-3 is just as drastic for some players, but not Gipson.

"It is a little bit natural," said Gipson, who played end in a 4-3 at Tulsa. "I haven’t been back to those ways in two years. But going back now and getting the reps and practice reps I had after workouts, it felt more natural."

The workouts are voluntary and defensive linemen Robert Quinn and Mario Edwards Jr. were not in attendance, nor was safety Eddie Jackson. Roquan Smith, who is hoping for a contract extension, was at the workout Tuesday. ... The Bears lined up Larry Borom at left tackle after he played mostly on the right side last year. Teven Jenkins was at right tackle after he played left tackle last year. Eberflus said the beginning of minicamp is always open for experimentation.