CHICAGO - Justin Fields took some inspiration from Russell Wilson and flashed the skills that made him the No. 11 overall pick in the draft.

It was just what the Bears needed.

Fields brushed off a nightmarish first start, and Chicago bounced back from one of the worst offensive performances the NFL has seen to beat the winless Detroit Lions 24-14 on Sunday.

Fields and the Bears (2-2) were in much better form coming off a brutal loss at Cleveland last week. They scored touchdowns on their first two possessions and rang up 373 yards after being held by the Browns to 47, the ninth-lowest total in league history.

"I saw Russell Wilson posted a tweet this past week saying, ‘I love adversity,’ and I truly do love that because it just brings a whole different person out of me," Fields said. "And in some ways I’m glad last week happened. I think if we would’ve won last week, it wouldn’t have pushed us as much to get better and practice hard." 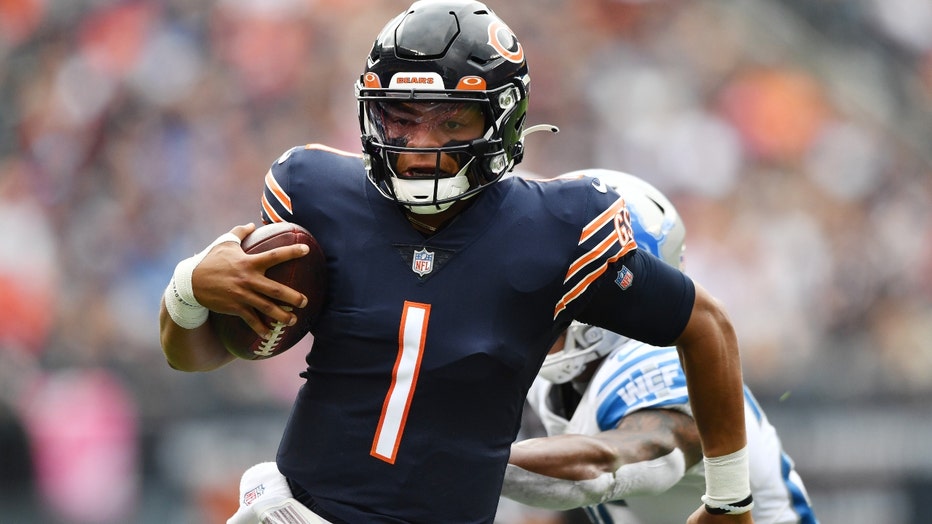 Quarterback Justin Fields of the Chicago Bears runs with the ball against the Detroit Lions in the first half at Soldier Field on October 03, 2021 in Chicago, Illinois. (Jamie Sabau/Getty Images / Getty Images)

Fields looked more comfortable, completing 11 of 17 passes for 209 yards in his second consecutive start with Andy Dalton sidelined because of a bone bruise in his left knee. The former Ohio State star threw an interception. But he was also sacked just once, a big improvement after being taken down nine times for 67 yards while throwing for just 68 the previous week.

Was it enough to supplant Dalton as the No. 1 quarterback? Coach Matt Nagy didn’t say.

"All we wanted to do, quite honestly, today was win the game, go to 2-2, and be able to talk about everything else as we go," he said. "You guys know in regards to Andy, we’re working through what he went through this past week, so we’ll see where he’s at."

David Montgomery ran for 106 yards and two touchdowns before leaving with a knee injury. He scored on Chicago’s first two possessions, running it in from the 4 and 9 to make it 14-0, but hobbled off the field following a 5-yard run early in the fourth quarter. Nagy said he wasn’t sure how serious the injury is.

Darnell Mooney caught five passes for a career-high 125 yards, including a 64-yarder.

Robert Quinn had a strip-sack with the Lions deep in Chicago territory. Khalil Mack added a sack and fumble recovery, and the Bears got some payback for a loss to Detroit at Soldier Field last season that capped a six-game skid.

The Lions (0-4) remained winless under coach Dan Campbell and general manager Brad Holmes and lost their eighth straight since beating the Bears.

"I felt like there was a little more anger than there was disappointment, and that’s a good thing, because that’ll drive you to come back," Campbell said.

"I couldn’t ask for a better group of guys to do it with," Goff said. "Fight through this adversity and come out on the other side."

The Lions had the ball on the Chicago 8 with about 4:20 remaining. But the Bears stopped them when they opted to go for it on fourth-and-1 rather than kick a field goal.

The Bears had 200 yards in the first half and took advantage of two turnovers by Detroit after the Lions got inside the 10 in building a 14-0 lead.

They went 75 yards for a touchdown on the game’s opening possession, capped by Montgomery’s 4-yard TD.

Detroit then got to the 8, only to have the threat end on a strange turnover. Center Frank Ragnow snapped the ball as Goff was walking toward the line, and it ricocheted off the quarterback to Chicago’s Bilal Nickols.

Fields hit Mooney with a 64-yard pass two snaps later, and Montgomery ran it in from the 9 on the first play of the second quarter to make it 14-0.

The Lions then opted to go for it on fourth down at the Chicago 5 rather than kick a field goal. And the Bears’ Alec Ogletree deflected a pass intended for D’Andre Swift in the end zone.

Detroit fumbled again inside the 10 when Quinn strip-sacked Goff on third down at the 3. Mack recovered, and the Bears took over at the 23.

Nagy acknowledged offensive coordinator Bill Lazor called plays instead of him, after refusing to say during the week who would.

He would not say if Lazor will continue to call plays.

Nagy handed those duties to his offensive coordinator last November when the Bears were in a six-game losing streak. But in April, Nagy announced he would call plays again.

Lions: Campbell said LB Romeo Okwara (foot) and Ragnow (toe) could both miss time after being injured in the first half. He added Okwara appeared to be in worst condition than Ragnow.