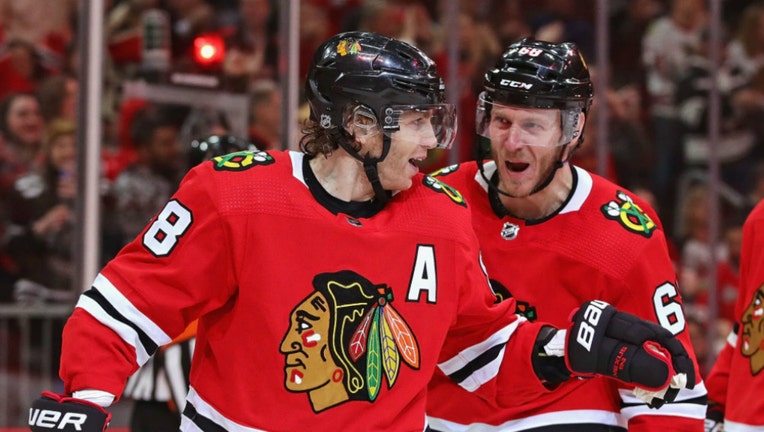 CHICAGO, ILLINOIS - MARCH 11: Patrick Kane #88 of the Chicago Blackhawks (L) celebrates his second goal of the game with Slater Koekkoek #68 at the United Center on March 11, 2020 in Chicago, Illinois. The Blackhawks defeated the Sharks 6-2. (Photo b

CHICAGO - When Patrick Kane and the Chicago Blackhawks left the ice after their last game, they had little chance of making the playoffs.

Whenever they play their next game, it sure looks as if they will be one of 24 teams with a shot at the Stanley Cup.

Welcome to the strangest postseason berth in franchise history, one so unusual that it isn’t exactly a playoff appearance at the moment. Assuming everything goes according to plan and the final details are ironed out between the league and the players’ union, the Blackhawks will play Connor McDavid and the Edmonton Oilers in a best-of-five qualifier series for the playoff bracket.

“It’s been a weird three months,” Kane said during a video conference call with reporters.

Chicago hasn’t played since a 6-2 victory over the San Jose Sharks on March 11. The Blackhawks were last in the Central Division and 12th in the Western Conference standings when the NHL season was suspended the next day because of the coronavirus pandemic.

While the Blackhawks were awaiting word on the fate of their season, team president John McDonough was fired by owner Rocky Wirtz. Danny Wirtz, Rocky’s son and a vice president with the team, replaced McDonough on an interim basis.

“I think he did a lot of great things for your organization, so I thank him from that perspective,” Bowman said. “Similarly, I’ve had a chance, I’ve known Danny Wirtz for a few years now and I’ve had a chance over the last six weeks to work closely with Danny, Rocky as well. And they’ve been fantastic to me, too. So I look at this for me as the opportunity to learn from Danny.”

The surprise move could lead to dramatic changes for Chicago’s front office once the season is over. But Kane and Co. are hoping to put that off for a while.

The Blackhawks took two of three against Edmonton this season, winning 3-1 way back in October and 4-3 on March 5. They should get forward Drake Caggiula and defensemen Adam Boqvist and Calvin de Haan back for training camp 2.0 next month after they were sidelined by injuries when the season was suspended.

The 29-year-old de Haan was expected to miss the rest of the year after he had right shoulder surgery in December. His return could be particularly helpful for the Blackhawks as they try to slow McDavid and Leon Draisaitl, who won his first Art Ross Trophy for leading the league with 110 points.

“Obviously, we’ve got to get him on the ice, go through camp, and hopefully everything continues to progress as far as his health,” Chicago coach Jeremy Colliton said. “But I thought the games he did play he was steady back there.”

The Blackhawks started voluntary workouts this week, with Kane and fellow forward Alex DeBrincat among the first players to return to the team’s practice facility.

The dates and site for their series against Edmonton are still to be determined. But Kane thinks making the most of all the time before the games could be a big key to a deep playoff run.

“It’ll definitely be an advantage for a team that can come back and get together quickly and have a good training camp and kind of find their game right away,” he said. “So I think it might be some surprises, you know, if we get down to playing.”