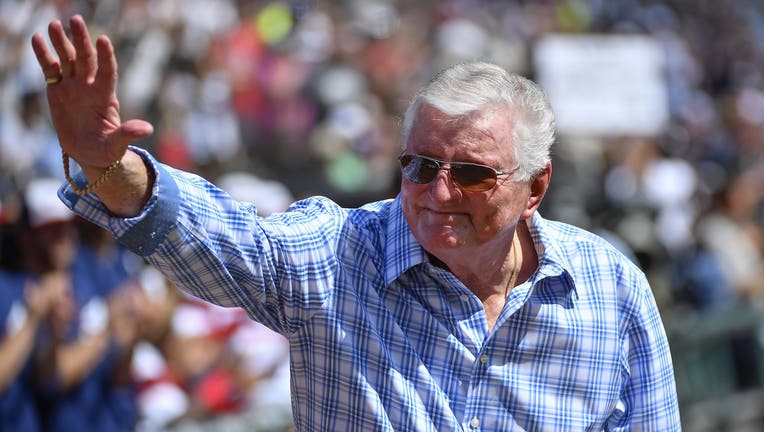 Chicago White Sox broadcaster Ken 'The Hawk' Harrelson acknowledges the crowd on Hawk Day as he was honored by the White Sox before a game against the Boston Red Sox on September 2, 2018 at Guaranteed Rate Field in Chicago. (Quinn Harris/Icon Sportswire via Getty Images / Getty Images)

“It’s just such an honor,” Harrelson said. “I’ve always considered myself to be probably as lucky, if not the luckiest, human being who ever stepped two feet on the face of the earth."

Before starting his 43-season broadcast career, the 78-year-old was an outfielder and first baseman from 1963-71 for the Kansas City Athletics, Boston, Cleveland and Washington.

He was part of Boston’s “Impossible Dream” team that reached the 1967 World Series, having been signed by the Red Sox in late August after being released by Kansas City. Harrelson then led the majors with 109 RBIs in 1968 with Boston.

He started broadcasting for the Red Sox (1975-81) and switched to the White Sox in 1982. Harrelson became Chicago's general manager after the 1985 season, left after one year and became a New York Yankees' broadcaster in 1987.

“I’ve won some awards in my life and done some things in my life that I was very proud of, but this was something different,” he said. “I really haven’t digested it yet.”

Harrelson will be recognized at the Hall in Cooperstown, New York, during an awards presentation on July 25, a day before induction ceremonies.