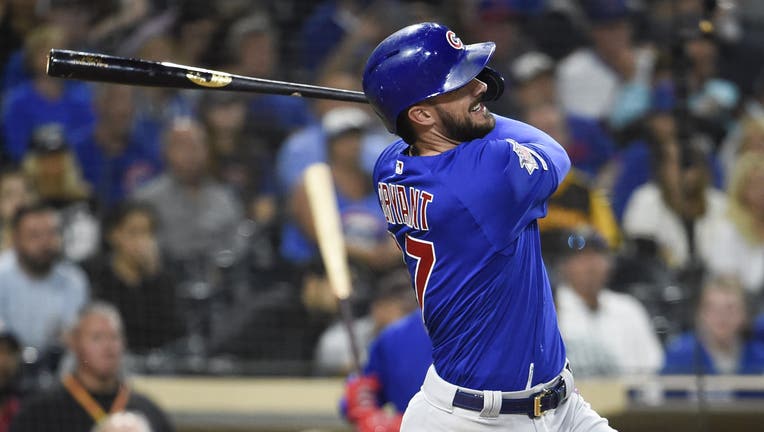 SAN DIEGO, CA - SEPTEMBER 10: Kris Bryant #17 of the Chicago Cubs hits a two-run home run during the eighth inning of a baseball game against the San Diego Padres at Petco Park September 10, 2019 in San Diego, California. (Photo by Denis Poroy/Getty

CHICAGO - Arbitrator Mark Irvings accepted Theo Epstein's rationale for delaying Kris Bryant's debut at the start of the 2015 season, concluding there was no proof of "a nefarious motive" by the Chicago Cubs president of baseball operations to delay the third baseman's eligibility for free agency.

In a 42-page decision obtained by The Associated Press, Irvings accepted Epstein's explanation that injuries to Mike Olt and Tommy La Stella prompted the timing of Bryant's call-up to the Cubs in April 2015. Had Bryant been brought up one day earlier, he would have been eligible for free agency after the 2020 season. Instead, he will be eligible after the 2021 season.

"The association could not satisfy its burden of proving that the Cubs' assignments of Bryant were done in bad faith to mask service time manipulation," Irvings wrote. "Given this finding, there is no need to resolve, and this decision does not address, the global issue of whether clubs have the right to manage service time to delay a player's achievement of the service benchmarks for salary arbitration and free agent eligibility."

Hearings were held last Oct. 21-23, with a final day on Nov. 6. Irvings issued his decision to the parties on Feb. 4, but it was not made public.

Now a three-time All-Star third baseman, Bryant hit .425 with nine homers in 40 at-bats during spring training in 2015. Hampered by a sore shoulder, he made three errors in eight games, a factor cited by Epstein as among the reasons for having Bryant start the season at Triple-A Iowa.

"The fact that Bryant amassed the worst fielding percentage of any third baseman in baseball during spring training cannot be ignored," Irvings wrote.

Olt started for the Cubs at third base on opening day and La Stella in the second game. La Stella strained an oblique muscle on April 10 and Olt was hit on his right wrist by a pitch the following day, then diagnosed with a fracture on April 15.

Bryant batted .321 with three homers in seven games at Iowa. The Cubs were off on April 16, and Bryant was brought up to make his debut against San Diego on April 17. If Bryant had been called up a day earlier, he would have had exactly six years of major league service — the time needed for free agency — by the end of the 2020 season.

"The association was not able to produce memos, emails or texts from Epstein to show he had a nefarious motive at variance with his public comments," Irvings wrote, adding that "unforeseen events had forced Epstein's hand."

"He made a decision based on what he concluded were the acute needs of the major league team, even though it posed a risk to the development of his top prospect," Irvings added. "The debatable wisdom of that decision cannot be the grounds for finding that Epstein lacked a basis in fact or reason for keeping Bryant with Iowa until April 17."

The players' association has been critical of teams' actions that have delayed eligibility for salary arbitration and free agency. Union head Tony Clark has said the matter will be brought up in bargaining for the labor contract that follows the current deal, which expires in December 2021.

"Epstein's explanations cannot be discounted as pretextual or dishonest. While other baseball people could certainly have decided that Bryant should have been put on the opening day roster, Epstein had bases in both fact and reason for reaching a different conclusion," Irvings wrote.

“He had a philosophy of player development that he had followed at that point for 14 years as the person in ultimate control of baseball operations at two big-market baseball clubs,” the decision said. "The association was not able to produce a single example before or since of a first-year minor league player whom Epstein brought up in September or of a true rookie who started the season on the 25-player roster. The association is correct that Bryant's minor league and spring training numbers were exceptional, even unprecedented, but it cannot be said that consistent adherence to a philosophy that had proven successful is evidence of bad faith motivation."

Selected by Chicago with the second overall pick on the 2013 amateur draft, Bryant was voted National League MVP in 2016 as the Cubs won the World Series for the first time since 1908. The 28-year-old agreed in January to an $18.6 million, one-year contract.

Attempting to show there had been service time manipulation, the union cited a Feb. 26, 2015, email from Cubs director of major league scouting Kyle Evans to general manager Jed Hoyer suggesting talks to trade outfielder Ryan Sweeney to Toronto early in the season as a way of clearing a roster spot for Bryant. It also cited a March 20 remark to Bryant by farm system director Jaron Madison about why Bryant was walking through the minor league side of the complex when he had not been assigned there "yet," and a text from Evans to Epstein and Hoyer predicting Bryant would homer and made an "unreal play" in the outfield during an exhibition game "just to be more of a pain."

The union also referred to a slide made for Epstein's presentation to Cubs ownership on March 19, 2015, that indicated Bryant would be under club control through 2021. Irvings said the Epstein's presumptive position and was "not evidence of deceit."

"Epstein stated that a player's development and the acute needs of the major league club, not the impact on a player's service time accrual, dictated the timing of the initial call-up. He said there is too much uncertainty about future service time accrual to make decisions based on arbitration and free agent eligibility," Irvings wrote. "Epstein testified that Bryant had not made the necessary defensive improvements during spring training that might have caused Epstein to go against his presumption that Bryant, like all other top prospect rookies in his 13 years as a general manager, would start the season in AAA."

Chicago started the 2015 season 5-3 and finished 97-65, earning a wild-card berth. The Cubs advanced to the NL Championship Series before getting swept by the New York Mets.

"Ensuring Bryant's multiyear success was of much greater competitive benefit to the club than perhaps enhancing the chances of the team winning a few extra games at the beginning of the season," Irvings wrote. "The fact that the team won five of their first eight games before Bryant was called up was a further indication that Epstein's calculation was a reasonable, and even in retrospect a successful, balancing of short and long term competitive goals."

In a holding that could be cited in future grievances, Irvings ruled that "while this award will not reach the broader issue of whether a club can base a roster decision solely on the desire to delay free agency, the concept of good faith and fair dealing is relevant for purposes of this narrower analysis."

"The association has not proven that ... Epstein acted in bad faith," Irvings said. “Repeatedly from the emergence of the Bryant as the top minor league prospect, Epstein articulated his belief that Bryant would presumptively start the 2015 season in AAA.”