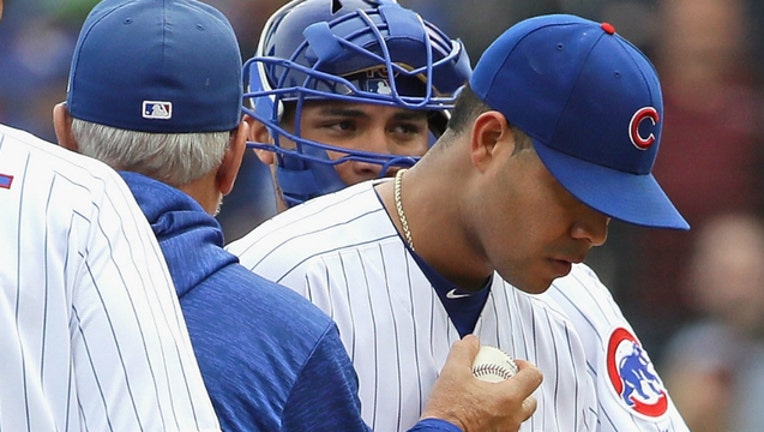 "What a great day," Lambert said. "Wrigley Field. It was awesome. The atmosphere. The fans. it was crazy out there. I thought I would go out there and feel the heart pumping, but I was all right."

A 22-year-old right-hander selected in the second round with the 44th overall pick of the 2015 amateur draft, Lambert retired 11 straight batters during a stretch before Kris Bryant doubled with one-out in the sixth. Bryant scored on Javier Báez's two-out single.

Lambert (1-0) walked one and threw 63 of 95 pitches for strikes, ending his outing by striking out the side in the seventh. He set a Rockies record for strikeouts by a pitcher in his debut.

He also singled on his first pitch as a big league batter, using a two-tone bat to loop a fastball from José Quintana (4-5) to right-center field.

"He's a good athlete, even when he swings the bat - if you really watch his mechanics are outstanding," Cubs manager Joe Maddon said. "He was able to take the game he's been pitching in Triple-A and bring to the big leagues."

Lambert, from San Dimas, California, pitched with family looking on - including brother Jimmy, a 24-year-old right-hander with Double-A Birmingham in the Chicago White Sox organization. He is on the seven-day injured list,

"They're my support system," Lambert said. "So I was super glad they were all able to make it out."

Lambert, 2-2 with a 5.07 ERA in 11 starts this season at Triple-A Albuquerque, was called up before the game.

"He threw great the whole game," Rockies manager Bud Black said. "Each inning, pitches were down. He wasn't stressed in any one inning. "He maintained his delivery. Maintained his fastball. Fastball, change, breaking ball, combo, behind the count changeup, high fastballs, fastballs down and away at the knees. That was great."

Black, in his 12th season as big league manager following 15 as a player, maintained it was one of the best debuts he has viewed.

"I've seen a lot of them both as a teammate, pitching coach and manager, but that was fun," Black said. "I was happy for him. What an impressive outing - stayed calm."

Jairo Díaz pitched a one-hit eighth and Scott Oberg threw a perfect ninth for this third save, completing a five-hitter.

Colorado rebounded after losing the first two games of the series. Chicago's NL Central lead was cut to a percentage point over second-place Milwaukee.

Quintana dropped to 0-4 in his last six starts, giving up three runs and six hits in 7 1/3 innings. He has not won since beating St. Louis on May 5.

Colorado took a 2-0 lead in the third when David Dahl hit an RBI single and scored on the first of Ian Desmond's two doubles. Chris Iannetta hit a sacrifice fly in the seventh after Desmond doubled and Bryant lost Mark Reynolds' fly in the sun, allowing the ball to drop for a double

Rockies: Colorado placed LHP Mike Dunn on the 10-day IL, retroactive to Wednesday, due to shoulder inflammation. ... Colorado moved LHP Harrison Musgrave (left elbow flexor strain) to the 60-day IL. ... After throwing successfully to hitters off a mound on Wednesday, RHP Wade Davis (left oblique strain) is "right around the corner" from returning, according to manager Bud Black. Black wouldn't specify a date.