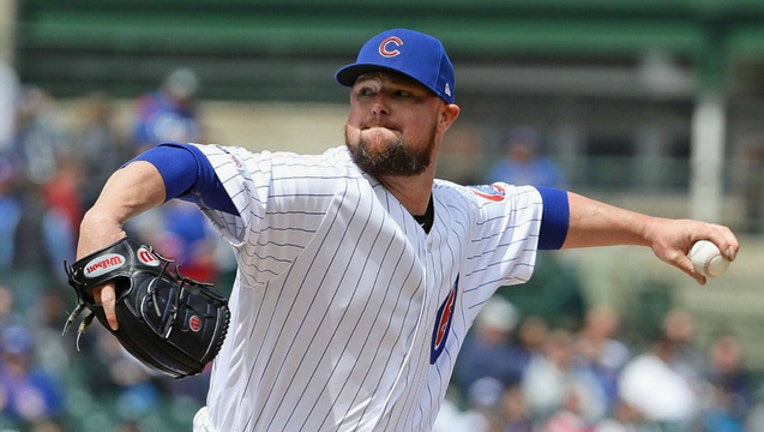 CHICAGO (AP) - Jon Lester showed he still has got it all going on in his 14th major league season.

Lester homered, tied a career high with three RBIs and pitched effectively into the seventh inning to lead the Chicago Cubs past the Pittsburgh Pirates 10-4 on Saturday.

All-Star catcher Willson Contreras' three-run homer and Lester's two-run single off the left-field wall were the big hits in the Cubs' seven-run first inning. In the third, the 35-year-old left-hander connected for his third career home run - all with the Cubs at Wrigley Field - for the NL Central leaders.

"I think this is the best version of Jon that I've seen as a total athlete, a pitcher," manager Joe Maddon said. "You talk about his hitting also if you want, everything about his performance."

Lester (9-6) allowed three runs and eight hits, while striking out six and walking none in 6 2/3 innings before leaving after 98 pitches.

Lester joked that he's feeling old and has to mind more details to keep performing at a level that's made him a five-time All-Star. But the lefty has won four of his last five starts and is showing no signs of slowing down.

"The last I don't know how many outings I've felt better about my stuff and where I've been at," Lester said. "Hopefully I can kind of ride that momentum as we go forward in the second half and down the stretch."

After spending his first nine seasons in the American League, Lester has embraced hitting in this last five with the Cubs.

"I take a little more pride in that since I've been over here," he said. "Just trying to get quality at-bats and see some pitches."

Addison Russell drove in two runs as the Cubs won for the fourth time in five games.

Starling Marté hit a pair of solo shots to give him three homers in two days in Chicago, and Jung Ho Kang also had a long solo homer.

Chicago sent 12 batters to the plate in the first and chased Pittsburgh starter Jordan Lyles (5-6) after only two outs.

Anthony Rizzo beat a shift with a dribbling RBI single to left to start the scoring before Contreras hit his 19th homer to the basket in right-center. After Lester drove in two more, Javier Báez added an RBI double.

Lyles yielded seven runs and four hits with four walks before being replaced by Chris Stratton.

"I was just spraying balls all over the place," Lyles said. "There was a lot that went on in that first inning, a couple of unnecessary walks. Just a bad day overall."

Lester's homer to left made it 8-0 in the third. Russell singled in two runs in the fourth to push it to 10-0.

Kang homered in the fifth and Marté connected in the sixth.

Lester was replaced by Brandon Kintzler in the seventh after the Pirates stroked three singles to made it 10-3. Marte homered again in the eighth off Randy Rosario.

A group of fans shoved and punched each other in the center-field bleachers in the top of the third inning. The skirmish prompted oohs and aahs from the crowd of 40,286 and looks from Cubs players on the field before security personnel intervened.

Pirates catcher Francisco Cervelli, out since suffering a concussion on May 25, said he's working with a new doctor and pursuing "difficult and hard" therapy he hopes will make him feel "normal." He had no timetable for his return.

Cervelli was hurt when he was struck in the helmet by Joc Pederson's broken bat backswing in a game against the Dodgers at Pittsburgh. While sidelined, the 33-year-old has practiced at other positions, but on Saturday he denied he had ruled out ever catching again.

Pirates: OF Corey Dickerson (right groin strain) was out of the starting lineup again, but pinch-hit in the seventh and grounded into a fielder's choice.

Cubs: LHP Cole Hamels (left oblique strain) threw off flat ground for a second straight day on Saturday. Hamels has been out since suffering the injury in a start at Cincinnati on June 28. ... RHP Carl Edwards Jr. (left thoracic strain) was scheduled to make a rehab appearance at Triple-A Iowa on Saturday. ... LHP Xavier Cedeño (left wrist inflammation) is expected to pitch at Iowa on Sunday

Pirates RHP Trevor Williams (3-2, 4.54) faces Cubs LHP José Quintana (6-7, 4.19) on Sunday. Williams is 1-1 with an 8.31 ERA in three starts since returning from a right side strain. Quintana has been sharp in his last two starts, winning both and allowing just three runs over 13 innings.