LAKE FOREST, Ill. - The Chicago Bears will wait until game time to announce their starting quarterback for Sunday’s game against Detroit, choosing between Andy Dalton and rookie Justin Fields.

Both quarterbacks are dealing with injuries, but Fields has been able to go through full practices the entire week while Dalton has been limited every day. Dalton is suffering from a bone bruise to his left knee while Fields wore a brace on his injured right hand all week in practice.

"I feel like, again, the good part about both of those guys is that they’re both progressing in the right way," Nagy said. "And then what we’ve got to do is be able to see where Andy’s at and really, up until Sunday. That’s why it’s the game-time decision." 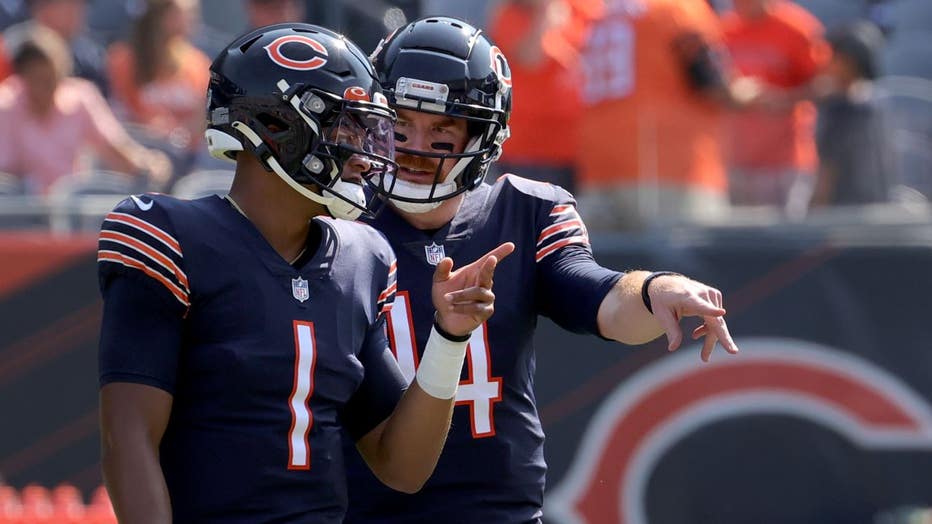 Fields injured his right thumb during last weekend’s 26-6 loss to the Cleveland Browns. Dalton got hurt right before halftime in Week 2 against Cincinnati.

Dalton’s mobility could be affected if called upon to start.

"You think about that. And once you get by that then you can start playing football."

The Bears (1-2) are last in the NFL in offense and passing. Their offense has scored three touchdowns, and they haven’t had one since Dalton left the second game. 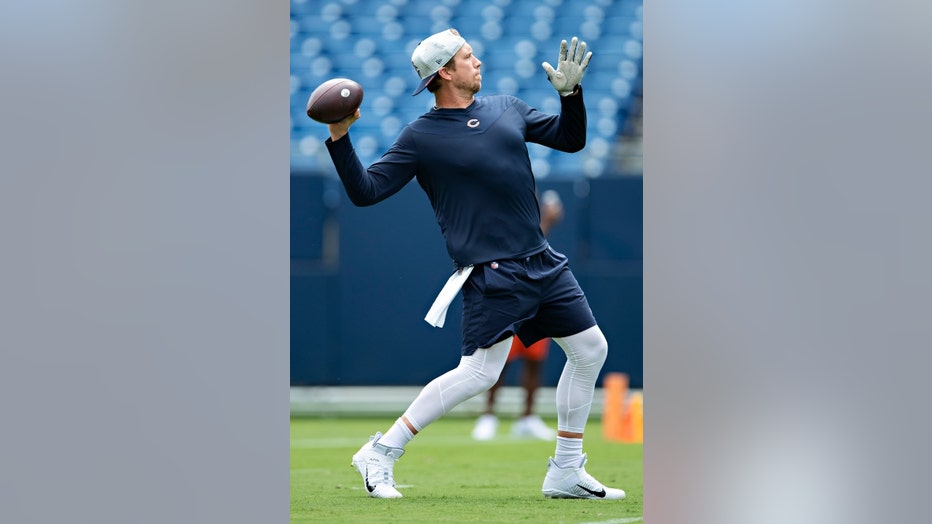 Nick Foles of the Chicago Bears warms up before a NFL Preseason game against the Tennessee Titans at Nissan Stadium on August 28, 2021 in Nashville, Tennessee. The Bears defeated the Titans 27-24. (Wesley Hitt/Getty Images / Getty Images)

"I think the biggest thing is that it’s felt better every day and it’s just kind of where I’m at with this thing is keep improving, keep getting better and that’s all my focus is right now," Dalton said.

Fields was 6 of 20 for 68 yards and was sacked nine times in the loss to the Browns.

Fields feels he and the rest of the offense are prepared to bounce back.

"When you have a performance like that, times like that, adversity like that, you need those things in life just to slap you in the face and tell you to refocus," Fields said. "I’m not saying that we were complacent, but really just, when you go out there and perform like that that’s not what we want to do.

"So that happening, of course, I think that was a little extra motivation this week on being clean on everything."

The Bears will have nose tackle Eddie Goldman available for the first time in a game since 2019 after he was removed from the injury report. Goldman suffered a knee injury just before the regular season and missed the first three games.

Linebacker Khalil Mack (foot sprain) is questionable for the matchup with the Lions, and safety Tashaun Gipson (hamstring) has been ruled out. Also out for the Bears is linebacker Joel Iyiegbuniwe (hamstring). Wide receiver Darnell Mooney (groin) and cornerback Xavier Crawford (back) are questionable.