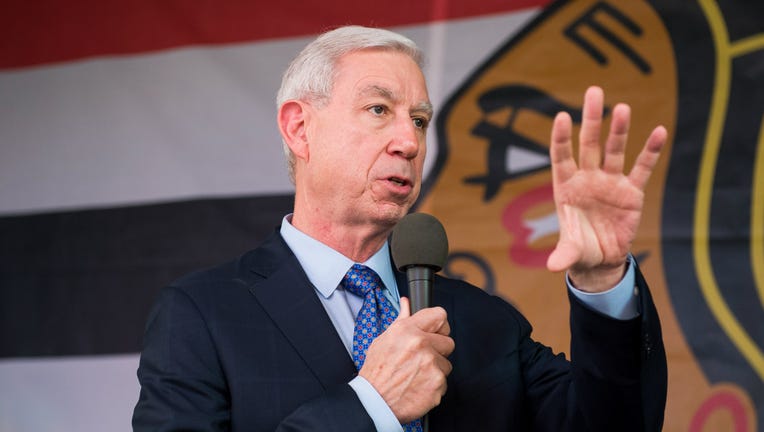 John F. McDonough speaks to fans prior to the season opener against the St. Louis Blues at the United Center on October 12, 2016 in Chicago, Illinois. (Bill Smith/NHLI via Getty Images / Getty Images)

CHICAGO - Former Chicago Blackhawks president John McDonough, in his first public comments since he was fired, called his time with the team “the ride of a lifetime.”

McDonough also praised owner Rocky Wirtz and his family in a statement released by the team on Tuesday, one day after he was dismissed.

“My late father used a phrase sparingly but impactfully to describe those he found to be the most dignified, respectful and worthy of admiration,” McDonough said. “He would say they had ‘class à la mode.’ That perfectly describes the Wirtz family and the Chicago Blackhawks.”

The 66-year-old McDonough provided no clues on the circumstances surrounding his surprise departure. In the team statement announcing the change on Monday, Rocky Wirtz pointed to the coronavirus crisis and the suspension of the NHL season as an opportunity to assess the team’s direction.

McDonough was president of baseball’s Chicago Cubs before he was hired by Wirtz in 2007. McDonough’s arrival was a key moment in the Blackhawks’ climb from one of the worst franchises in sports to the top of the NHL.

McDonough helped revamp the team’s business operations while star forwards Jonathan Toews and Patrick Kane powered Chicago to the Stanley Cup title in 2010, 2013 and 2015. While the business side of the franchise remains in good shape, the Blackhawks haven’t made the playoffs since 2017.

McDonough’s departure could lead to massive changes across the organization. Danny Wirtz, Rocky’s 43-year-old son and a vice president with the team, is replacing McDonough on an interim basis.

“I wish Danny Wirtz well in his new role, and I am confident the organization will have success in the search for a new president,” McDonough said in his statement.