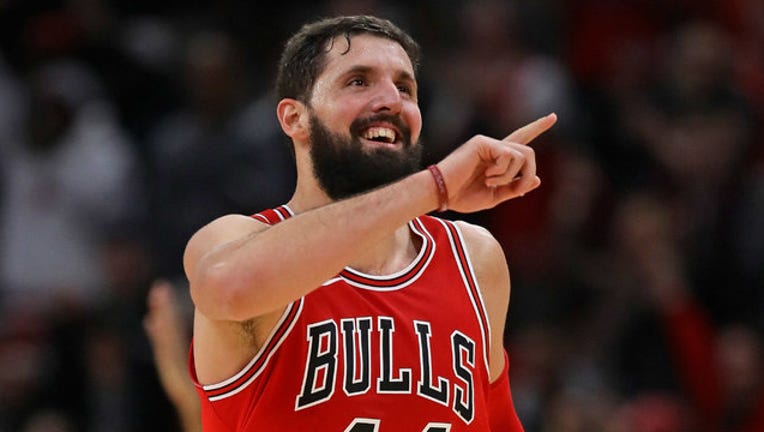 Nikola Mirotic celebrates as he runs down the court after hitting a 3 point shot late in the game against the Philadelphia 76ers at the United Center on December 18, 2017. The Bulls defeated the 76ers 117-115. (Jonathan Daniel/Getty Images)

CHICAGO (AP) -- Nikola Mirotic has turned into a matchup nightmare. Kris Dunn looks like one of the NBA's most promising young point guards, and Bobby Portis and David Nwaba have provided a spark off the bench.

For a team that was supposed to be tanking this year, the Chicago Bulls look awfully competitive all of a sudden.

Led by Mirotic and Dunn, Chicago beat Philadelphia 117-115 on Monday night for its sixth consecutive victory on the heels of a 10-game slide -- a turnaround unlike any other in NBA history. The Bulls are perfect since Mirotic returned Dec. 8 after missing the start of the season with facial fractures following a fight with Portis.

This was not exactly the plan for Chicago after it went 41-41 last season and lost to Boston in the first round of the playoffs. All-Star Jimmy Butler was traded to Minnesota in June and Dwyane Wade, Rajon Rondo and Taj Gibson departed for greener pastures as Chicago embarked on a potentially painful rebuilding process.

Then Mirotic and Portis got into an altercation during practice on Oct. 17, and the Bulls became the laughingstock of the league. Portis was suspended for eight games and Mirotic needed weeks to recover from his injuries.

For a while, no one was quite sure whether Mirotic and Portis would be able to play together again. But they figured it out over time, validating Chicago's patient approach to the situation.

"I was very, very excited to start the season," Mirotic said. "Putting in all the work and gaining 20 pounds of (muscle) on my body, but sometimes things just happen (for) a reason. You never know why is the reason. Even maybe could be looking very bad in the beginning, but at the end of the day, now, I'm not saying it's good, but just trying to be positive out there, making my life simple in the game."

The 26-year-old Mirotic, who re-signed with Chicago in September on a two-year contract that could pay as much as $27 million, was maddeningly inconsistent during his first three years in the league. But he has been an absolute terror since coming back from the preseason fight, averaging 20.3 points and 7.3 rebounds during the streak.

He has been more aggressive after often deferring to his teammates early in his career. Offseason weightlifting work has helped with his low-post game and defense.

"He's a real threat, you have to know where he is," Philadelphia coach Brett Brown said. "I think when we study, what does a modern-day player look like, it looks like him. It looks like him. Big athlete, got a bounce, can make shots, and seemingly he's been one of the key things to connect the dots."

The 6-foot-10 Mirotic can shoot over smaller players or take the ball to the basket when he is guarded by a big man. With Dunn, Portis and rookie Lauri Markkanen creating their own matchup problems, the Bulls are becoming a tough team to defend.

Chicago (9-20) had seven players score in double figures in the victory over Philadelphia. It is averaging 111 points during its win streak.

"These guys have made leaps and bounds from where we were as far as making plays down the stretch and going out and playing with confidence when it matters most," coach Fred Hoiberg said.

Dunn, who came over in the Butler deal, hit a couple of big shots down the stretch against Philadelphia and finished with 22 points and six assists. He has scored in double figures in a career-best eight straight games.

Portis and Nwaba, who missed a chunk of the season with a sprained right ankle, have had their moments as well. Portis scored a career-high 27 points and grabbed 12 rebounds in Friday night's 115-109 victory at Milwaukee, and Nwaba has scored in double figures in six of his last seven games.

"David is doing a lot of little things for this team," Hoiberg said. "We missed him a lot when he was out of the lineup."

Next up for Hoiberg's team is a visit from lowly Orlando, losers of five in a row and six of seven. Then Chicago hits the road for a challenging three-game trip to Cleveland, Boston and Milwaukee, and Zach LaVine could make his Bulls debut next month in his return from knee surgery.

After looking completely lost at times during a 3-20 start, there is suddenly reason for hope in Chicago.

"It's still about taking positive steps and our team has done that in these past couple weeks," Hoiberg said.