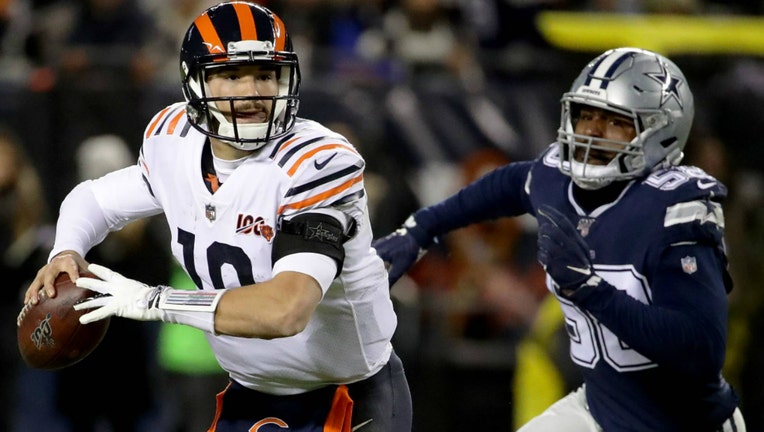 Quarterback Mitchell Trubisky #10 of the Chicago Bears scrambles against defensive end Robert Quinn #58 of the Dallas Cowboys during the game at Soldier Field on December 05, 2019 in Chicago, Illinois. (Photo by Jonathan Daniel/Getty Images)

LAKE FOREST - The Chicago Bears hadn't run well or passed effectively much of the season against better defenses before quarterback Mitchell Trubisky did both with surprising effectiveness Thursday night in a 31-24 win over the NFC East-leading Dallas Cowboys.

The Bears hope a mobile Trubisky is just as effective at Green Bay on Dec. 15. They're aiming for a shot at the final NFC wild-card spot.

"Just taking what the defense gives us," Trubisky said. "Just doing my part."

"I would say that schematically there might have been a few things that we changed in some of that," Nagy said. "And then just some of the things that they were giving us as well."

Trubisky has a passer rating of 99.0, with seven touchdowns, four interceptions and 860 yards on 70 percent completions in leading the Bears (7-6) to three straight victories.

"You see someone work so hard, day in and day out," running back David Montgomery said. "You can see it paying off. A lot of people kind of jumped ship on him."

Trubisky had run only 15 times in his first nine games. But in his last three has run 21 times, including 10 Thursday night for a season-high 63 yards. He only had 80 rushing yards the entire season going into the game, after gaining 421 in 2018.

Nagy thought Trubisky was especially effective running because Dallas's defensive linemen took themselves out of position.

"Trust me, they're not the only team that does that, but he understands that his legs are a weapon," Nagy said. "We don't want him to become a running back. We want him to be a quarterback that uses his legs, and I thought yesterday was a great example of that combination."

The running game overall has become more effective, even beyond Trubisky's runs. Montgomery averaged 3.3 yards a carry his first 11 games but had 4.69 and 4.3 yards a carry the last two. Against Dallas, he had his second-best game in the NFL with 86 yards on 20 carries.

The pass defense struggled once the game was out of reach for Dallas, allowing 224 yards passing in the fourth quarter.

Tight end J.P. Holtz was an afterthought when the Bears claimed him Sept. 11 after being waived by Washington. Since then they've lost tight ends Trey Burton and Adam Shaheen to season-ending injuries and tight end Ben Braunecker sat two straight games with a concussion. After Holtz had only two catches in his first 10 Bears games, he made three against Dallas for 56 yards and was a key blocker in igniting the running attack. Former practice squad tight end Jesper Horsted had four catches for 36 yards.

"They're new to the offense, let alone their skillset," Nagy said. "I think now we're kind of getting an idea what their strengths and weaknesses are, and we're trying to feed off their strengths."

Running back/receiver Tarik Cohen had six catches for only 24 yards against Dallas. In his last three games, he's averaged just 4.6 yards on 17 receptions. He has only 16 yards on six runs in his last two games.

Linebacker Roquan Smith has a pectoral injury of unknown severity. Nagy didn't know the full extent of the injury after the game or Friday, but didn't sound optimistic they'd have Smith available against Green Bay. ... Wide receiver Javon Wims injured his knee against Dallas.

Seven - the number of different receivers Trubisky completed passes to against Dallas. They'd been struggling getting passes to receivers beyond Allen Robinson and Anthony Miller.

The Bears play at Green Bay in a rematch of the NFL regular-season opener won 10-3 by the Packers. The Bears remain in the playoff chase, 1 1/2 games behind Minnesota for the final wild card. They play the Vikings on the road to close the regular season and have a tiebreaker edge currently from a 16-6 win. However, the Rams are still ahead of the Bears in the wild-card chase, too, and own a head-to-head tiebreaker thanks to a 17-7 win over Chicago.