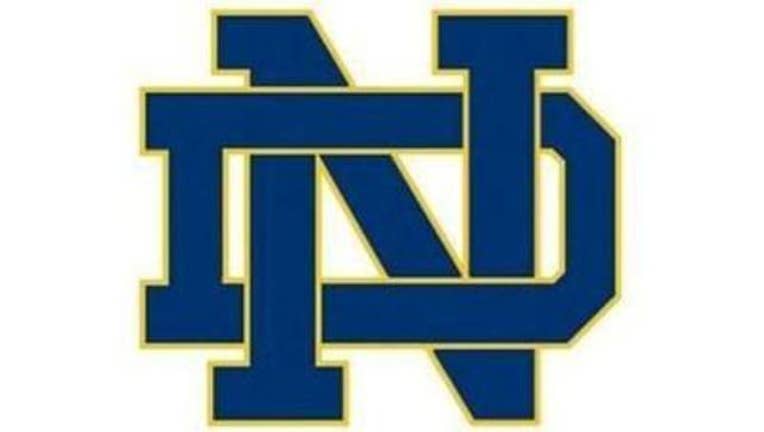 NEW YORK (AP) — Notre Dame coach Mike Brey walked off the court at Barclays Center and said with a big smile on his face, "God, I love Brooklyn."

As well he should after the Fighting Irish completed their second successful stretch in the borough, beating Northwestern 70-66 on Tuesday night in the championship game of the Legends Classic.

In March, Notre Dame beat Michigan and Stephen F. Austin here to advance in the NCAA Tournament, where the Fighting Irish went on to the Elite Eight.

"We got karma," Brey said. "I said to (ESPN's) Doris Burke when I went for the interview, Brooklyn magic still. That had a crazy finish like the Stephen F. Austin game. We were down to Michigan. I love the fact that we're coming back for the ACC Tournament. I'm sure going to try and stir up the ghosts again in March. We're comfortable here and I don't want to overanalyze it."

The Atlantic Coast Conference Tournament will be held in Barclays Center for the first time this season.

Northwestern had a 66-65 lead with 39 seconds to play after a drive by Bryant McIntosh. Notre Dame's Steve Vasturia missed a jumper, but Northwestern threw the ball away on an inbounds pass, setting the stage for Farrell.

He drove the lane and was knocked to the floor as the ball went in. He sat on the court, looked at the photographers and stuck his tongue out before being mobbed by teammates.

The Wildcats still had a chance, but McIntosh missed a drive with 4 seconds left and it was Farrell who grabbed the rebound and was fouled.

"I wasn't really sure where they were throwing the ball because me and Steve were both right around there. V.J. (Beachem) was going to take it. He just kind of threw it to me at the top of the key," Farrell said. "I don't know who was on me, but I had a mismatch. There was a big on me. So I just wanted to get in the lane and try to make a play. Ultimately, I end up making a good play. It was just kind of surreal in the moment, just trying to make a play and I end up falling."

He was asked about what happened next as he sat on the court.

"Just having fun," the New Jersey native said. "Just being back home and being in this building. It's a lot of fun playing with these guys."

Farrell, the tournament MVP, and Vasturia both had 18 points for the Fighting Irish (5-0). Bonzie Colson added 13 points and 11 rebounds.

"This has been blossoming since March, watching him through the summer," Brey said of Farrell. "I don't think the staff or his teammates are shocked. There's an edge about him, a fearlessness about him and I'm just so thrilled that he's come out of here a really confident guy and really knows he's got the keys to the car."

Scottie Lindsey had 18 points for the Wildcats (3-2), and Vic Law added 14 points with seven rebounds. McIntosh finished with seven points on 3-for-18 shooting.

Nathan Taphorn, who threw the ball away before Farrell's three-point play, had 12 points on 4-of-5 shooting from 3-point range.

Notre Dame, which beat Colorado 89-83 in the semifinals, led by 12 early in the second half. Northwestern, which beat No. 22 Texas 77-58 in the semifinals, chipped away and was finally able to make some headway when the Fighting Irish went more than 4 minutes without scoring. During the drought, Taphorn hit two 3s and Law added another to make it 55-54 with 11:04 to play.

"They know how to win. They're a tough team. They're well-coached," Northwestern coach Chris Collins said. "I have great respect for who they are and the plays they made down the stretch. We had our chances. All that being said, we had a one-point lead and the ball with 20 seconds to go. We weren't able to close the deal."

And that was because of the long inbounds pass that went out of bounds.

"Taphorn's a kid that I trust as an inbounder," Collins said. "He's kind of our specialist. He's done that his whole career."

Northwestern finished 11 of 18 from 3-point range, while the Fighting Irish were 8 of 18. The Wildcats had a 37-27 rebounding advantage.

Notre Dame: The Fighting Irish have plenty of experience back from last season's team that reached the Elite Eight and they will need that as they approach the Atlantic Coast Conference season. They were picked seventh in the preseason ACC poll.

Northwestern: The Wildcats have had two tough losses this season but hope to make a run at their first NCAA Tournament bid.

When Brey was an assistant to Mike Krzyzewski at Duke he handled the recruiting of Collins and was successful. While at Duke, Collins played in three NCAA Tournaments and one Final Four.

Notre Dame: The Fighting Irish return home for games against Chicago State on Saturday and Iowa next Tuesday in the ACC-Big Ten Challenge,

Northwestern: The Wildcats play Bryant at home on Friday and then Wake Forest in the ACC-Big Ten Challenge on Monday.