SOUTH BEND, Ind. - Notre Dame quarterback Tyler Buchner is expected to miss the rest of the regular season with an injury to his non-throwing shoulder that will require surgery.

Fighting Irish coach Marcus Freeman said Monday that Buchner has a severe AC joint sprain in his left shoulder. Buchner was injured in the fourth quarter of Notre Dame's surprising loss to Marshall over the weekend and was scheduled to have surgery Tuesday.

"The expected recovery time is about four months," Freeman said. "We can all do that math. That probably puts us somewhere in mid-January."

Drew Pyne, who came off the bench after Buchner was hurt, was listed as the starter on Notre Dame’s depth chart for this Saturday’s home game against California. Against Marshall, he went 3 for 6 with a touchdown pass and an interception.

In August, Pyne entered training camp competing for the starting quarterback position but lost the job to Buchner after practice No. 7. 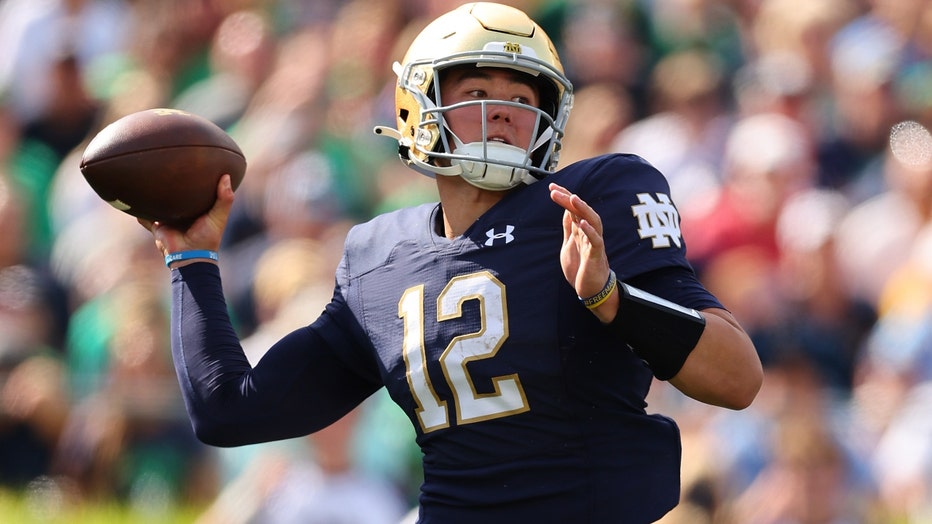 Tyler Buchner of the Notre Dame Fighting Irish throws a pass against the Marshall Thundering Herd during the first half at Notre Dame Stadium on September 10, 2022 in South Bend, Indiana. (Michael Reaves/Getty Images / Getty Images)

"As I said when we addressed the quarterback competition in fall camp, I had the utmost confidence in both of those guys to be able to lead our offense and lead our football team," Freeman said. "We are still very positive and optimistic about our future moving forward."

Pyne is 20 for 39 for 256 yards, three touchdowns and an interception in five career games. That includes a relief appearance against No. 18 Wisconsin in 2021, where Pyne threw a fourth-quarter touchdown in a late-game comeback victory.

Notre Dame is off to an 0-2 under first-year coach Freeman after beginning this season ranked fifth in the country.

Now Pyne is charged with orchestrating an in-season turnaround.

"You're thrust into a leadership position when you’re the quarterback," Freeman said. "You want people to be able to follow you, not just through your actions, but through your words and who you are as a leader. He’s a natural leader. He has a lot of the natural QB traits that you’re looking for."

Notre Dame is trying to avoid going 0-3 for the first time since 2007.

With Buchner at quarterback, the Irish offense struggled in two games this season. Notre Dame ranks No. 117 among FBS teams in scoring offense with 15.5 points per game.

In addition to throwing for 378 yards and two interceptions, Buchner was Notre Dame’s leading rusher with 24 carries for 62 yards and two touchdowns.

Even with Buchner’s wheels, the Irish are 110th in rushing offense with 103 yards per game.

Freeman conceded Pyne doesn’t possess Buchner’s speed, but Pyne will still be called upon to run the ball.

"I don’t see the offense changing an extreme amount," Freeman said. "We’re still going to be able to do some of the QB runs we did with Tyler. (With the) passing game, we’ll continue to enhance it and figure out more ways to be consistent in it and put him in a position to hopefully have more completions."