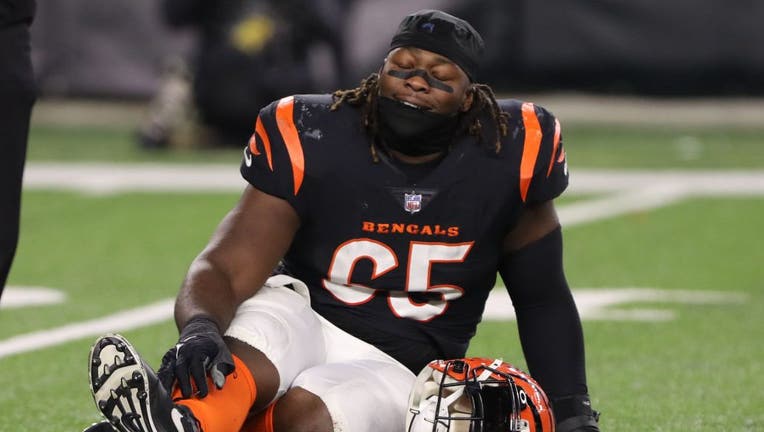 Cincinnati Bengals defensive tackle Larry Ogunjobi (65) sits on the field during the Wild Card game against the Las Vegas Raiders and the Cincinnati Bengals on January 15, 2022, at Paul Brown Stadium in Cincinnati, OH. (Photo by Ian Johnson/Icon Spor

Poles announced the situation in a statement Friday when the former Cincinnati Bengals player was set to appear for an introductory news conference at Halas Hall.

"As I said before, Larry Ogunjobi embodies everything we are looking for in a Bear," Poles said. "He is a special person and player. During the league’s negotiating window earlier this week we agreed to terms with him, subject to him passing a physical here.

"After a standard and thorough physical and medical review with Larry yesterday afternoon, our medical team deemed him to have failed his physical and therefore, unfortunately, we are not signing him today. This is difficult and it is emotional for everyone involved, but ultimately is what is in the best interest of protecting the Chicago Bears."

Ogunjobi injured his right foot during the Bengals’ wild-card victory over the Las Vegas Raiders and was lost for the remainder of the playoffs.

Ogunjobi was the most established player the Bears signed in free agency so far, as they tried to rebuild their defensive line in a 4-3 approach. According to an NFL Network report, the Bears agreed initially to pay him $40.5 million over three years.

What Poles did get accomplished was signing help at several other positions, including a replacement for Ogunjobi.Rodgers and the Green Bay Packers.

Fifth-year defensive tackle Justin Jones from the Los Angeles Chargers signed a two-year deal with the Bears, while the team finalized a contract with Green Bay Packers wide receiver Equanimeous St. Brown. Earlier in the week, they had announced the signings of Packers center/guard Lucas Patrick and Raiders linebacker Nicholas Morrow.

Jones, a third-round draft pick by the Chargers, said he planned to sign with the Indianapolis Colts until he received a phone call late Thursday from Bears coach Matt Eberflus.

Jones knows Ogunjobi and has worked out with him in the past.

"What happened with Larry is terrible," Jones said. "He’s a great guy. Coming from Cincinnati, he played with one of my best friends, B.J. Hill."