PITTSBURGH - No extended March stay for Loyola Chicago and Sister Jean this time.

Not with Ohio State taking away every inch of open space. Not with E.J. Liddell creating a bit of his own with each pull-up jumper. Not with the seventh-seeded Buckeyes showing that when healthy, they can make every trip down the floor for their opponent a frustrating mess.

E.J. Liddell scored 16 points, Big Ten Freshman of the Year Malaki Branham added 14 and Ohio State shut down the 10th-seeded Ramblers from start to finish, winning 54-41 in the first round of the NCAA Tournament on Friday.

"We knew we were in for a rock fight, and that’s very much what it was," Ohio State coach Chris Holtmann said, calling it "the best defensive performance we’ve really had in a couple years."

Certainly, it’s the best the Ramblers have faced in a while. Loyola’s 41 points were a season low and the program’s fewest since scoring 39 against Indiana State in 2020. After hearing repeatedly about the Ramblers’ smothering defense, the Buckeyes provided some of their own.

"We love that type of challenge, and we just have to respond," said forward Kyle Young, who had nine points and seven rebounds in 34 minutes in his return from a concussion that cost him several games. "So it was just about who is going to play more physical and tougher with 50/50 balls and things like that."

Braden Norris the Ramblers with 14 points but star Lucas Williamson endured perhaps his worst game of the season. The winningest player in program history finished with four points on 1-of-10 shooting and committed three turnovers as Loyola fell in the first round after reaching the Sweet 16 last season and the Final Four in 2018.

"I mean, I’m disappointed in myself," Williamson said. "I don’t feel like I played to the standard that I put myself at. But, yeah, I mean, like (coach) Drew (Valentine) said, kind of just at a loss for words. Kind of just stunned right now." 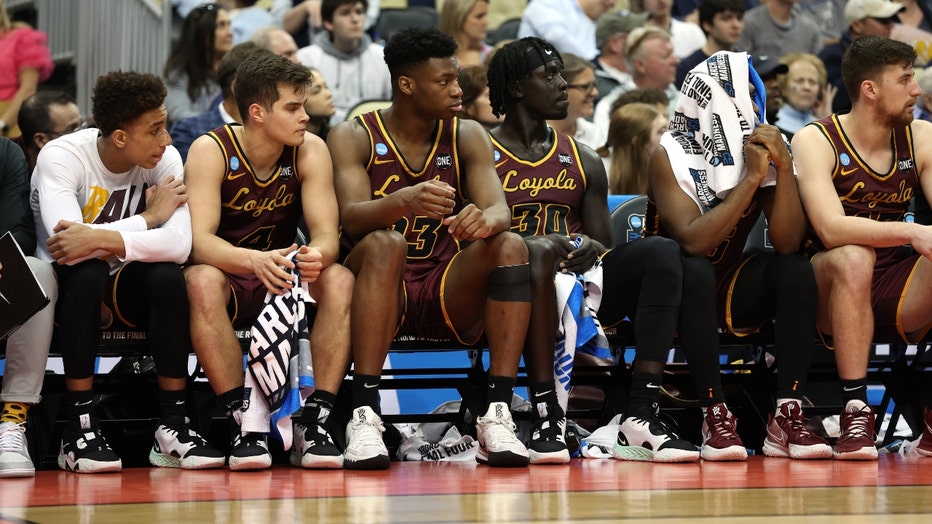 Loyola-Chicago Ramblers players look on from the bench late during the second half against the Ohio State Buckeyes in the first round game of the 2022 NCAA Men's Basketball Tournament at PPG PAINTS Arena on March 18, 2022 in Pittsburgh, Pennsylvania. (Rob Carr/Getty Images / Getty Images)

Sister Jean, Loyola’s 102-year-old chaplain, led the Ramblers in a pregame prayer and took in the school’s third NCAA appearance in five years from the mezzanine but could only watch as Loyola — listed as a slight favorite by FanDuel Sportsbook, a nod to the program’s rise — fumbled away an opportunity to further cement its status as an emerging mid-major power.

Ohio State came in having lost four of five games, including a baffling setback to lowly Penn State in the Big Ten tournament last week. A year ago, Ohio State came in as a two seed only to get ambushed by 15th-seeded Oral Roberts in the opening round. Not this time.

Liddell endured a rocky first half while getting hounded by Williamson but collected himself after the break, hitting a series of mid-range jumpers. The 6-foot-7 bruiser’s go-to move was using one of his shoulders to nudge a Rambler out of the way before rising up into the void.

"We played with an edge tonight, played like the underdogs," Liddell said. "We’ve got to keep playing like that because people have been counting us out big time. We’ve got to have that same mindset next game."

The Ramblers were in fact a popular pick to knock off the Buckeyes, but Ohio State’s size and relentlessness were too much.

At one point, Valentine grew so animated his gum flew out of his mouth as he implored his team for more effort.

The Ramblers’ effort wasn’t the issue. Execution, however, was another matter as Loyola ended its stint in the Missouri Valley Conference — the Jesuit school located along Lake Michigan is heading to the Atlantic 10 next fall — with a thud. It shows how far the Ramblers have come that a first-round exit is considered a disappointment.

"I think the main thing that I want to focus on is the program’s in a lot better spot than it was when a lot of these guys got here five years ago," Valentine said. "So I’m proud of our group, but obviously today we really struggled offensively, making shots, free throws. Thought we had too many turnovers. I thought defensively we were solid at times, but probably fought a little too much."