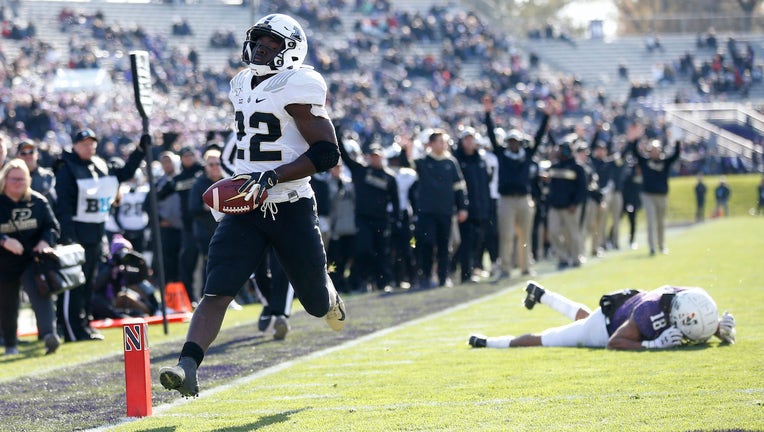 King Doerue #22 of the Purdue Boilermakers avoids a tackle from Cameron Ruiz #18 of the Northwestern Wildcats to score a touchdown during the second quarter at Ryan Field on November 09, 2019 in Evanston, Illinois. (Justin Casterline/Getty Images)

David Bell made 14 catches for 115 yards and a score as the Boilermakers rallied from down 14-0 in the first quarter. Northwestern lost its seventh straight.

Northwestern (1-8, 0-7 Big Ten) scored more points than in its four previous games combined, as receiver-turned-tailback Kyric McGowan rushed for 146 yards and a score.

O’Connell struggled in the first half but helped Purdue (4-6, 3-4 Big Ten) outscore Northwestern 17-6 after halftime. The Wildcats committed two pass interference penalties on the final drive to keep Purdue in it.

McGowan lined up in the backfield and burst up the middle for a 79-yard touchdown on Northwestern’s second play from scrimmage. Aidan Smith found a diving Jace James from 16 yards out to put the Wildcats up 14-0 on the next drive, and Northwestern added a safety.

Running back King Doerue bounced outside for a 12-yard score in the second quarter. Then O’Connell floated touchdown passes over the defense to David Bell and Amad Anderson in the third.

Purdue: The Boilermakers have a tough road remaining with games at Wisconsin and at home against Indiana, but they can still qualify for a bowl game.

Northwestern: A season marked by lifeless offense will end in a last-place finish in the Big Ten West. It’ll be the Wildcats’ worst season since at least 2006, coach Pat Fitzgerald’s first season at the helm.

Purdue: Off next week before a trip to Wisconsin on Nov. 23.

Northwestern: Hosts Massachusetts in a break from Big Ten play.