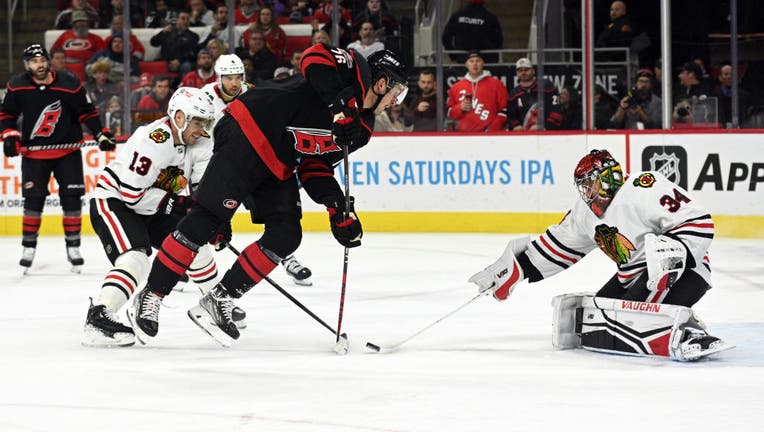 RALEIGH, N.C. - Antti Raanta made 24 saves for his first shutout since March and the Carolina Hurricanes beat the Chicago Blackhawks 3-0 on Tuesday night for their ninth consecutive victory.

Raanta, making his third consecutive start, had his 16th career shutout. He faced only seven shots in both the first and third periods.

The Blackhawks, who were aiming for back-to-back wins for the first time since late October, have lost nine of their last 10. They’ve been shut out in three of those defeats.

Chicago goalie Petr Mrazek made 46 saves against one of his former teams.

The Hurricanes put 23 shots on goal in the first period, a season high for any period. They scored twice in the opening nine minutes.

Necas battled for space in front of the net and was rewarded by getting enough stick on the puck to put it in the goal for his 15th of the season. He had 14 goals in 72 regular-season games a season ago.

Fast, who picked up his third goal in two games and fifth of the season, benefitted when the puck when in off Chicago defenseman Connor Murphy.

Paul Stastny picked up an assist on Carolina’s first goal. It came on his 37th birthday. He has played 11 games on his birthday in his NHL career, collecting seven points in those outings. … The Hurricanes hadn’t reached the 23-shot level in a first period since April 17, 2021, vs. Nashville.