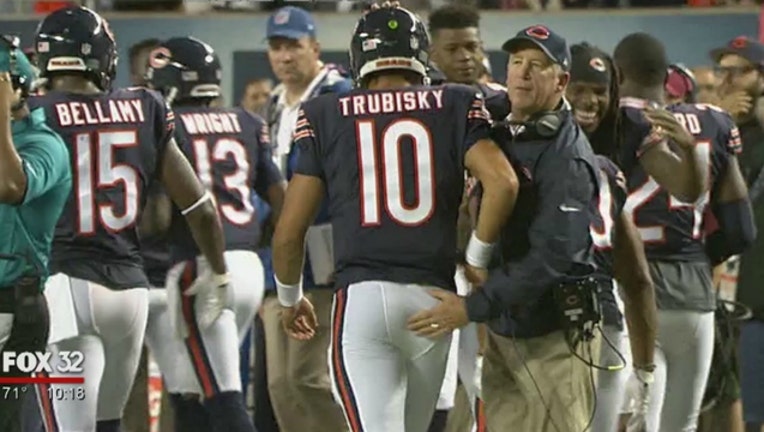 BALTIMORE (AP) - Plenty of crowd noise, a variety of blitzes and a close-up encounter with Terrell Suggs.

That's what Chicago Bears quarterback Mitchell Trubisky can expect Sunday when he makes his first NFL road start against the Baltimore Ravens.

Last month, DeShone Kizer made his road debut as Cleveland's starting quarterback in Baltimore. The rookie left after four series with a migraine headache, returned in the third quarter and was guilty of four turnovers in a 24-10 defeat.

Suggs had one of Baltimore's three sacks that day, and the game plan this week is for more of the same.

Trubisky last Monday night became the first rookie to start at quarterback for the Bears since 2005. He completed 12 for 25 passes for 128 yards and a touchdown, but threw a crucial interception in the closing minutes of a 20-17 loss to Minnesota.

Trubisky tried to hit Zach Miller on the run along the right sideline after the Bears got the ball on their 10. Instead, the Vikings' Harrison Smith reached up and hauled it in.

Now, Trubisky and the Bears (1-4) go up against the turnover-hungry Ravens (3-2), who have nine interceptions in five games and last week returned a fumble for a touchdown in a 30-17 win over Oakland.

"It was nice to play at home in Soldier Field, but going to Baltimore will be a good challenge for us," Trubisky said. "Just got to get ready for a hostile crowd and everything that comes with that."

Some things to know about the first matchup between the Bears and Ravens since 2013 (when Trubisky was a redshirt freshman at North Carolina):

TREVATHAN RETURNS: The Bears get a boost at inside linebacker with Danny Trevathan back from a one-game suspension. Trevathan's punishment stemmed from a hit with his helmet to Packers receiver Davante Adams at Green Bay on Sept. 28. Adams was taken off the field on a stretcher.

Trevathan said the helmet hit was not intentional. He said he has been in touch with Adams, adding "we're good."

"I wasn't trying to put my head down there to hurt the guy," Trevathan said. "I was just trying to make a play."

FLACCO ON TARGET: In contrast to Trubisky, Ravens quarterback Joe Flacco is in his 10th season and owns a Super Bowl ring.

All that seasoning is no guarantee of perfection. Flacco was struggling this season before getting on track against the Raiders, going 19 of 26 for 222 yards with no interceptions or sacks.

"I definitely think it's going to continue to carry over," Flacco said. "We're working hard in there, and guys are definitely ready to go and want to be involved and make a splash."

HOMECOMING: Former Ravens linebacker Pernell McPhee returns to Baltimore, where he spent the first four seasons of his career before joining the Bears as a free agent in 2015.

"I'm just looking to come help my team get a win right now, and focus on that," he said. "Not trying to make this about me and my emotions."

A sack, however, would surely be nice.

"I would love to hit Joe Flacco," McPhee said. "I hope he lets me hit him one time - just one time."

RESPECT: There was no trash talking from Suggs this week. Baltimore's career sack leader will hope to add to that total Sunday, but he spoke respectfully about Trubisky.

"You can't take anything or anybody for granted," said Suggs, who turned 35 Wednesday. "He is a problem for us. We accept the challenge, just like he does."

Knowing that Trubisky is mobile in the pocket, Suggs noted: "He is definitely one of those quarterbacks that can extend plays with his feet. We are taking all of that into account."

HOME-FIELD ADVANTAGE: The home team has won every game in this series, with the Bears holding a 3-2 lead. The Ravens will be counting on their crowd to make life difficult for Trubisky, which could lead to another win at home.

"We have a very football savvy fan base, and when they get in that stadium they do what they can to affect the game, which is very valuable for us," coach John Harbaugh said.