He celebrated by passing around credit for the accomplishment.

Josi had a goal and an assist, and the Predators handed Chicago its eighth straight loss with a 4-2 victory over the Blackhawks.

Thomas Novak, Matt Duchene and Nino Niederreiter also scored as Nashville earned its second straight win since a six-game slide. Juuse Saros made 37 stops, including a terrific right pad save on Patrick Kane with about 16 minutes left.

Josi's two points gave him 567 for his 12-year career, one more than David Legwand for the top spot on the franchise list. The 32-year-old defenseman has seven goals and 18 assists in 31 games this season.

"I think it's something I never dreamed of obviously when you first start in the NHL," Josi said. "So many people that put a lot of trust in me, so many people I'm thankful for — teammates have been here for so long, staff. So yeah, it's definitely a huge honor." 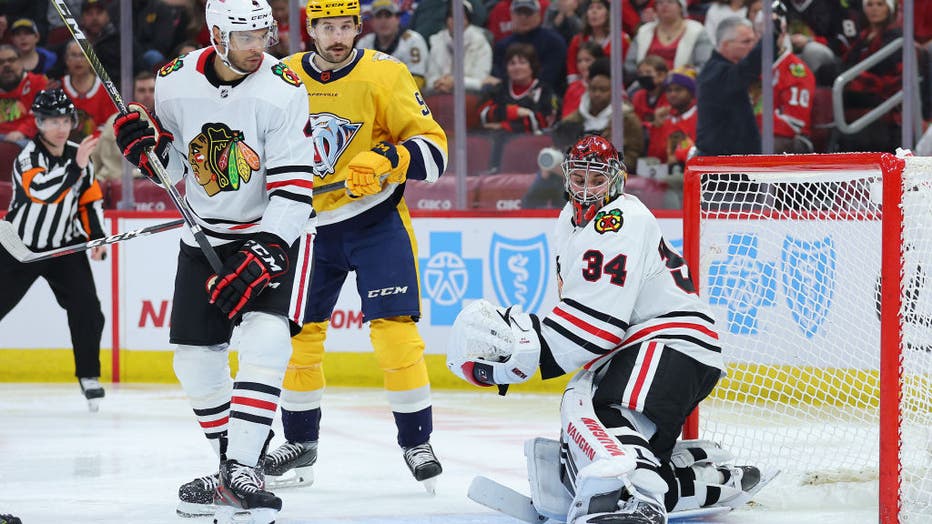 CHICAGO, ILLINOIS - DECEMBER 21: Petr Mrazek #34 of the Chicago Blackhawks reacts after allowing a goal by Roman Josi #59 of the Nashville Predators during the third period at United Center on December 21, 2022 in Chicago, Illinois. (Photo by Michael

Chicago dropped to 3-18-4 in its last 25 games. It has been outscored 35-9 during its eight-game slide, matching its longest losing streak of the season.

Connor Murphy and MacKenzie Entwistle scored for the last-place Blackhawks, and Petr Mrazek made 33 saves.

Chicago led 2-1 before Duchene scored his ninth goal with 5 seconds left in the second period. Mattias Ekholm found a streaking Duchene on the side of the net for an easy one-timer.

"That goal, it hurts, it stings," first-year Blackhawks coach Luke Richardson said. "But I thought we played pretty good in the second half of the second period offensively."

Nashville went ahead to stay when Josi converted a backhand 1:27 into the third. Josi then got his record-breaking point when he assisted on Novak's power-play goal at 6:09.

"What an accomplishment by him," said Novak, who scored his second career goal in his second game of the season with the Predators. "He's just an outstanding player."

Chicago went 0 for 4 on the power play.

Nashville jumped in front when Niederreiter scored 9:23 into the first period, sending a shot from the high slot past Mrazek on the goaltender's glove side. It was Niederreiter's 11th goal of the season.

Nashville forward Tanner Jeannot then received a double minor for a high stick to the face of Chicago defenseman Jake McCabe. But the Blackhawks came up empty on the ensuing power play, and McCabe never returned to the game.

"He got a few stitches and I think they just had to check out the eye," Richardson said. "They put some dye in to do all those tests and checks, and they came back tonight and said he should be fine going forward."

The Blackhawks got on the board in the second, scoring two goals in 37 seconds for their first lead since a 5-2 victory over the New York Rangers on Dec. 3.

Murphy got one when his long slap shot went off Nashville's Cody Glass on its way to the net at 16:03. Entwistle then made it 2-1 when his shot went off the stick and right leg of Predators defenseman Jeremy Lauzon before fluttering past Saros on the glove side.

Nashville defenseman Ryan McDonagh was activated from injured reserve and played in his first game since he was struck in the nose on a shot by Islanders defenseman Alexander Romanov on Dec. 2.

Blackhawks defenseman Isaak Phillips played in his first NHL game this season. He was recalled from the minors on Monday when defenseman Jarred Tinordi was placed on IR with a facial fracture.