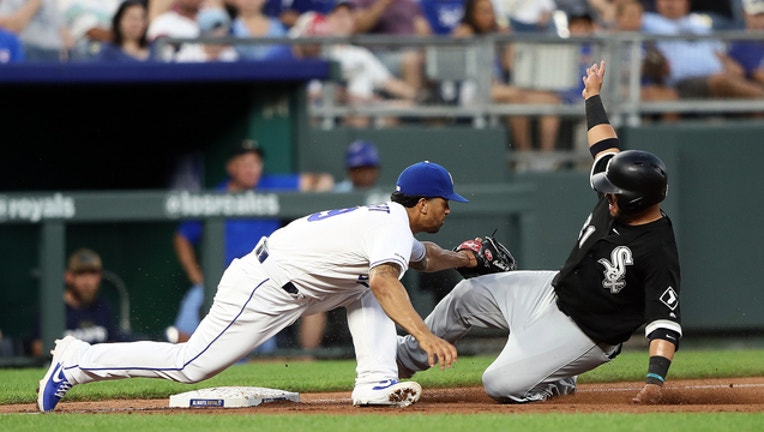 KANSAS CITY, Mo. (AP) - Danny Duffy bounced back after getting hit by a line drive that left him with numbness in his throwing hand in last start.

"I'm really thankful that nothing bad happened and went out there and was able to compete again five days later," Duffy said.

The left-hander had all three of his pitches working. He scattered six hits and struck out five in sending Chicago to its season-worst sixth straight loss. With a heat index well above 100 degrees for most of the game, Royals manager Ned Yost was careful not to overwork him.

"It was hot, it was humid and he was starting to labor. He was getting worn out," Yost said.

A.J. Reed hit a three-run homer, his first, with two outs in the ninth inning off Wily Peralta. Ian Kennedy entered the game and completed the one-out save, his 15th in 18 opportunities.

Ivan Nova (4-9) lasted just 4 2/3 innings and struggled with his command. He allowed six runs and six hits with five walks. After giving up two runs in the first inning, Nova retired 13 of the next 14 batters before running into trouble again in the fifth with two outs, allowing five straight batters to reach base, three by walks.

White Sox starters have struggled over the last three weeks, going 4-8 with a 5.11 ERA in the last 17 games. The last White Sox starter to throw more than six innings was Lucas Giolito on June 8.

Ryan Goins homered in his first major league game this season, a two-run shot into the Royals' bullpen in the sixth inning. That snapped a 15-inning scoring drought for the White Sox that dating to Monday's game.

The White Sox have scored just 18 runs in their last eight games and scored more than three runs for the first time since Independence Day. In six games since the All-Star break, Chicago has been outscored 44-12.

"We're going to keep playing; have to keep playing," White Sox manager Rick Renteria said. "That's the only thing left. If they keep battling like they did today towards the end, there's a little bit of the better life than we've seen over the last six days or whatever. There's still so much baseball left. We've got to get back on track."

The Royals have come roaring out of the All-Star break, winning five of six, for their best stretch of the season. Kansas City has also won consecutive series for the first time this season.

"It's awesome, man. It's great," Duffy said. "We're getting to that point where we're gaining confidence again. Guys are playing great. The offense is doing a great job of going up there every at-bat and having good at-bats and we're just kind of following them. As a staff, just kind of take the baton and run with it."

Soler and Lopez also slapped RBI singles in the first inning, the fourth time in six games since the All-Star break Kansas City has scored in the opening frame.

Whit Merrifield had three more hits and was on base five times, extending his hitting streak to 15 games. He also increased his league-leading hit total to 128. During the streak, Merrifield is hitting .410 (25-61).

"Another great day," Yost said. "Three hits, but it's just what he's been doing. You know, he's been as consistent as anyone in major league baseball the last couple years with his performance day-in and day-out."