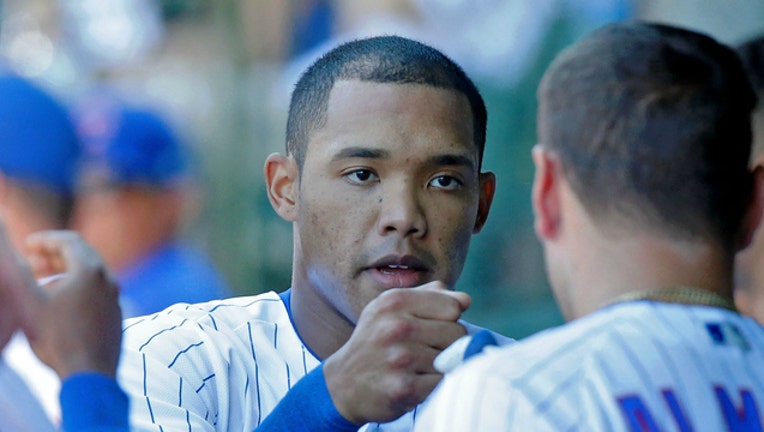 CHICAGO (AP) - Addison Russell and the Chicago Cubs don't believe the 2016 All-Star has become a completely changed man since his ex-wife accused him of physical and emotional abuse.

They do believe he's made positive strides, and with the Cubs needing an infielder for a depleted roster, Russell has been deemed the best option available.

Russell rejoined the surging Cubs on Wednesday after completing a 40-game suspension for violating Major League Baseball's domestic violence policy and spending extra time in the minors to get ready.

The Cubs recalled Russell from Triple-A Iowa, then started him at second base Wednesday night and in the eighth spot in the batting order against Miami. Russell was eligible to rejoin the team May 3 against St. Louis at Wrigley Field, but the organization opted to give him more time with the minor league club.

"This is not a finish line," Cubs President of Baseball Operations Theo Esptein said. "This does not represent the end of the road or an accomplishment in any way, but there has been progress."

Russell received a mix of polite applause and discernable boos from the Wrigley Field crowd when he walked to the plate in the third. The boos picked up after Russell struck out looking against Jose Ureña.

The Cubs had originally planned to recall Russell next week but moved that up after infielder/outfielder Ben Zobrist went on the restricted list Wednesday to take an indefinite leave for undisclosed personal matters. Infielder Daniel Descalso remains limited to pinch hitting because of a sore left ankle.

The 25-year-old Russell was suspended last fall after a series of allegations made by ex-wife Melisa Reidy. He said in February that he was accountable for his past actions and apologized for "the hurt and the pain" he caused.

Russell was working out in Arizona, playing in extended spring training games and meeting with a counselor twice a week before joining Iowa in late April. He batted .222 (10 for 45) with two doubles, three home runs and 13 RBIs in 12 games for Iowa this season.

Russell hadn't played for the Cubs since Sept. 19. The suspension covered the final 12 games in 2018 and the first 28 this year.

Epstein said Russell had not only been compliant with terms set out by the team and Major League Baseball, but continues to work with a counselor in what will be a long-term and possibly lifelong process.

Russell believes he's ready to help Cubs on the field immediately, but realizes more is involved than on-field performance.

"I've just improved with overall better relationships and better communication with my teammates, family and friends. Overall, I'm a better person. I'm happy I have this second opportunity and I'm looking forward and still improving as a person."

Epstein said the Cubs are not only monitoring Russell, but talking to people in his life about his behavior. That includes Reidy, who has said she supports Chicago's decision to give Russell another opportunity.

Manager Joe Maddon said he welcomed Russell back with a hug. Even if fans don't embrace him with open arms, Russell stressed he's sincere.

"I don't think I'm a good actor, but it's something that I worked really hard for," Russell said. "I don't think you can fake what's really true in your heart and what's true in my heart is to be a better person and continue to get better.

"And I can help out with that from a baseball standpoint."

Russell was once considered among baseball's top young infielders. He helped the Cubs win the World Series three years ago, batting .238 with 21 homers and 95 RBIs in 151 games as the team snapped a 108-year championship drought. The Cubs faced criticism for retaining Russell after his suspension.

Javier Baez moved from second base to shortstop following Russell's suspension and has been the Cubs' starting shortstop this year. Russell figures to backup Baez.

MLB began an investigation in 2017 after allegations against Russell first became public.

Reidy posted a photo on her Instagram account two years ago with a caption suggesting her husband of about 18 months had been unfaithful to her. In another post, a user described by Reidy as a close friend claimed Russell had "hit" his wife. The post was later deleted. Reidy declined to talk to MLB at the time because she decided it was not in her family's best interests, her attorney, Thomas Field, said last year. But MLB kept the case open.

Reidy published a blog post last September describing more detailed allegations, including years of physical and emotional abuse. Less than 12 hours later, MLB announced Russell had been put on leave under its domestic violence policy. And he accepted the suspension on Oct. 3.