Scottie Pippen suggested on Monday that Phil Jackson’s decision to draw a play for then-Chicago Bulls guard Toni Kukoc in the final seconds of a 1994 playoff game against the New York Knicks was racially motivated.

Pippen first drew the conclusion in an interview with GQ Magazine, saying the play was a "racial move" to give Kukoc some standing in the organization. Kukoc was a highly touted prospect from Europe at the time. Pippen famously refused to play those final seconds and Kukoc ended up nailing the final shot.

The moment was documented in last summer's "The Last Dance" documentary, which chronicled Michael Jordan and his final season with the Bulls.

Pippen was asked about the remark on "The Dan Patrick Show" on Monday.

"If you knew that Scottie Pippen had been with the Bulls from ’87, battled through the Pistons and every other team that we had to get to those three championships, wouldn’t you give Scottie Pippen one opportunity to get a last-second shot without Michael Jordan? Like, one year without Michael Jordan. Can I get one shot? I’m doing all the dirty work," Pippen said talking in the third person.

"Why would Toni, who’s a rookie, get the last-second shot and you put me out of bounds? That’s what I mean racial. Like, that was Scottie Pippen’s team. Scottie Pippen was on pace to be a MVP that year, right? Why would you put him in a position not to be successful? Why wouldn’t you put him into a position to succeed? Michael Jordan is not there. So, who’s next in line for you?" Pippen said.

Patrick told Pippen he was essentially calling the legendary coach a racist. To which Pippen replied, "I don’t got a problem with that."

When asked whether he thought Jackson was or is a racist, Pippen didn’t exactly paint a clear picture. 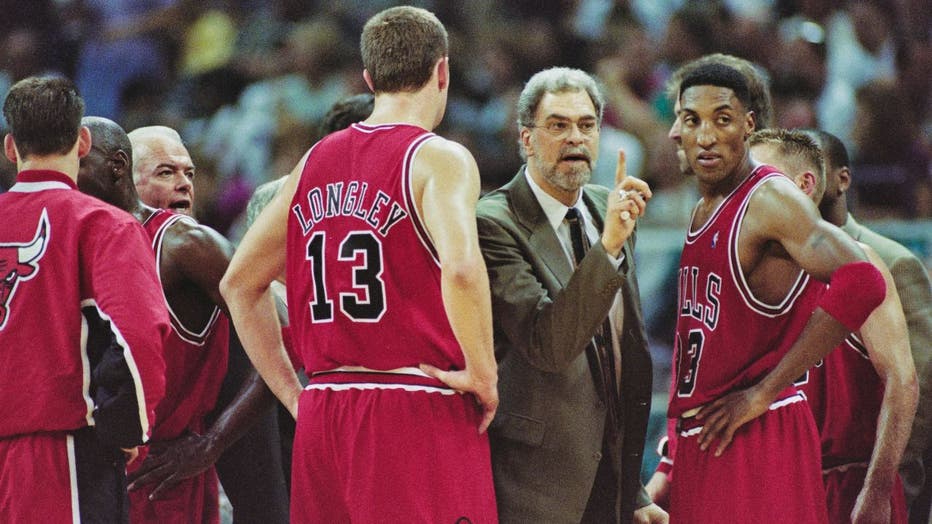 Phil Jackson, Head Coach for the Chicago Bulls talks with his players #33 Scottie Pippen and #13 Luc Longley during Game 4 of the NBA Eastern Conference Semi Final Playoff basketball game against the Charlotte Hornets on 10th May 1998 at the Charlott (Craig Jones/Allsport/Getty Images)

"Oh yeah, I mean do you remember Phil Jackson left the Lakers, went and wrote a book on Kobe Bryant and then came back and coached him? I mean who would do that? You name someone in professional sports that would do that. I think he probably exposed Kobe in a way that he shouldn’t have. You’re the head coach and you’re the guy that sits in the locker room and tells players this is a circle and everything stays within the circle because that’s what team is about but you as the head coach open it up and now you go out and try to belittle, at that time probably one of the greatest players in the game," Pippen said.

Patrick said it didn’t sound what Jackson did when he was coaching the Los Angeles Lakers a racist move, rather more disloyal. Pippen shot back.

"Well, that’s your way of putting it out and I have my way. I was in the locker room with him. I was in practices with him. You’re looking from afar," he said.

Pippen has raised eyebrows with his remarks from the GQ article. He rehashed his feud with Charles Barkley and started a new one with Kevin Durant.