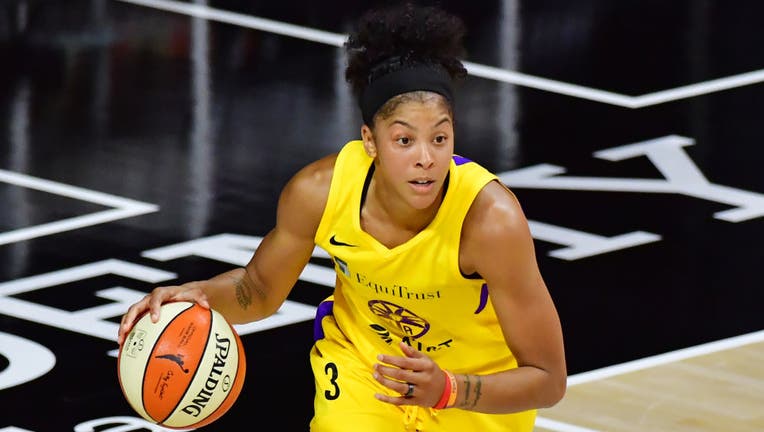 PALMETTO, FLORIDA - SEPTEMBER 17: Candace Parker #3 of the Los Angeles Sparks dribbles during the first half of Game One of their Second Round playoff against the Connecticut Sun at Feld Entertainment Center on September 17, 2020 in Palmetto, Florida

NEW YORK - Candace Parker talked about seeing her grandmother hold up the newspaper during their call, thrilled she is coming home to play for the Chicago Sky.

She mentioned the Bears and Bulls welcoming her in tweets, too. For a diehard fan of both teams growing up, that was pretty cool.

"I’m so excited to be home and I say that from the bottom of my heart," Parker said during a Zoom conference Tuesday. "I didn’t realize how amazing the Chicagoland area was with basketball in general until I went out in the world and I saw how truly special and how they really embrace their homegrown talent."

Parker, a two-time WNBA MVP, agreed to sign with Chicago last week and leave the Los Angeles Sparks after spending her first 13 seasons with them. The move was announced on Monday.

The Sky made the playoffs in 2020 for the second time in as many years under coach and general manager James Wade. They already had a solid nucleus with guards Courtney Vandersloot and Allie Quigley, as well as rising star Diamond DeShields. Now, they’re adding a "generational talent" as well as a leader, Wade said.

"When she decided, she told me even before, ‘If I come, I’m coming to ball,’" he said. "Automatically you know that, OK, this is what the expectations are. We want to win. And she wanted to win. That’s what it ultimately came down to. The fact that we felt we needed her to win was the most important thing. It was not just about the player she is, but even the person."

Parker won MVP awards in 2008 and 2013 and Defensive Player of the Year honors last season. She is a five-time All-Star and the Sparks’ all-time leader in scoring (5,684 points), blocks (545), and rebounds (2,902). She did all that after being drafted with the No. 1 overall pick in 2008, following a standout career at Tennessee under the late Hall of Famer Pat Summitt.

She has also played in Russia, China and Turkey.

"This orange ball has taken me all around the world," said Parker, who was in Atlanta for her job as an NBA analyst for TNT. "When you realize how special this little orange ball — and how many journeys and events and memories and relationships that you’ve established because of it, you really feel special."

Parker, who turns 35 in April, grew up in suburban Naperville. She said she started thinking about playing for the Sky a few weeks ago and would not have left Los Angeles for any other team.

"It just felt like the right decision coming home to Chicago and playing in front of the fans, the city, the people that I grew up in front of," Parker said. "(I) have obviously evolved, and a lot of it had to do with me living in Knoxville and me living in Los Angeles and Russia and Istanbul and China. I’ve had so much development since I left here."

Chicago Mayor Lori Lightfoot called it "a great day" for the city and "an incredibly important moment." She and her wife, Amy, have followed Parker since they saw her playing in a tournament her senior year at Naperville Central.

"One of the things I’m most excited about is what you being here will mean for our young girls," Lightfoot said. "Our 12-year-old daughter is beside herself with excitement. It’s going to mean a lot for girls all across the Chicago region, both on and off the court."

Parker vowed to be an active voice in the community, helping address racial inequities and encourage girls to participate in sports. She also mentioned her legacy. The way she sees it, playing for Chicago is part of it.

"The mayor saw me play when I was 17, 18 years old," Parker said. "That’s Chicago. I’ve taken that with me. I’ve taken that legacy with me across the world, to L.A. And now, I’m coming back with all those different experiences and values, everything that I’ve learned in my process. I hope it shows not just in the way that we carry ourselves on the court, but off. This community means so much to me."