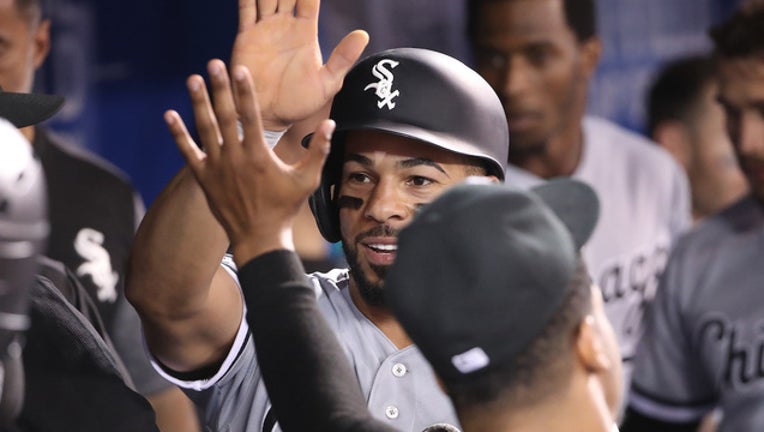 Leury Garcia of the Chicago White Sox is congratulated by teammates in the dugout after scoring a run in the third inning against the Toronto Blue Jays at Rogers Centre on May 11, 2019 in Toronto, Canada. (Tom Szczerbowski/Getty Images)

TORONTO (AP) - Blue Jays pitcher Marcus Stroman did not consider his angry reaction to being removed from a start to be a big deal. Neither did Toronto manager Charlie Montoyo.

Stroman was upset when replaced in yet another game where he received little run support, and the Blue Jays lost to the Chicago White Sox and Iván Nova 7-2 Saturday.

Stroman (1-6) exchanged words with Montoyo and pitching coach Pete Walker after he was replaced by Derek Law with runners at the corners in the seventh.

"That wasn't a disagreement. That was just me upset coming out," Stroman said. "I was just frustrated, I wanted to stay in the game. I don't think there's anything wrong that."

Montoyo insisted he had no problem with Stroman's reaction or his pitcher's competitive nature.

"Honestly, I really appreciate when guys get upset, like they don't want to come out of the game," Toronto's first-year manager said. "I don't want people to be happy when I take them out."

Stroman allowed four runs - three earned - and eight hits in 6 1/3 innings. He has lost three straight starts and has a losing record despite a 3.12 ERA.

Stroman was later seen holding a calmer discussion with Montoyo and Walker.

"We cleared it up right after the inning," Stroman said. "Nobody is even slightly upset."

Stroman also waited on the top step of the dugout to greet Law after he escaped the jam, allowing one run to score.

Stroman has received eight runs of support in nine appearances, and Toronto has failed to score while he was on the mound in six of those outings, including the last three.

"Every little thing that he does seems bigger because there's no runs on the board when he's pitching," Montoyo said.

Nova (2-3) allowed one run and five hits in six-plus innings to win his second straight start.

"I was throwing strikes today and limited the damage," Nova said.

Evan Marshall, Kelvin Herrera and Alex Colomé followed with an inning each, and the White Sox stopped a three-game losing streak.

Toronto has lost nine of 11, and the Blue Jays have scored two runs or fewer in seven of their past nine games.

James McCann matched his career-high with four hits. He singled in the second and seventh innings, and doubled in the eighth and ninth. He raised his average to .376 in 91 plate appearances.

Blue Jays rookie Vladimir Guerrero Jr. went 2 for 2 with two walks in his first multihit game. His first-inning single had a 118.9 mph exit velocity, the second hardest-hit ball in the majors this season behind a 120.6 mph drive by the New York Yankees' Giancarlo Stanton on March 28.

Yolmer Sánchez hit an opposite-field homer to left in the third, and Yoán Moncada added an RBI single later in the inning.

Nick Delmonico chased Stroman with an RBI single in the seventh. Sánchez bunted in a run against Law for a 4-0 lead.

Randal Grichuk homered for the second straight day, a leadoff drive in the seventh.

Toronto acquired RHP Edwin Jackson from Oakland for cash. Montoyo said Jackson will likely join the Blue Jays in time to start at San Francisco on Wednesday. Toronto currently has four starting pitchers on the injured list, including right-handers Clay Buchholz (shoulder) and Matt Shoemaker (out for the season after knee surgery), and left-handers Ryan Borucki (elbow) and Clayton Richard (right knee). When the 35-year-old pitches for Toronto, it would be his record 14th big league team.

Stroman said his conversation with Montoyo ended with a question about his mother, Adlin, who is scheduled to celebrate Mother's Day by throwing out the ceremonial first pitch Sunday.

"I'm going to teach her some things today after the game," Stroman said. "Hopefully, she delivers a strike."

Blue Jays 2B Eric Sogard and Guerrero each made sparkling defensive plays in the first. Sogard made a diving stop and timely throw on Moncada's hard grounder, and Guerrero Jr. made a backhanded stab and strong throw from foul territory to retire Jose Abreu.