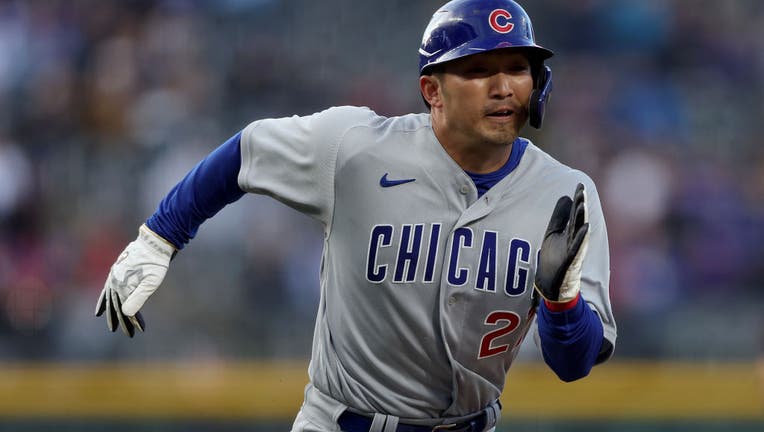 Seiya Suzuki #27 of the Chicago Cubs runs off of third base against the Colorado Rockies in the first inning at Coors Field on April 14, 2022 in Denver, Colorado. (Photo by Matthew Stockman/Getty Images)

DENVER - Seiya Suzuki stayed hot with an RBI double in a three-run first inning, Frank Schwindel homered and drove in two, and the Chicago Cubs cooled off Kris Bryant and the Colorado Rockies, winning 5-2 on Thursday night.

Suzuki extended his hitting streak to six games since joining the majors from Japan and drove in his 10th run when the Cubs collected five straight hits against Kyle Freeland (0-2).

"I’ll take him every day in my lineup," Schwindel said of the two-time Japan Central League batting champ. "He’s just fun to be around. He’s a great hitter and he’s got a great eye, which I think is more impressive, adjusting to the pitching here."

Bryant went 2 for 5 and lost a third hit due to Yonathan Daza’s baserunning gaffe as the Rockies had their four-game winning streak snapped in the opener of Bryant’s second series against his former team.

Bryant, the NL MVP when the Cubs won the 2016 World Series, was traded to San Francisco in July and signed a seven-year, $182 million deal with the Rockies after the lockout.

Schwindel had a run-scoring single in the first and went deep to right to lead off the sixth after the Rockies had sliced the lead to 3-2. Ian Happ’s RBI single made it 5-2 and chased Freeland, who allowed five runs and nine hits in 5 1/3 innings.

"Didn’t have good fastball command, so I had to rely on a lot of my off-speed stuff. And I got singled to death," Freeland said.

C.J. Cron had an RBI single off Ethan Roberts, who also walked in a run after replacing Justin Steele with one out in the fifth. Keegan Thompson (1-0) took over and got Elias Diaz to fly to right with the bases loaded to end the inning. Thompson pitched 3 1/3 scoreless innings.

"I think it’s usually hard to have a really nice curveball in this climate and he looked like he had some pretty good depth to it," Cubs manager David Ross said.

Mychal Givens pitched a scoreless ninth for his first save as the Cubs hung on despite hitting into five double plays.

Bryant singled to left in the third and ninth and hit a liner that fell in front of Happ in left in the fifth. But Daza thought the ball might be caught and was forced at third.

Bryant was the center of attention before the game.

"I want to do what I did there for another team," Bryant said, while noting how few players he knows from the Cubs’ retooled roster. "I enjoyed my time in Chicago, but I don’t know if it warrants a press conference every time I play them."

Suzuki cost the Cubs a run in the third. After reaching on shortstop Jose Iglesias’ throwing error and with Villar at third, Suzuki was doubled off first on Yan Gomes’ one-out flyball to right that should have been a sacrifice fly.

"I thought it was a double," Ross said. "It just hung up and (Charlie) Blackmon got to it pretty quick."

Suzuki also miscommunicated with second baseman Nick Madrigal on Diaz’s fly to shallow right that fell and was ruled a single in the fourth. But with two on, Steele got Iglesias to ground into an inning-ending double play.

Bryant and Ross, buddies and former Chicago teammates, traded barbs before the game.

"It’s hard to see him as a manager because I just think back to ‘Dancing with the Stars’ and ‘Saturday Night Live’ looking like a fool," Bryant said, smiling.

"Why did I have to be Grandpa? I was still playing," Ross said, adding, "I got to watch him grow from a prospect to MVP and all the things he’s done. And he’s a pretty great human being."

Cubs: Ross was back after missing most of Wednesday’s game in Pittsburgh with a stomach illness.