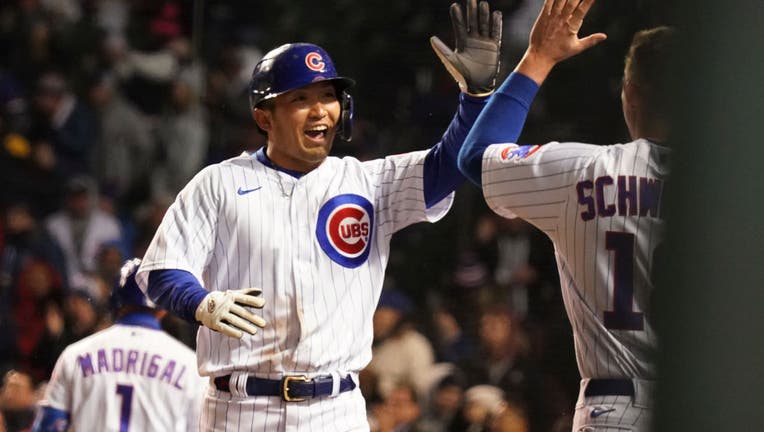 Seiya Suzuki #27 of the Chicago Cubs is congratulated by Frank Schwindel #18 of the Chicago Cubs after he scored during the seventh inning of a game against the Tampa Bay Rays at Wrigley Field on April 18, 2022 in Chicago (Photo by Nuccio DiNuzzo/Get

CHICAGO - Seiya Suzuki extended his hitting streak to nine games, tying Akinori Iwamura for the longest by a Japanese-born player at the start of a major league career, and the Chicago Cubs beat the Tampa Bay Rays 4-2 on a cold Tuesday night.

Suzuki singled to left leading off the fourth, matching the mark that Iwamura set with the Rays in 2007 and tying Andy Pafko’s record for a Cubs player at the start of his career, set in 1943. Suzuki was thrown out by left fielder Randy Arozarena trying to stretch his hit to a double, a call upheld in a video review.

"He seems to be a real steady player," Cubs manager David Ross said. "Confident within himself, having good at-bats. ... He just goes about his business. He’s a hard worker. Good teammate. Things seem to be flowing really easily for him right now."

The 27-year-old Suzuki said he hasnt been overthinking.

"Obviously, we have a lot of great data here, but when you step in the box, there’s some different stuff that you feel," Suzuki said through translator Toy Matsushita. "That’s what is most important. I just have my own data in my head to utilize."

There were intermittent snow flurries throughout the game, and the temperature at gametime was 40 degrees with a 16 mph wind that caused a 34-degree windchill. Several Rays wore handwarmers.

Ian Happ’s RBI single in the eighth against Jeffrey Springs broke a 2-2 tie and drove in Suzuki, who was hit by a pitch from Jason Adam (0-1) leading off the inning.

"In that situation with guys in scoring position, you’ve got to be pretty aggressive," Happ said.

Frank Schwindel homered to right in the eighth off Javy Guerra, who made his Tampa Bay debut, one day after he was acquired from San Diego for cash.

Keegan Thompson got Arozarena to ground into an inning-ending double play in the fifth and struck out five in 3 2/3 innings while allowing one hit.

David Robertson pitched around a walk in the ninth for his fourth save in four chances, one shy of the 37-year-old right-hander’s total from 2018-21. He retired Manuel Margot on a game-ending groundout.

"Mac is doing some special things here through three starts right now," Rays manager Kevin Cash said. "Like that, we got him out to six innings. We’re probably another start or two away from sending him back out there again and adding more pitches, but he gave us every opportunity."

Patrick Wisdom hit his first home run of the season in the second, a drive about three-quarters up the left-field bleachers. The two-run drive scored Suzuki, who reached on a throwing error by shortstop Taylor Walls.

Wisdom has seven hits in his last four games after starting the season 1 for 21.

Tampa Bay tied the score on RBI singles by Ji-Man Choi in the fourth and Josh Lowe in the fifth.

Ross said Thompson helped to flip momentum back toward Chicago in the fifth. He threw 27 strikes on 39 pitches, retiring nine of 11 batters.

"Sometimes you feel like relievers can be the momentum of the game when they come in," Ross said. "They slow things down. They throw strikes. He comes in, he pounds the zone. He works quick. Runners get on and he’s quick to the plate. He’s got multiple weapons."

Thompson said his confidence has increased after going 5-3 with a 2.86 ERA in 63 innings as a rookie last season.

"I think having a little more experience and having some of that under my belt, yes, it does give you a little more confidence," Thompson said. "When you’re throwing it well, you have a lot of confidence as well. I’m excited to get back on the mound between each pitch."

Rays: SS Wander Franco was a late scratch due to quadriceps tightness. The 21-year-old is batting .381 with 16 hits in 10 games. Cash said Franco "feels good" and said he could return to the lineup on Tuesday.

Cubs: LHP Wade Miley is set to throw in the bullpen on Tuesday as he works back from left elbow inflammation. … SS Andrelton Simmons is to take batting practice on Tuesday with the Arizona Complex League Cubs as he rehabilitates from a shoulder injury that has kept him out since late March. RHP Alec Mills will face batters with the Arizona Complex League Cubs on Tuesday after going on the 10-day IL on April 7 with a lower back strain.