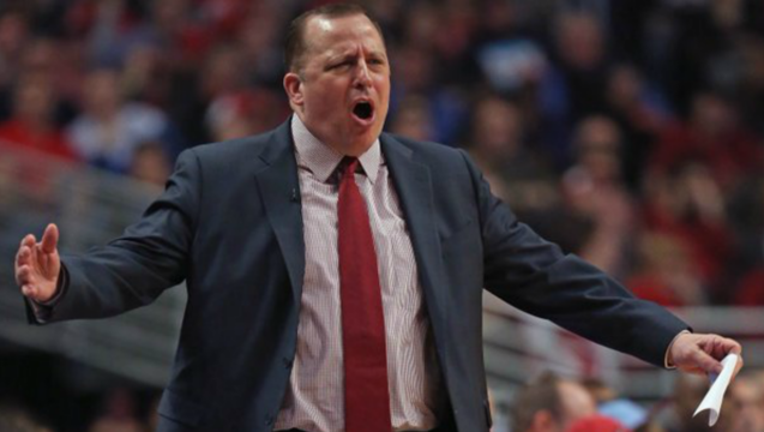 He returns 25 years later as one of the most high-profile coaches in the game, ready to lead a talent-laden young roster out of the abyss.

The Timberwolves hired Thibodeau as coach and president of basketball operations on Wednesday, a power move for a franchise that has been depicted as a basketball wasteland for the last dozen years.

Thibodeau was the most coveted coach on the market, and he's bringing his unparalleled intensity and hard-driving approach to a franchise that has not made the playoffs since 2004. He won nearly 65 percent of his games in five seasons with the Chicago Bulls, but was fired after last season amid speculation of a rift with general manager Gar Forman.

Landing such a big-name coach was a startling development for a Wolves franchise that has the longest-running playoff drought in the NBA and has routinely had to settle for second, third or fourth choices when jobs opened up. But team owner Glen Taylor, armed with one of the most promising young rosters in the league, turned 75 on Wednesday and doesn't want to wait around any longer for the team to become a winner.

"We are extremely excited to welcome Tom Thibodeau back to the Timberwolves," Taylor said in a statement issued by the team. "Through this process we quickly identified Tom as the best leader to shape our talented team and help them realize their full potential."

Thibodeau got a five-year deal worth about $8 million per season and Taylor also spent to bring San Antonio Spurs assistant GM Scott Layden in to serve as the Wolves' general manager and Thibodeau's right-hand man in the front office.

It's a homecoming of sorts for Thibodeau, who got his start in the NBA as an assistant for the expansion Timberwolves under Bill Musselman in 1989. He spent two years coaching the Timberwolves and often recalled those days fondly on return trips with the Bulls over the years.

"I started my NBA career with the Minnesota Timberwolves and it is an incredible opportunity to rejoin the organization at a time when they have what I believe to be the best young roster in the NBA," Thibodeau said in a statement. "Together with a great owner in Glen Taylor and a terrific basketball partner in Scott Layden, I look forward to building a winning culture that Minnesota sports fans can be proud of."

The man they call Thibs is the ultimate grinder, a defensive mastermind that demands as much from his players as any coach in the league. He likely would have garnered interest from many of the teams looking for new coaches, including the Houston Rockets, but couldn't say no to Taylor's offer of complete control.

"The future of the Minnesota Timberwolves has never been brighter and we are very pleased to have Tom as our basketball operations leader moving forward," Taylor said.

Thibodeau will replace Flip Saunders, who was both president and coach before his death in October. Sam Mitchell coached the season with an interim label and won 29 games, 13 more than they had the previous season.

The reasons for taking the job are more than just emotional for Thibodeau. Thanks in large part to the work of Saunders and GM Milt Newton, the foundation includes the last two No. 1 overall draft picks — Andrew Wiggins and Karl-Anthony Towns — along with dynamic shooting guard Zach LaVine, point guard Ricky Rubio and big man Gorgui Dieng, a player Thibodeau coveted in the draft while with the Bulls.

Add to that a shiny new practice facility that opened this season and renovations that are set to begin on the outdated Target Center this summer, and the Wolves job has suddenly and mind-blowingly become one of the most coveted in the league.

Layden was the GM in New York when Thibodeau was an assistant coach under Jeff Van Gundy. Layden also served as GM in Utah during the Stockton-Malone days and will help the lifelong coach Thibodeau with the nuances and intricacies of the executive branch of the franchise.

Giving coaches final authority on the roster has become a bit of a trend in the NBA in recent seasons. Saunders had it and Stan Van Gundy demanded it from the Pistons in order to make the move from Florida to the Midwest. The Los Angeles Clippers gave Doc Rivers dual roles, as did the Atlanta Hawks with Mike Budenholzer after GM Danny Ferry was fired.