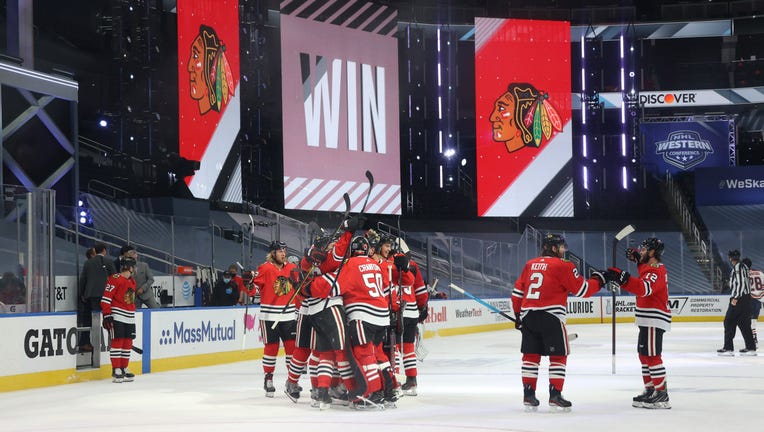 Goaltender Corey Crawford #50 of the Chicago Blackhawks is congratulated by teammates and congratulated one another after Game Four of the Western Conference Qualification Round against the Edmonton Oilers at Rogers Place on August 07, 2020 in Edmont (Dave Sandford/NHLI via Getty Images / Getty Images)

EDMONTON, Alberta - Jonathan Toews and the Chicago Blackhawks used to make the playoffs every year, winning the Stanley Cup three times since the captain’s NHL debut in 2007.

It turns out they still remember how to win in the postseason.

Toews and Co. are headed for the first round of the playoffs after they eliminated Edmonton in the qualifying round for their postseason series victory since they won it all in 2015. It’s their first playoff appearance since they were swept by Nashville three years ago.

“We were pretty eager to get this chance and show what we can do,” Toews said after Chicago’s clinching 3-2 victory over Edmonton in Game 4 on Friday night. “Technically, we just made the playoffs now, so the real fun begins.”

Next up is an old friend. Robin Lehner made 32 saves to help Vegas to a 4-3 overtime win over Colorado on Saturday, clinching the Western Conference’s No. 1 seed for the Golden Knights and setting up a matchup with the Blackhawks.

Lehner was acquired by Vegas in a Feb. 24 trade with Chicago, back when the playoffs looked like a real long shot for the Blackhawks.

“It’s going to be fun playing them,” Lehner said. “They’re a very good hockey team. I have a lot of respect for them, the whole organization. I really like it here. I think we’re a great hockey team. I think we’ll do well against them.”

Chicago was in last place in the Central Division when the NHL suspended its season in March because of the coronavirus pandemic. It only got a chance to play again when the league decided to go with a 24-team format for its return to the ice.

But the Blackhawks were playing well before the season was put on hold, winning five of seven. Key defenseman Calvin de Haan got healthy during the pause in play, and the team was determined to make the most of its unexpected opportunity when it got back together for training camp.

“You know, for us, it didn’t really matter what seed we were, we knew what we were doing later in the season that helped us play great hockey, win games,” Toews said. “And we got right back to that.”

The 32-year-old Toews led the way in a performance reminiscent of his past postseason success. He had four goals and three assists in the series against Edmonton. Rookie Dominik Kubalik also played well, scoring the game-winning goal Friday.

But the most hopeful development for the Blackhawks heading into their series against the Golden Knights might have been the play of Corey Crawford, who had 43 saves in Game 4. Crawford got a late start for training for the qualifying round after he tested positive for COVID-19.

“I think across our lineup, guys stepped up their game,” Toews said. “You know, got a lot of young guys who maybe don’t have a ton of playoff experience showing what they can do. And I think that gets you going and motivates you more than anything. So just try and do my part and go out there and do what I can and follow suit with the rest of our team. So it was fun to see.”