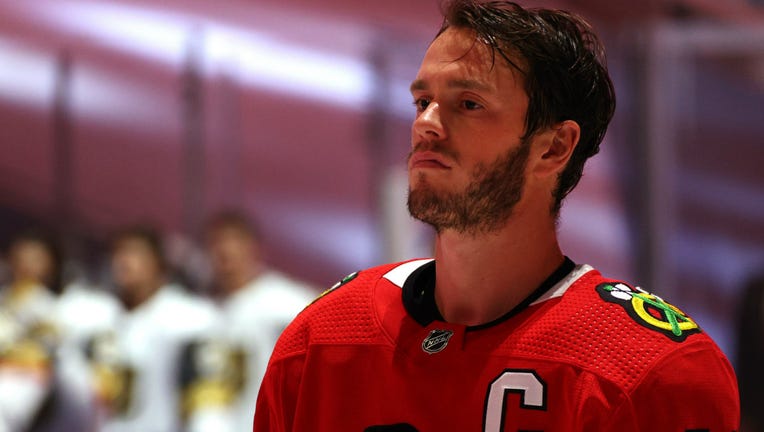 CHICAGO - The question hovered over the Chicago Blackhawks throughout a promising season, and it remains in place right now.

What exactly is going on with Jonathan Toews?

The 33-year-old captain, a three-time Stanley Cup champion and one of the NHL’s most highly regarded leaders, missed the entire season after he announced in December that he was dealing with an unspecified medical issue that left him feeling "drained and lethargic."

Since Toews’ announcement, there has been no substantive update from the team on his condition or his plans. Toews recorded a video congratulating longtime teammate Patrick Kane on his 1,000th game in March, but he hasn’t been seen around any of the team’s facilities all year.

"I know he’s hopeful to feel in a position where he’s ready to play," Bowman said. "Obviously that wasn’t the case right here and now, which is why he didn’t rejoin the team, and I don’t know that any of us can map out when that will be."

What’s next for Toews is perhaps the most pressing issue for a team that took some small steps forward this year.

"I miss him in a lot of ways," Kane said. "Off the ice, obviously, he’s a great leader, great friend. You miss him just in that sense. And then on the ice, for me, I think it makes things a lot easier, too.

"You expect him to be back next year. Hopefully he’s back. He’s obviously a huge part of the team and the organization."

Playing without Toews, Chicago missed the postseason for the third time in four years. But it stayed in contention for much of the season, boosted by solid contributions from some of the team’s youngest players.

The Blackhawks had an NHL-high 42 goals scored by rookies. Alex DeBrincat, 23, elevated his play in his fourth season, finishing third in the league with 32 goals. Wyatt Kalynuk, 23, and Adam Boqvist, 20, were among a group of young defensemen who had some encouraging moments.

"I think going into the year there could have been a few guys who maybe were on the borderline of even making the team I think, and they really stepped up and became big players for us," DeBrincat said. "It’s awesome to see that."

Bowman announced during a live online podcast with fans that the team had agreed to a two-year contract with Henrik Borgström. The team acquired the rights to the 6-foot-3 center in an April trade with Florida.

Borgström, 23, was selected by the Panthers in the first round of the 2016 draft. He played in Finland this year.

"He’s a big kid. He’s got great skills," Bowman said. "Can be a dynamic offensive player. He brings the size, skill, skating. Obviously he’s got to translate that to the NHL game."

Kane finished with 15 goals and 51 assists, tied with Edmonton star Leon Draisaitl for second in the NHL. But the dynamic winger scored just four times in his last 33 games, and he said Tuesday he has been dealing with an injury since the end of last season.

"I’m not going to tell you exactly what it is, but just, like I said before, it was just something that I’ve kind of been dealing with maybe up close to returning to the bubble last year," he said. "I feel like we’ve done a lot of good things to make it feel good in games, and then other games it hasn’t felt as great."

Goaltending was one of Chicago’s biggest issues heading into the season, but Kevin Lankinen turned into a pleasant surprise and Malcolm Subban also had his moments. Collin Delia finished strong after a tough start. All three goaltenders are under contract for next year.

The 26-year-old Lankinen went 17-14-5 with a 3.01 goals-against average and a .909 save percentage. He faded late during his first season in the NHL, and the Blackhawks could look to add a more established goalie to pair with him for next year.

"I think Lanks, again, he also has had a successful year as far as where he started and where he’s ending," coach Jeremy Colliton said. "But it should be just a stepping stone. At least that’s how I hope he looks at it. He’s got to do everything he can to continue to improve."

The Blackhawks have a pair of intriguing decisions to make with 24-year-old forwards Pius Suter and Dylan Strome.

Suter is eligible for restricted free agency after collecting 14 goals and 13 assists in 55 games during his rookie season.

Strome is under contract for next year, but he had just nine goals and eight assists in 40 games this season. The No. 3 pick in the 2015 draft was a healthy scratch for four of the team’s last 10 games.

"It wasn’t a great year, but some things to build on and I learned a lot about myself, too," Strome said.